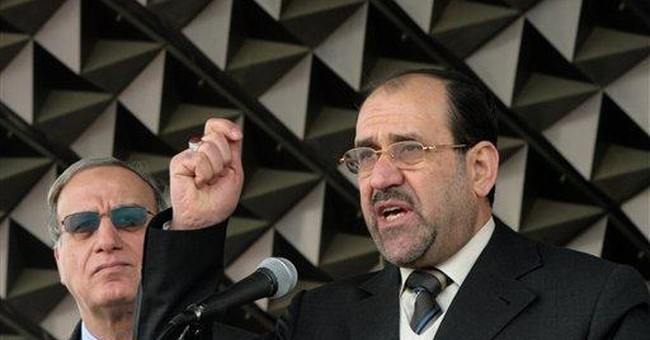 Everybody who is not a part of the let's-leave-Iraq-now-and-to-hell-with-the consequences crowd seems to agree that the key to stabilizing Iraq, so we can prudently bring our troops home, is forging a political reconciliation between Iraq's Shiite-dominated government and its Sunni minority.

The question is what role the U.S. military ought to play in achieving this political aim.

In a recent Washington Post op-ed, Sen. John McCain explained why he believes the president's planned troop "surge" is the way to go.

"The presence of additional coalition forces would allow the Iraqi government to do what it cannot accomplish on its own -- impose its rule throughout the country," said McCain. "In bringing greater security to Iraq, and chiefly to Baghdad, our forces would give the government a fighting chance to pursue reconciliation."

One way of evaluating this strategy is to begin with the realization that President Bush is about five times more popular in San Francisco, arguably America's most liberal city, than the Iraqi constitution is in Anbar, Iraq's most Sunni province.

In 2004, Bush won 15.3 percent in San Francisco. In an October 2005 referendum, the Iraqi constitution won just over 3 percent in Anbar.

In 12 of Iraq's most heavily Shiite and Kurdish provinces, by contrast, the constitution won at least 94 percent.

All-important Baghdad split 77.7 percent for the constitution, 22.3 percent against.

When compared to attack data published in the November Defense Department report "Measuring Stability and Security in Iraq," these results become almost perfect predictors of violence. Where sizable blocs voted against Iraq's constitution, attacks are numerous. Where they didn't, they aren't.

In the pro-constitution Kurdish and Shiite provinces, there were almost no attacks.

Sunnis clearly don't want to be governed the way they fear they will be by the current Shiite-dominated government.

Just as political parties in our country have well-known, longstanding agendas -- i.e., Democrats tend to favor higher taxes and Republicans don't -- so, too, do parties in the Middle East. The Baath Party, to which many Iraqi Sunnis adhered, endorses secular Arab nationalism. Its best-known leaders, such as the late Hafez al Assad of Syria and the recently executed Saddam Hussein, were ruthless secular dictators.

The parties that dominate Iraq's Shiite-controlled government -- Dawa al-Islamiya ("Call to Islam"), the Supreme Council for the Islamic Revolution in Iraq (SCIRI) and the Sadrists -- are Islamist. Dawa, Iraq's original Islamist party, and SCIRI, which was inspired by the late Iranian Ayatollah Khomeini, operated in exile in Iran during Saddam's reign. Iraqi warlord Moqtada Sadr is a cousin of the late Dawa founder Ayatollah Muhammad Baqr al Sadr. Prime Minister Maliki belongs to Dawa.

McCain's suggested strategy of using our military to impose the rule of the current Iraqi government throughout Iraq means imposing on Sunnis a government run by Shiite Islamists. That this would increase the chances that the Shiite Islamists would make sufficient concessions to the Sunnis to inspire the Sunnis to join in a peaceful political process is problematic.

A memo that National Security Adviser Stephen Hadley sent to President Bush on Nov. 8 is enlightening. It described the Shiite government brutally moving to consolidate its sectarian power, and questioned only whether Maliki was a "witting participant" in this movement of his own government.

"Despite Maliki's reassuring words, repeated reports from our commanders on the ground contributed to our concerns about Maliki's government," wrote Hadley. "Reports of nondelivery of services to Sunni areas, intervention by the prime minister's office to stop military action against Shia targets and to encourage them against Sunni ones, removal of Iraq's most effective commanders on a sectarian basis and efforts to ensure Shia majorities in all ministries -- when combined with the escalation of Jaish al-Mahdi's (Sadr's Mahdi Army) killings -- all suggest a campaign to consolidate Shia power in Baghdad."

Before he was fired, Secretary of Defense Donald Rumsfeld offered an alternative to McCain's "surge." He suggested moving our troops out of the danger zones in cities and on patrols, but keeping them in Iraq to narrowly target al-Qaida cells, stop all-out civil war, and deter intervention by Iran and Syria.

This would have sent a stark message to the Shiite government: Make peace with your Sunni neighbors -- because the U.S. military will not subdue them for you.

That would have been tough love for Maliki and his Islamist friends. But tough love is sometimes the only thing tough characters understand.