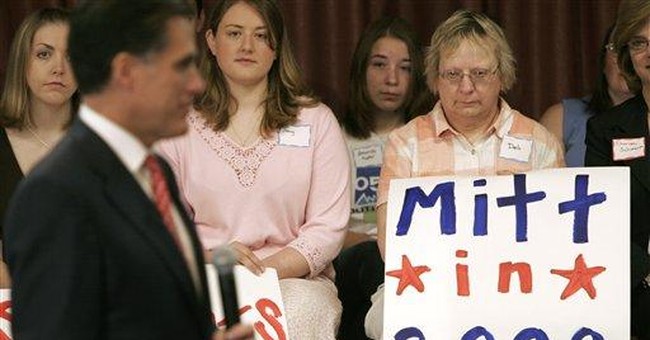 The GOP presidential primary has so far been a lot of fun, and very fluid. There have been significant fluctuations in the conventional wisdom of how it will play out, and I am sure that trend will continue in the months ahead.

As an obviously biased believer in my Dad, Mitt Romney, I have been delighted by the steady gain in momentum his candidacy has received. The more people get to know him, the more they like him. He is a strong leader and strong communicator, with strong values. He has a clear vision for how to keep America the economic and military superpowers of the world, while at the same time, serve as a beacon of goodness, compassion, family values, and integrity.

This week, Republican voters across the nation will have another opportunity to see the (count them!) 10 presidential candidates debate the issues and state their cases. Like the last debate, I am confident that most of those who have not yet had a chance to hear from my Dad will become new supporters.

They will hardly be alone. In a 24-hour period starting that evening, we plan on enlisting 24,000 new Romney supporters through an innovative effort called “Sign Up America,” our largest grassroots event yet.

We plan on bringing in these new supporters through online social networks, Debate Watch House parties, financial contributions, visits to MittRomney.com, and through calls to 866–WIN–MITT. Supporters across the country will man call banks and send emails to friends, inviting them to join Team Romney.

I have to admit that when I first heard about the program, I was skeptical. Twenty-four thousand new supporters in 24 hours? But my Dad's message is resonating, and people are responding. And like National Call Day when we raised $6.5 million in one day, my Dad has consistently used innovation, creativity, and hard work to accomplish seemingly impossible tasks. He turned around the 2002 Winter Olympics and then became governor of Massachusetts, where he turned deficits into surpluses, and stalemates over health care and education policy into consensus and solutions.

His campaign is run with a similar philosophy. Just as his policies are aimed at bringing innovation and transformation to Washington, we’re striving to bring dynamism to our political outreach efforts. No campaign in either party has matched the Romney online effort, whether in our use of web video (over 1.5 million views to date), new media outreach, rapid response, or creating connections through online social networking platforms (e.g. he was the first candidate to have a Facebook profile).

In our constant effort to reach new voters, my Dad was the first presidential candidate to agree to participate in the upcoming Townhall.com/Salem Communications debate. With this future event, he will be talking about the issues important to Americans in an innovative use of the new media.

My personal favorite online feature is a blog that I and four of my brothers launched called the 5 Brothers Blog, where we are able to share a bit of a behind the scenes look at the family and campaign that you cannot get anywhere else.

But this is not just about staying ahead of the technology curve. It is about reaching new voters in ways that they can appreciate and use. It recognizes that in a compressed news cycle, the only way to reach many voters effectively is through constant engagement, on multiple platforms. I have heard countless stories of people who turned into MittTV and were able to watch my Dad deliver a speech that moved them in such a way to become an active supporter, volunteer, and contributor. We are no longer dependent only on the MSM to deliver our message – we can reach out directly to the individual voters in their homes.

That’s why Sign Up America is such an important project. We have built incredible momentum behind my Dad’s campaign – momentum that means more than campaign dollars and much more than the approving words of a few pundits. It is this kind of spirit which can deliver victory in a political campaign, and bring about a new spirit of leadership for this country. Come and be part of this effort, and join Team Romney on May 15. You will make history.