Tagg Romney recently moved from Los Angeles to Boston to serve as a senior advisor and surrogate for his father in the Mitt Romney for President Exploratory Committee.

In Los Angeles, Tagg had been working for the Los Angeles Dodgers organization as Chief Marketing Officer. In that capacity, he managed TV and radio broadcasts, all advertising efforts, and the in-game entertainment at Dodger Stadium for the 2006 season.

Prior to his time with Dodgers, Tagg worked for Reebok. In 2003, he took a position as Director of Strategic planning at Reebok, where he developed the brand's 5-year strategic plan. Tagg worked on the initiative to re-brand Reebok and helped launch the "I Am What I Am" Campaign. In 2004, he was promoted to the position of Vice President of OnField Marketing, where he led Reebok's marketing efforts and partnerships with the NHL, NBA, and NFL.

In 2001, Tagg joined his father's successful campaign for Governor of Massachusetts, serving both as manager of Kerry Healey's campaign for Lieutenant Governor and also as deputy campaign manager in charge of direct mail and phones for the general gubernatorial election.

In 2000, Tagg founded and ran his own company, Season Ticket Solutions. The firm developed software that professional sports teams used on their web sites to allow season ticket holders to resell their tickets. In 2001, Tagg sold the business to a competitor.

From 1998-1999, Tagg served as the Director of Strategic Planning at the bio-pharmaceutical firm Elan Corp. in Dublin, Ireland.

Tagg has been happily married to Jennifer Romney for 14 years and together they keep busy by volunteering at their local church and by raising their three children, Allie (11), Joe (5), and Thomas (3). 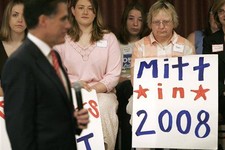 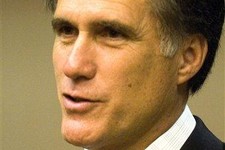 Why I Think You Should Vote For My Dad
April 02, 2007
Commentary Archives
CARTOONS | AF Branco
View Cartoon