Submerged In A Din Of Identity Politics

Suzanne Fields
|
Posted: Jul 27, 2018 12:01 AM
Share   Tweet
The opinions expressed by columnists are their own and do not necessarily represent the views of Townhall.com. 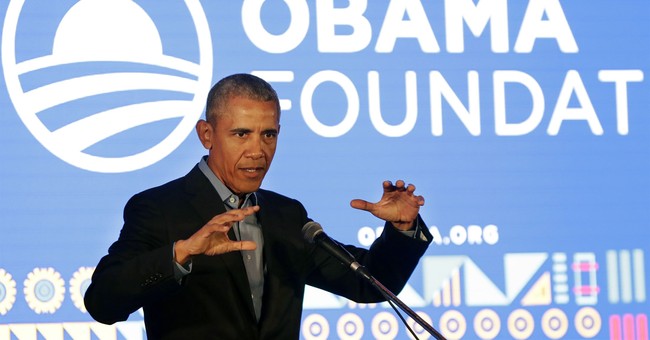 The human animal seems hard-wired for tribalism, and the ties that bind are shaped by our compelling need to group together, obeying calls for loyalties and exclusions. Some groupings not only contribute to the gratifications of bonding, whether in family, clubs, choirs or loyalty to sports teams, but also provide the glue that holds a community together.

But tribes become the "factions" that former President George Washington warned against in his Farewell Address, heightening differences and rivalries that the Founding Fathers hoped to dilute through checks and balances in the three branches of government. In the age of the internet, tribalism asserts itself in the flood of outrage stories that bombard us hourly, and make us angry and hostile toward those with whom we disagree.

Former President Barack Obama, who had all but vanished from public life, opened a conversation about identity politics in a speech in South Africa the other day during the 100th anniversary of the birth of Nelson Mandela, warning that democracy is served poorly when identity is the organizing principle.

"But democracy demands that we're able also to get inside the reality of people who are different than us," he said, "so we can understand their point of view. Maybe we can change their minds, but maybe they'll change ours."

It's tempting to dismiss an argument offered by a former president and the current one if we don't like things that are said, even when it's reasonable. There's no room for debate, and everyone is quickly labeled as either hateful or stupid for expressing a different point of view. It's us against them, and a mean spirit becomes a contagion, splintering us into subgroups of animosity left and right, culturally and politically.

"A shift in tone, rhetoric, and logic has moved identity politics away from inclusion -- which had always been the left's watchword -- toward exclusion and division," writes Yale Law professor Amy Chua in "Political Tribes: Group Instinct and the Face of Nations." Facebook now lists over 50 genders ("sexes," they used to be called) for argument, "from genderqueer to intersex to pangender," as it competes to take equal opportunity offense. The competition for victimization has become a crowded field.

Jonathan Haidt, author of "The Righteous Mind," who has studied political polarization since 2007, observes that both sides of the political spectrum show increasing dislike for the other and think the other a threat to the country. The parties, which once included an uneven mix of conservatives and liberals, contrive now to be so ideologically "pure" that opposing voices within are quickly silenced.

The term "identity politics" is heard often in the news and on social media to animate our own ideas and prejudices, some good, some not so good, in our multicultural country. But what does "identity politics" actually refer to? Whose identity? Whose politics? The questions run through conversations on the beach, at a bar and around the barbecue grill, overheard in the swimming pool or on a picnic blanket, addressed casually between men and women of different ages, and in different locations where people congregate.

Summer brings people together from many walks and places of life, backgrounds and traditions. They once could meet during the happy and laid-back season without the baggage that disrupts and angers debate on politics and current events. But now, not so much. Politics seems to be permanently polarized. After old friends and summer acquaintances move through congenial conversations about family, relationships, work, play, baseball, sometimes soccer, the scorching heat or the dreary rainy day, identity politics emerges as a common theme. It asserts itself like a snake coiling around the base of a tree and becomes a dangerous disruption of neighborly cohesion. Whether black, white, Hispanic, Asian, male, female, gay, straight, Jewish, Christian or Muslim, identity politics forces us to think in terms of differences and not the many good things we cherish and hold in common.

The imperfect melting pot that once united us as unhyphenated Americans has boiled over into an indigestible stew, giving people heartburn and indigestion and no longer providing a way for smoothing over differences. The temperature of social discourse inevitably rises. Identity politics and the revival of a tribal mentality may be the most deleterious affliction with which we as individuals and as a nation must contend.

When Martin Luther King Jr. led the civil rights struggle, he aimed for a national reconciliation to redeem an inclusive American dream. Former President Abraham Lincoln, who sought healing in the few days he had left after the Civil War, urged us to listen to "the better angels of our nature." But those angels, as he knew, are fragile and easily destroyed in the din of identity.