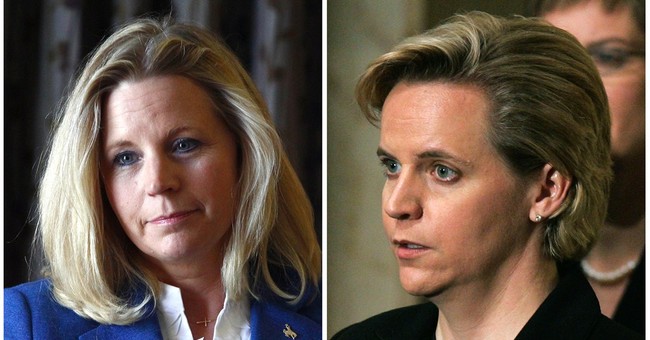 You could call it the "Catfight at Cheney Corral" (but if you do, you should expect feminist outrage). When Liz Cheney moved from the suburbs of the nation's capital to Wyoming to run for the U.S. Senate, she knew she was asking for trouble. She risked being called a "carpetbagger," but that has a sharper sting in Virginia than in Wyoming. She pulled intimate and sensitive family laundry out for a public airing by emphasizing her conservative roots.

Acknowledging that her sister was in a gay marriage, which isn't recognized as a true marriage in either Virginia or Wyoming, she said it was just "an area where we disagree."

That message could have been lost had it been sent from Wyoming by Pony Express, but in the age of Facebook, Twitter and email, fighting words are bathed in adrenalin and dispatched for instant arrival. Mary, her lesbian sister, and Heather Poe, Mary's wife, as recognized in 15 states and the District of Columbia, responded quickly with anger. Mary said Liz was "on the wrong side of history." Heather said it was "offensive" to hear that Liz doesn't "support" their union and called attention to Liz's recent change of address: "I can't help but wonder how Liz would feel if, as she moved from state to state, she discovered that her family was protected in one but not the other."

With neither Wyatt Earp nor Doc Holliday in sight, Papa Cheney, who knows what it feels like to be caught in the crossfire of politics, jumped on his not-so-high horse to ride to separate his daughters. Alas, he didn't have much to offer beyond paternal affection and his own moderate position on same-sex marriage. Dick and Lynne Cheney released in writing a statement that Liz "had always believed in the traditional definition of marriage."

Feuds in famous families make juicy copy, but this one has few national portents. The seat is now held by Mike Enzi, a Republican, and short of a tsunami (rare in Wyoming) or a colliding planet, it will remain Republican. Liz is the longest of long shots; one Republican poll shows her trailing Mr. Enzi by 53 points. Her call for a "new generation" to represent Wyoming smacks more of attempted opportunism and "ageism" (her opponent is 69 and she is 44) than policy differences, but with daddy's assistance, she raised more money in her first quarter than the incumbent, who looks like he won't need it.

All politics is local and in Wyoming local is Cody, Casper, Laramie and Cheyenne, and other names known to most Americans only from Western movies. "These types of tiffs between the two sisters, that really isn't the headline drawer for us," Kyle Roerink, a reporter for the Casper Star-Tribune, tells Politico, the Capitol Hill political daily. "What we want to report on here in Wyoming, what matters most, is where they stand on policy." Refreshing, if true.

Nevertheless, the showdown at Cheney corral illustrates a problem for Republicans in 2016, as the social issues affect policy. Gay marriage is no longer the hot button it was now that 15 states and the District of Columbia recognize same-sex marriage as legal, and some polls show a bare majority of Americans saying it's OK. The Supreme Court has decreed that federal benefits cannot be denied to same-sex couples.

Family values, a winning theme for Republicans, has become more "nuanced" as family members come out of the closet. Sen. Rob Portman of Ohio, a Republican, changed his mind when his son told him he was gay. He joined nine other Republicans to vote for legislation forbidding employment discrimination toward gays.

Papa Cheney, as vice president, supported state-sanctioned gay marriage when President Bush supported a federal ban. Mary, his angry lesbian daughter, campaigned for the Bush-Cheney ticket, though her support was obviously more personal than political. Log Cabin Republicans, who support gay marriage, are not always single-issue voters, and usually support conservatives on economic and defense policy issues. They say the split in the Cheney family is "emblematic" of discussions taking place in many Republican families.

It took four days to film the famous gunfight scene between feuding families in the movie version of "Gunfight at the O.K. Corral." The catfight at Cheney corral is likely to fade sooner than that, and long before the gay marriage issue is settled among Republicans and other conservatives.