Betrayal is a Game any Number can Play 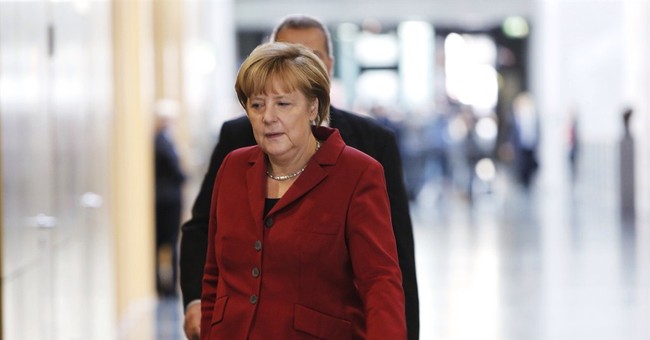 When the Germans found out from Edward Snowden that America's National Security Agency had spied on Germany, an outraged German artist projected onto a wall at the American embassy the words "United Stasi of America." Chancellor Angela Merkel was not so outraged. She said that American and German intelligence services had been working together in the service of the security of both countries.

The comparison to the Stasi was absurd, particularly to Frau Merkel, who grew up in the East and who knew well the efficiency and extent of Stasi surveillance. When I was in Berlin earlier this month, the old Stasi prison opened a permanent exhibit revealing just how the victims of the Stasi suffered. The Berlin-Hohenschonhausen Memorial exhibition shows the horrible conditions where innocents and dissidents were incarcerated.

The Stasi infiltrated every corner of ordinary life. It was both a secret service and a secret police, a powerful combine for invading the private lives of everyone through its ugly network of neighbors, friends and even families who spied on each other. The Stasi employed more than 91,000 full-time employees with 189,000 "unofficial employees," informal informers from all parts of society who supplied information about everyone they knew.

"Workers wrote reports about their colleagues, teenagers about their fellow classmates, soldiers about their comrades," says Miriamne Fields, the English translator for the exhibition (and, coincidentally, my daughter). "Friends betrayed friends, and sometimes family spied on each other."

When the Berlin Wall began to crumble, assisted by those escaping from behind the Iron Curtain, the Stasi went to work to destroy the evidence of their evil. But like a computer hard drive that is all but impossible to erase, all that Stasi paper couldn't be shredded. The task made more difficult by the shoddily constructed German shredding machinery. Like figures in a comedy whose disguises fall away when hotly pursued, Stasi employees were reduced to tearing up the paper records with bare hands and stuffing millions of bits and pieces into 16,000 plastic garbage bags, ironic vessels of their nasty work.

Their pre-tech primitive filing system of scraps and snippets was left behind in Stasi offices when the spies fled the freedom posse. The shreds, however, were rescued and modern digital scanners are archiving the tattered remnants. Technicians at the Berlin Fraunhofer Institute have built an "e-Puzzler" that can piece together the paper fragments into coherent documents. This is "cutting edge" technology, literally and figuratively, and will enable surviving victims of the Stasi to find out who informed on them.

Germans today take to heart and mind philosopher George Santayana's observation that "those who cannot remember the past are condemned to repeat it." After two world wars, the Holocaust and a savage Communist regime, the Germans, like the Ancient Mariner, are obsessed with telling their story to atone for their past. The Stasi exhibition speaks to the atrocities committed by Germans against their own as well as against civilization.

The latest dump of information from Edward Snowden's supply of documents from the National Security Agency, published in The Washington Post, reprises the image of the NSA as the "Stasi on steroids." Such hyperbole doesn't identify the best way to secure collective safety in the age of terrorism, but it's hardly comforting to learn there's still another program collecting hundreds of millions of lists from personal emails and instant messaging services from around the world. This program has collected data from unsuspecting Americans, even though Americans, so we're told, weren't deliberately targeted.

"We are not interested in personal information about ordinary Americans," says Shawn Turner, a spokesman for the director of National Intelligence, which oversees the NSA. He insists the agency works according to the attorney general's rules to "minimize" information identifying American citizens. The program, he says, aims instead at foreigners who may be terrorists, human traffickers and drug smugglers. The emphasis, as in other counterterrorism programs, is on finding "the haystack that hides the needle." But the government isn't exactly on everyone's Christmas card list this year. The fact that the program is subject only to oversight by the White House, rather than the stricter rules that govern domestic data collection, hardly reassures anybody.

Sen. Dianne Feinstein, chairman of the Senate Intelligence Committee, says the NSA has made Americans more secure, and she wants more transparency. But Congress is not very popular, either. Gen. Keith B. Alexander, director of the NSA, says the Snowden revelations have caused irreparable damage. In maintaining that delicate balance between security and civil liberties, the most important task is making sure that the dry straw of that haystack doesn't ignite a fire that will burn us all.