Shackles for the British Press 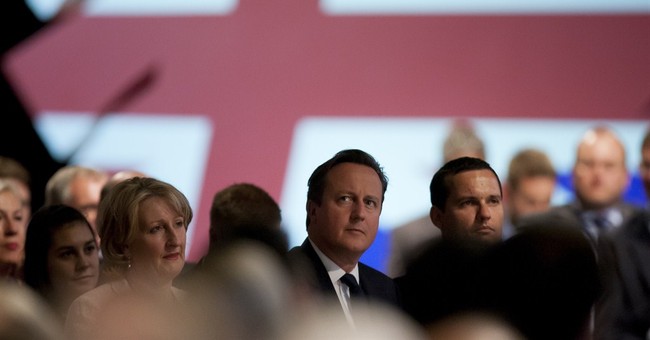 LONDON -- Nobody likes a newspaper fight like the British. Such fights are great entertainment in a land where newspapers are full of ginger and the language lends itself to insult by rapier rather than bludgeon. London has seen a lulu over the past several days, spiced with accusations of anti-Semitism, disrespect for the dead, invocations of Hitler and the Nazis, reminders of '30s aristocrats soft on der feuhrer and of hatred of Britain.

"Them lyin' newspapers," as generations of politicians right and left have called them in America, are no less the targets of rotten eggs and squishy tomatoes in Britain, where there is no First Amendment, and libel laws are stricter than in the United States.

Everything came together in a perfect storm Wednesday when the secretary for culture in Prime Minister David Cameron's cabinet announced that the government would introduce "press regulation" that editors and publishers say threatens to bridle the press for the first time in 300 years.

Tom Harris, a former Labor minister, says his party is undermining freedom. "My party is turning its back on a core tenet of progressive politics," he wrote in the Daily Telegraph, "that a genuinely free press, however infuriating, is an indispensable foundation stone of democracy."

The very idea sends shudders up the spine of Americans, even those of us who often criticize the bias and arrogance of our own press. If it happens here in the Old Country, whence come so many of our freedoms, it could one day happen to the land of the free.

The politicians here have been chafing forever under the lash of the London newspapers, which left or right make only small pretense of hiding partisan prejudices. One advocacy group campaigning for government regulation, called Hacked Off, met last March with representatives of the Conservative, Labor and Liberal Democratic parties in the offices of Ed Miliband, the leader of the Labor Party, to plot strategy. Nobody from the newspapers were invited. The secretary for culture later admitted "the meeting looked bad."

But most of the politicians, having chafed so long under the lash of the men who buy ink by the barrel, pressed on, waiting for the government to come up with the actual regulatory scheme.

Then, on Sept. 27, the Daily Mail, regarded as the most powerful newspaper in Britain, published a long essay about the late father of the leader of the Labor Party, titled "The Man Who Hated Britain." The father, Ralph Miliband, who was a Marxist professor at the London School of Economics, certainly had his doubts about the country he adopted as a 17-year-old immigrant from Poland in 1940. He, like his father -- the grandfather of the leader of Labor -- was a committed, and precocious socialist. He wrote in his teenage diary that "the Englishman is a rabid nationalist. They are perhaps the most nationalist people in the world . . . you sometimes want them to lose [the war] to show them how things are . . . " He grew up to be a fierce skeptic. He rallied opposition to the Vietnam War, mocked the British recovery of the Falklands in 1982, and railed at capitalism. The Mail called him "Red Ed," and noted that he is buried "12 yards from Karl Marx" in London's Highgate Cemetery. Others pointed out that he was a Jew.

Thus, the storm. The son and his friends accused the Daily Mail of anti-Semitism, and recalled that Lord Rothermere, the wartime president and publisher, was prominent among English aristocrats who admired Hitler and the Nazis through the '30s. Nearly every London paper joined in the din. Even the New York Times published an anguished op-ed about it.

The story is not a simple one. The Mail essay was written by Geoffrey Levy, a Jew, and defended most stoutly by Jon Steafel, the deputy editor of the Mail and a Jew. Many senior journalists at the Mail are Jewish, and the Mail wears its affection and support for Israel on its sleeve, in big, bold print. The Mail refuses to apologize -- the culture of apology is not as advanced here as in America -- though an executive at the Mail says he wishes his editors had written a better headline.

Anti-Semitism in England is alive and well here, but it's old news. The classics of English literature reflect it, from Chaucer and Shakespeare through Thackeray, Chesterton, H.G. Wells, Evelyn Waugh, Graham Greene and Virginia Wolfe. But the frenzy over the Mail piece is likely to subside now. The threat against freedom of the press will sober up every newsroom in town