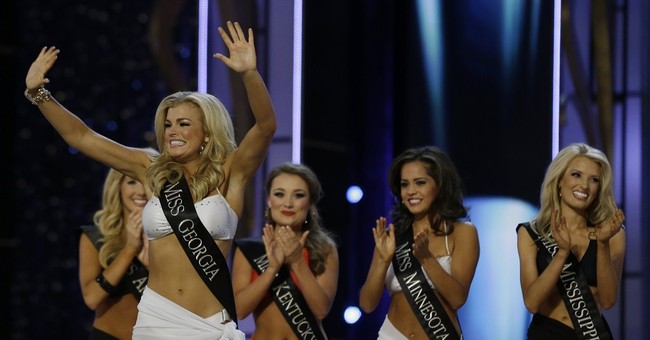 Miss America is back in town. After being exiled to Las Vegas for seven years, the pageant moved home to its birthplace for an end-of-summer carnival of kitsch and kicks, beautiful women romping in the sand and dipping toes in the sea, and showing their gams to the boardwalk empire. That's entertainment -- and it's big business.

The founders in 1921 were the Atlantic City Businessmen's League, eager to keep tourists in town for one final week after Labor Day, a fall frolic before cool weather closed the beach and the boardwalk. Newspapers in those days often ran beauty contests to promote circulation, and Atlantic City set out to find "the most beautiful bathing girl in America." Casinos are the investors today and bathing beauty is still good business. This year's show was estimated to bring in $30 million for a city getting over last year's Hurricane Sandy.

Some feminists still complain that Miss America deserves to go the way of corsets, girdles and sturdy cotton underwear, as if they've never heard of Spanx, part of the big business of body-shaping undergarments. Victoria's Secret hasn't kept one for years, and the cosmetics industry is more or less recession-proof. Pretty girls and looking good continue to be as American as tacos and pizza.

Beauty lies in the eye of the beholder, of course, but the modern Miss America combines smarts with sexiness, and the pageant has awarded $45 million in scholarships to young women. (The first Miss America got $100.) Many contestants have worn caps and gowns as well as bikinis in heels, and evening gowns with naughty decolletage. Miss California, this year's runner-up, earned bachelor's and master's degrees in four years at Stanford.

Nina Davuluri, the new Miss America from New York, has a degree in brain behavior and cognitive science from the University of Michigan, where she made the dean's list and intends to spend her $50,000 scholarship on medical school. For the year of her "reign," her "support project" is STEM education, STEM for science, technology, engineering and mathematics. Men far outnumber women with college majors in these fields and despite Larry Summers' suggestion that nature intended it that way, Miss America wants to encourage young women to prove him wrong. She flashed a bit of provocative political humor as Miss New York, introducing herself with a warning to the audience to "be careful of the pictures you tweet in my state."

Some of the talent lent itself to satire, such as Miss Florida twirling a baton with a sequined leg brace after she tore two ligaments in her knee during rehearsal. But she dazzled the judges with three batons in the air at once and won the talent contest because she was flawlessly good.

Like a night at the Academy Awards, the interview segments are usually less inspiring than the fresh good looks of the young women. Topics ranged from when and whether to have cosmetic surgery to whether Barack Obama should bomb Syria. Fortunately, the answers were only worth 5 percent of a contestant's total score.

This year, the beauty, like just about everything else, was polarized by politics. Miss Kansas, a tattooed, gun-totin' Army National Guard sergeant, was the call-in choice of viewers. They elected her to the semi-finals, and her fans were angry when she didn't win the whole thing. Several fans blamed her loss on "liberal judges," but her partisans didn't notice that her rendition of a Puccini aria needed work. She wanted to show off her skill in archery like an Amazon woman, but the judges wouldn't allow arrows flying across the stage.

In an age with no scarcity of women letting it all hang out on the Internet, there's considerably less criticism than there used to be that a beauty contest exploits women. But the Internet gives every yahoo with a laptop the idea that he has something important to say and the opportunity to parade ignorance and bigotry. The website BuzzFeed gathered the worst examples of the name-calling of Davuluri, most of them that because she's dark and of East Indian ancestry she's somehow not eligible to be the American girl next door. Tweeters called her a "terrorist," a "foreigner" (she was born in Syracuse) and a "slap in the face to the people of 9/11." One tweeter asked, "When will a white woman win Miss America?" (Black women were barred until 1970; there have been seven black Miss Americas since.)

The talented Davuluri has a gift for dealing with hecklers, too. When a reporter asked her at her first press conference what she thought of the Internet intolerance, she replied: "I have to rise above that. "I always viewed myself as first and foremost American." To reprise slang for a beauty from the past, it was a knockout from a knockout.