The Improbable 'God in the Machine' 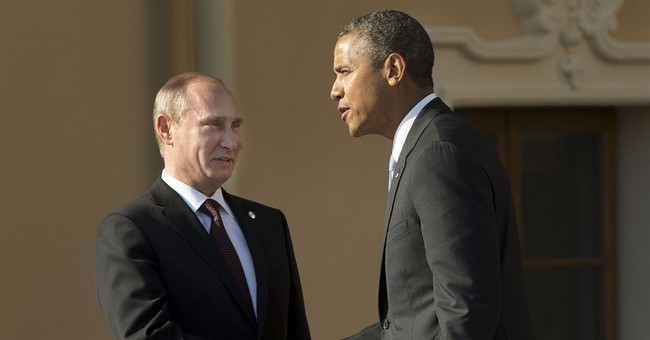 The latest Syrian crisis broke just as the children, like Congress, were returning from the long summer vacation. Our brightest (if not always the best) are redeeming all that money their parents spent on tutors to read their application essays, having been coached about how to impress college interviewers with tales of adventure walking the Great Wall of China, writing avant-garde plays in Urdu, or explaining the importance of a gluten-free diet.

The class of '17 is settling in seriously, many on posh campuses with luxurious gyms, huge playing fields and Olympic-size swimming pools. Their dorms provide places to recycle the abundant student beer bottles, to save the planet if not themselves. The college commons offers organic, vegetarian, fat-reduced fare to insure the lean and hungry look. Congress is its usual satisfied self, relieved that Vladimir Putin has relieved them of the responsibility of putting themselves on the line.

But what do our future leaders learn? Will they soak up the important clues of history and literature the present governing generation often miss? The liberal arts have been eviscerated to temper them as required courses, dumbed down not to disturb the fashionably correct. Few will be trained to analyze and criticize an argument because the stuff of poetics and rhetoric has been dropped from the curriculum. Such learning does not pave the path to Wall Street or Silicon Valley -- or to the ruling precincts of Washington.

I suggested to a young graduate of an elite school that if the latest turn of events behind the president's speech over what to do about Syria was a theater with a stage, if not a theater of war, audiences would recognize John Kerry's gaffe, inviting an improbable rescue by the (set ital) deus ex machina (end ital). He looked at me, puzzled. "Say what?" was written in his eyes.

Aristotle warned budding playwrights against using the (set ital) deus ex machina (end ital), "god in the machine," because it lacked credibility. Presidents, like playwrights, shouldn't count on such gods, either but find a better way out of a painted corner. Such a miraculous rescue, aboard a chariot like the one dispatched by the Sun God to rescue Medea from the punishment of death for killing her children, is more than a playwright can manage or a president can expect.

Vladimir Putin is no sun god, but he's Barack Obama's hero, having dispatched the chariot to rescue him from the shrinking Syrian corner he painted himself into. His predicament could only get more dire when Congress took its votes on whether to authorize missile strikes on Syrian stocks of poison gas. He was likely to lose, and his humiliation would have been without an end in sight.

The secretary of state dared the Russian leader to ride to the rescue, and the Russian leader took his dare. The White House can claim all it wants that it was Barack Obama's "toughness" that forced the favorable turn, and Vladimir Putin will smile his snake-like KGB smile and let it pass. The world knows who won this one. John Kerry, the author of the dare, learned a hard lesson: never match wits with someone as clever as yourself and maybe tougher besides. Never assume that the improbable is impossible.

The president and his friends are working hard to make Obama the improbable hero. Nancy Pelosi proclaimed the Putin rescue operation a "victory" for the American president, but Washington and the West can't afford another victory like this one. Putin, as the improbable god in the machine, is entitled to his laugh. "If Obama wants to see it like a Christmas miracle on Pennsylvania Avenue," writes Lee Smith in The Weekly Standard, "that's fine with Putin, because Putin won."

So what difference does it make whether my college graduate missed the reference to (set ital) deus ex machina (end ital)? It's but a reflection of what he didn't learn. The Greek and Roman classics no longer form the roots of a Western education to frame the common cultural knowledge. Thinking with the help of analogies and metaphors, a lost skill, testifies to the ability to reason together (though Vladimir Putin has lately done well enough with neither metaphor nor analogy).

Putting off a vote, the president is grateful to a dissembling onetime KGB agent who delayed the debate of the Syrian atrocity with a clever power play. The chief international supporter of Bashir al-Assad, and his most reliable supplier of guns, will take control now of the civil war and events in the Middle East, delaying help for the rebels who had hopes and promises of something better.

The debate that President Obama said we should have is effectively over, decided by who best exploited and manipulated John Kerry's gaffe. (set ital) Deus ex machina (end ital) indeed. Say what?