Check or Checkmate for Obama 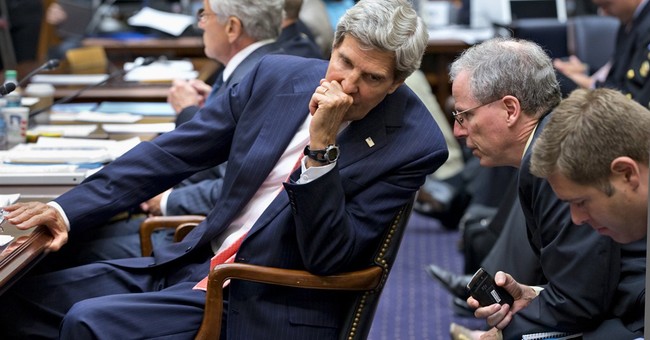 Trending
How remote the talk of war sounds. There's sound and fury aplenty but no passionate urgency in the president's call for military action against Syria. That's why most Americans are divided, with a majority leaning against going to war.

"In a world with many dangers, this menace must be confronted," the president said in his Rose Garden remarks, delivering Syria into the hands of Congress as though he were a mother explaining away a scary fairy tale to her frightened children. "Now, after careful deliberation ..." he continued, manipulating words to camouflage his own sluggish reaction to the crossing of the red line he had drawn.

For a long time, the commander in chief has acted as if he were merely moving pawns in an academic chess game against an unseen opponent. His call for bold and aggressive action against Syrian President Bashar al-Assad caught us all by surprise. (It seemed to catch him by surprise, too.) When he couldn't decide what to do next, he pleaded to share responsibility with the congressional kibitzers looking over his shoulder. Maybe they knew how to play the game.

He hardly enhanced the image of the leader of the free world when he headed for the golf course immediately asking Congress to authorize using force, a particularly frivolous follow-up to the gravity of his message. This is revealing body language writ large.

It's hard not to be cynical about the president's handling of the tangled Syrian knot, making it especially hard to focus on what's right to do now. Once so renowned for his persuasive rhetoric, he made an anemic case to Congress. The words he used seemed to be on blood thinners.

Secretary of State John Kerry, by contrast, was powerful in talking about the "moral obscenity" of killing women and children with hideous chemicals and tried to rally Congress to punish Assad for breaking a dark and deadly taboo. He sounded just the right note saying, "This is not the time for armchair isolationism. This is not the time to be spectators to slaughter."

A secretary of state is there to carry out the president's policy, but Obama has never seemed to have his heart in what he's asking us to do. "The hyperpower is going to war because Obama wandered off prompter and accidentally made a threat," writes Mark Steyn in National Review Online. "So he has to make good on it, or America will lose its credibility."

Sadly, that sounds like the way it is, and America's credibility as global leader is at stake. The special relationship with Britain has been damaged and our international friends don't trust us. Eliot Cohen, a former counselor to the State Department, even suggests that Assad used chemical warfare on his own people as a macabre moral test of those countries of the free world that take pride in their morally superior judgment, needing no American leadership.

"One has to suspect that the Syrian government deliberately used sarin in the Damascus suburbs while United Nations inspectors were in the capital and on the eve of the anniversary of Mr. Obama's red line statement," he writes in The Wall Street Journal. It was the message of a dictator imposing his will and showing his people that "no one cares about your suffering, and no one will do anything to rescue you." Hitler couldn't have implied it better.

Sen. John McCain, who lost to Obama in 2008, is now the senator with military credentials who stiffens the spine of the president, pleading with him to leave the comfort of leading from behind and lead from the front. His counsel, along with Sen. Lindsey Graham of South Carolina, is not unconditional. He demands something stronger than a shot across the bow. After meeting with the president, the two senators expressed reservations with possibilities. "We still have significant concerns," McCain said, "but we believe there is in formulation a strategy to upgrade the capabilities of the Free Syrian Army and to degrade the capabilities of Bashar Assad." There's a verbal symmetry in "upgrade" and "degrade," but can we believe Obama will actually act on them? Will he change the momentum?

Henry Kissinger insisted that statesmanship requires the ability to grasp the essential in a mass of "apparent facts," and ponder with the intuition to draw out the most plausible scenario for success. That's difficult for the best of strategic thinkers, and it's particularly elusive for a president with no taste for rising above the rhetoric of foreign policy. We can't undo his delay and dithering, but we can hope he can find the courage to play the chess game. Will it be check or checkmate?