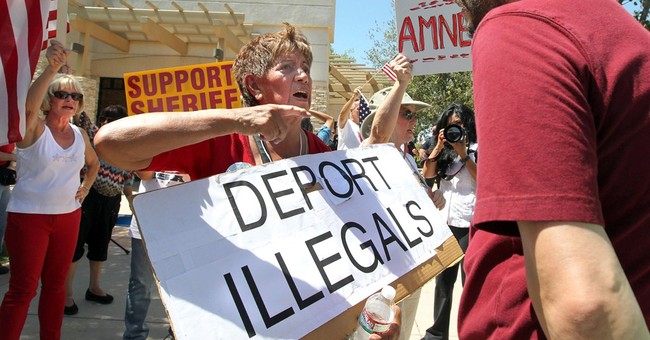 The white-hot debate over immigration is fired by anecdote, tale and even parable. The personal is always political, and when immigration is up for debate, the personal inflames every debater with pride and prejudice. At the town meetings now being called to order across the continent, congressmen are spending their recess getting an earful, peppered with pro and con about the bill presented by the Gang of Eight in the Senate and passed on to the House. The personal is everything.

Nearly everyone knows someone -- or says he does -- who has succeeded as an illegal, saved by an amnesty past and who became as fine an American citizen as thee and thou. Most of us know someone who hired a great yard worker, baby sitter or kitchen helper, and suspected he or she was illegal, but didn't ask. It was better -- or more convenient -- not to know.

Others know -- or say they do -- an ill-spoken immigrant who takes advantage of taxpayer-supported education and medical care, even if only at an emergency room. The suspicion draws on the ethnic stereotypes to find that grain of truth about the worst of the illegals.

D.A. King, an anti-immigration lobbyist from Georgia, fans the fires of contempt for Hispanics, calling them "the tribalists." His contempt grew from a confrontation with a Mexican neighbor who brought noisy immigrants to his quiet street and changed the tone of community life. He likes Rep. Steve King of Iowa, a Republican, who called illegal immigrants drug-runners racing across the border with "calves the size of cantaloupes."

Republican strategist Ann Navarro tells "Meet the Press" that she thinks, or hopes, House leaders won't let the Republicans be defined by such rhetoric: "There are other voices who are the adults in the room and who are working hard toward a reform."

On the day The New York Times splashed a story about D.A. King's colorful anti-immigration rhetoric, >i published a moving op-ed essay about a hardworking stranger from Honduras named Angel, who lives up to his name. Angel led his immigrant family of uncles and cousins, eager for work, into his neighborhood to earn respect, affection and opportunity. They were diligent and disciplined, whether weeding, working a power drill or lawn mower, cleaning gutters, painting, laying tile or hanging drywall. Their neighbors eagerly hired them, though they suspected Angel needed an immigration lawyer.

Mitt Romney prescribed "self-deportation" of illegals, but can anyone imagine lining up the buses to actually take the 11 million illegals home? How could it be done? Such a movement of men, women and children would beggar the logistics of D-Day. There are parts of the immigration bill that could get a majority in the House if the parts were selectively sorted and voted on separately in what Rep. Paul Ryan of Wisconsin calls the "step-by-step" approach." That means first allocating the money to secure the border -- actually securing it, and not just pretending it has been secured.

Bringing the illegals out of the shadows means requiring them to pay fines and back taxes and to submit to thorough background checks to get the right to go to the back of the immigration line. But this sounds as impractical as "self-deportation." If the illegals had the money to pay thousands of dollars in fines and back taxes, many of them probably wouldn't have left home in the first place or would have already gone home.

Expanding the numbers of work visas for immigrants with high-tech skills, and for agricultural workers for farmers who are finding a decline in the numbers of new workers, has significant advantages for American productivity. Offering the undocumented children of illegal aliens brought here by their parents, who bear no culpability for their illegal status, an ability to live the American dream by earning a way to citizenship is attractive to most Americans.

"We should approach this issue based on what's the right thing to do, on what's the right policy," Ryan told an interviewer on "Face the Nation." Democratic congressional leaders are heartened by news from the grass roots that House Republicans, listening to their constituents, are warming to parts of the Senate bill. This cheers the Democrats, who don't want the border made tougher because they think, with good reason, that most arriving Hispanics will, like the illegals, vote Democratic. Legalizing millions of illegals could turn Texas blue and put California permanently out of reach of Republican presidential candidates.

Americans have always been generous and eager to lend a hand to deserving newcomers, to do "the right thing." The right thing is elusive and hard to define. Coming to a consensus on "the right thing" seems all but impossible, but it's no less necessary to find that elusive "right thing," and do it, step-by-step.