Paying for the New Psychiatry 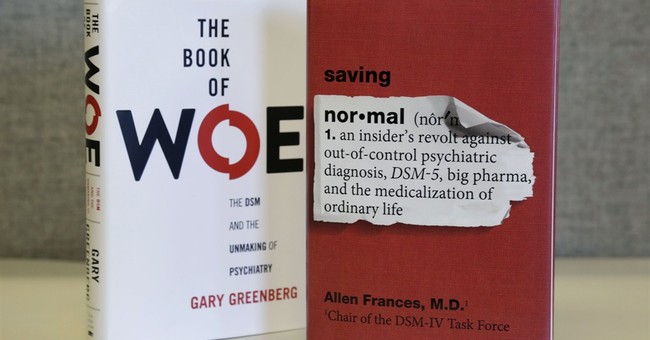 Psychiatry has always been the troubled child at the table of medical specialists. Psychiatric labels are based on deviations of "normal," which change with trends in moral and intellectual attitudes. Sometimes politics redefines abnormal into the new normal. Mental health is back at the top of public attention in the wake of shootings and uncertainty over health care, and who pays for it.

For years, the Behaviorists and the Freudians duked it out for dollars and power to control the academic discipline. But parodying humans as Pavlovian dogs salivating at the sound of a bell and depicting doctors wearing "Freudian slippers" as they lead patients to lie down on the couch are gone with the humid nights of the voodoo priests.

"Psychiatric Bible" is an oxymoron, but that's what the Diagnostic and Statistical Manual of Mental Disorders (DSM), published by the American Psychiatric Association, has come to be called. The fifth edition, or DSM-5, will be published next week, and the experts are already arguing over how many psychiatric patients can dance on the head of a pin.

It's the medical manual of diagnoses for mental disorders, and it's meant to be a treatment guide for doctors. Unfortunately, it has become required reading for insurance companies to determine what they will pay for. Rather than a guideline, it has come to be regarded as the work of gods.

Psychiatry and religion often collide, overlapping in their perceptions of what ails us, and now taxpayers and an expanding number of patients question how the diagnoses outlined in the DSM are used. The ancient sin of gluttony has become "binge eating disorder," and "self control" is eliminated as a proper mechanism to resist it. Restless children can now be diagnosed as suffering from "Attention Deficit Disorder" and given drugs that may or may not be appropriate for helping them sit still. An extra gym class might work better.

Many severe psychiatric symptoms are out of a person's control, but when there's money available from an outside source, like the U.S. government, to pay for drugs and programs, it's amazing how symptoms multiply. Discrimination disappears, and the need for careful examination evaporates when there's an insurance company ready with a "diagnostic number" for reimbursement.

This is the argument of Dr. Allen J. Frances in his new book, Saving Normal: An Insider's Revolt Against Out-of-Control Psychiatric Diagnosis, DSM-5, Big Pharma, and the Medicalization of Ordinary Life. (The book is actually longer than the title.) Frances chaired the panel that wrote DSM-IV two decades ago, and he argues that psychiatric diagnoses have come "too far, too fast" since.

The newest diagnosis is "sexual addiction." Our 42nd president wasn't a philanderer but the innocent prey of a "sickness." This addiction, however, "requires further research." Frances illustrates it with a cartoon of two women talking at the water fountain. One says to the other: "Evan has a symptom where he cheats on me and does a lot of recreational drugs, but I forget the medical name for it."

Medicalizing bad behavior, however, is no laughing matter. It can be costly to society and damaging to "patients" who are overprescribed. Childhood is on its way to becoming one big disorder, especially for boys, who are diagnosed with attention deficit hyperactivity disorder (ADHD) much more often than girls. A temper tantrum is a "disruptive mood dysregulation disorder." Matching diagnoses with specific school services such as "special learning" classrooms requires an expensive combination based on who can lobby most successfully for public funding.

What is left in their wake is quick labeling by untrained doctors who can dispense drugs. Trained psychiatric doctors doing the heavy lifting for major mental illness are often overworked, underpaid and understaffed.

The DSM should be used as a "dictionary," says Dr. Thomas Insel, the director of the National Institute of Mental Health, so that clinicians share the same descriptions of symptoms, and who understand that symptoms alone rarely indicate the best treatment. He wants to lead the institute to adopt new classifications based on research with biomedical measurable markers, including 'brain circuitry," using innovative technology. Better detection means better prevention.

That doesn't mean, as Dr. Thomas Szaz famously said, "Mental illness is a myth." But root causes are more complex than symptom descriptions. There's a big difference between the "walking wounded" and the "worried well," but you'll not learn what that is in psychiatry's bible. Reading it could bring on a disruptive mood dysregulation disorder.