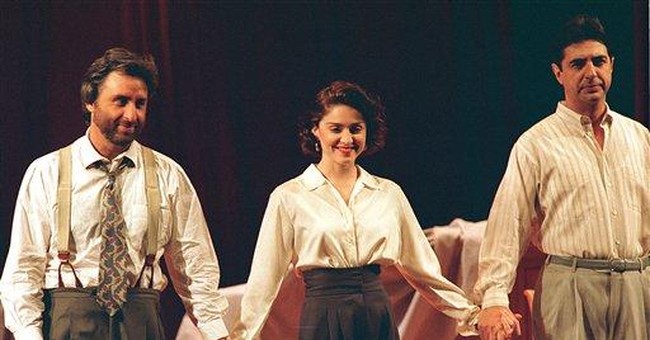 No longer, he declares, is he a "brain-dead liberal." Now he's a wide-awake conservative. Some time after arriving in Hollywood, of all places, and at age 60, he engaged in a conversation with his Republican rabbi (where did he find one?), who gave him the books of conservative writers, such as Thomas Sowell, Shelby Steele, Milton Friedman and Paul Johnson.

He had a dramatic political conversion.

Mamet re-evaluated his own heroes, starting with the playwright Bertolt Brecht, whom he now describes as "a show dog of communism," who theatrically criticized capitalism even as his royalties allowed him to live comfortably on capital deposited in a Swiss bank account. Karl Marx, he discovered, never earned his money, but mooched on Friedrich Engels' family, which may account for his ideas about how wealth should be distributed.

Mamet writes of his conversion to free market economics, his discovery of the errors of multiculturalism, in a new book titled, "The Secret Knowledge: On the Dismantling of American Culture." He sounds like a latter-day Candide marooned in postmodern America, where liberals think they have all the answers for creating the "best of all possible worlds." He renders them as absurd as Dr. Pangloss, who saw even the great Lisbon earthquake of 1755 as among "the best of all possible worlds."

"The great wickedness of Liberalism," Mamet discovered, "was that those who devise the ever-new state Utopias ... set out to bankrupt and restrict not themselves, but others."

Mamet first observes his own hypocrisy, recognizing the disconnect between how he acted and how he talked, "talking Left and living Right," which leads him to a collective indictment of himself and others in his generation of baby boomers, whose ideology has never quite been in sync with the real world they inhabit.

"As my generation did not live through the Depression, World War II and the agony of the immigrants who are our grandparents or great-grandparents; as we were raised in the greatest plenty the world has ever known and in the most just of societies," he writes, "we have grown lazy and entitled (not unlike Marx, who lived as a parasite upon Engels, and never worked a day in his life)."

In this scenario, liberals replace the Judeo-Christian roots of democracy with wishful Utopian thinking, belief in man in the abstract rather than the flawed human being he is: "We are told we need not produce, but may merely hope, we need not defend, but may hope, we must not consume, but are allowed, somehow, to hope for sustenance, magically, deriving from some unspecified actions of a government, which, all observe, is at best competent, and, more usually, self-serving and corrupt, whoever is in power."

His book comes out just as President Obama's poll numbers have collapsed into his lowest numbers yet, according to the latest measurement by The Washington Post-ABC News. By a margin of two to one, Americans say the economy is on the wrong track.

Mamet doesn't examine this finding, but his critique of the president's 2008 campaign slogans of "hope" and "change" are exposed for what they were, a triumph of advertising. "Hope is a very different exhortation than ... save, work, cooperate, sacrifice."

He compares vacuous appeals of liberal thinking to that of Mark Rudd, the leader of the radicals who seized an administration building at Columbia University during riots in the '60s. "We got a good thing going here," Rudd cried. "Now we've got to find out what it is."

The title of Mamet's book is meant as ironic -- there is no secret knowledge, except the recognition that the federal government in its expanding power is "the zoning board writ large." Mamet's new-found hero is Friedrich Hayek, who observed that man is limited and government should be, too.

Good intentions lead to unintended consequences, whether in urban renewal, affirmative action, welfare or busing. His most scathing criticism lands on liberal education, which he regards as indoctrination in identity politics, with students drugged with self-indulgence. He passionately defends patriotism, tradition, the family (rather than the diluted "family values") and the Bible.

This is a big mess of a book, spontaneous and contemplative, wild and earnest, ferociously eloquent and pugnaciously persuasive, filled with free association, dashes of hyperbole and overwrought arguments posed in angry and edgy Mametspeak. He closes with a remark by his son, offered as something calmer with the clarity of simplicity, on the difference between liberal and conservative: "Then basically, it's the difference between the heavenly dream and the God-awful reality." How true.

How the Anti-Gun Left Is Trying to Chop the Gun Industry at the Knees
Matt Vespa
Democrats Hit With Massive Ad Campaign Over Teachers Unions Colluding with the CDC
Katie Pavlich
NYC Pride Parade: We Demand No Participation from LGBT Cops, No NYPD Protection