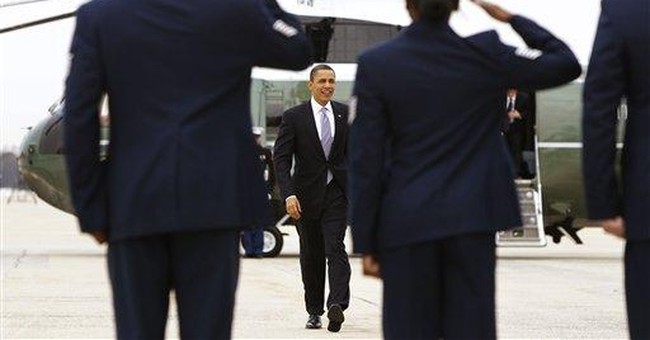 A certain Washington dinner party -- most of the guests were conservatives -- dissolved in raucous laughter the other night when the host asked me what to make of what's going on in the nation's capital. "Cynicism reigns unchallenged," I said.

My reply was hardly an outburst of wit worthy of Dorothy Parker, nor was this the Algonquin Round Table, but the guests looked at me as though I was Alice in Washingtonland who just climbed out of the rabbit hole. What I mistook for cynicism, they told me, was merely business as usual.

Didn't I know that power always trumps principle in Washington? Someone reminded me that John F. Kennedy's book, "Profiles in Courage," which captured the nation's attention and won him a Pulitzer Prize, was ghost-written and thus based on a lie of authorship. Mark Twain famously called Congress "our native criminal class." Congressmen, he observed with inventive wit, had "the smallest minds, the selfishiest souls and the cowardliest hearts that God makes."

Who can argue with the proposition that the congressional Democrats who voted for a health care reform that almost none of their constituents want and that they privately detest have found the leader they deserve? Health care is the president's piglet, and he's determined to protect it with the ferocity of a biting sow. Lyndon Johnson would understand Barack Obama's display of political persuasion. LBJ succeeded not only with knee-patting and arm-twisting, but by creating "services" requiring big bureaucracies. The Great Society was the boondoggle that first made a billion dollars an insignificant sum in congressional calculations.

But there may be a similarity between LBJ and Obama more ominous than manipulating Congress. LBJ's reputation at home turned to ashes abroad. Obama's dispatch of Hillary Clinton to display what looked like a white flag in the Middle East is likely to embolden Iran, with consequences too grim to imagine.

The debate over health care, exciting (and dispiriting) as it was (and is), diverted attention from Iranian nuclear ambitions. But it's still with us. Alan Dershowitz, the Harvard law professor, draws a stunning analogy between Iran now and Germany after World War I. He recalls in The Wall Street Journal remarks Joseph Goebbels, Hitler's master of propaganda, made to a group of German journalists in 1940: If Goebbels had been the French premier after Hitler came to power, he would have said, "The new Reich chancellor is the one who wrote 'Mein Kampf,' which says this and that. This man cannot be tolerated in our vicinity. Either he disappears or we march."

Goebbels continued: "They didn't do it. They left us alone and let us slip through the risky zone, and we were able to sail around all dangerous reefs." Comparisons of contemporary men and events to Nazi Germany are usually glib and rarely on the mark, but this one strikes into the heart of our own complacency.

Israeli Prime Minister Benjamin Netanyahu, who came to town this week to speak to the American Israel Public Affairs Committee (AIPAC), reminded Washington that the ties between the United States and Israel are not mere cliches, but reflect sharing of the hatred of the Islamists who dream of putting the entire world under Sharia law.

"Militant Islam does not hate the West because of Israel," Netanyahu said. "It hates Israel because of the West, because it sees Israel as an outpost of freedom that prevents them from overrunning the Middle East. When Israel stands against its enemies, it stands against America's enemies."

In contrast, Hillary's speech to AIPAC rang with the music of a stick banged against a tin pan. She repeated the cliches and even took note of the repeated warnings, such as they are, of transforming "crippling" sanctions into "sanctions that will bite" -- instead of sending a little dog to nip at Iranian heels, the West will send a dog big enough to reach an occasional ankle. Then the secretary of state put on her schoolmarm mantle to scold Israel once more for building apartments for Jews in East Jerusalem.

But Jerusalem, as the Israeli prime minister reminded Washington, is not a "settlement," but a nation's capital. Nearly a quarter of a million Israelis, almost half of the city's population, live in neighborhoods just beyond the 1949 armistice lines. "All these neighborhoods are within a five-minute drive from the Knesset. They are an integral and inextricable part of modern Jerusalem. Everyone knows that these neighborhoods will be part of Israel in any peace settlement. Building in them in no way precludes the possibility of a two-state solution."

The Jewish Passover season begins next week, celebrating the end of Jewish slavery in Egypt with remembrances of wandering through the desert to the promised land. It's a holiday where the herbs are both bitter and sweet, for looking back and facing the future. That's better than cynicism, however much the politicians invite it.