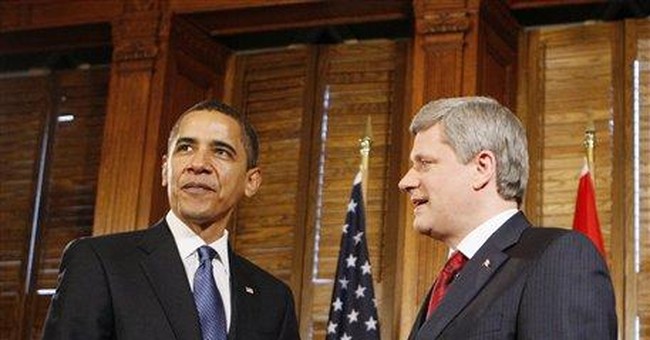 MARIGOT, St. Martin -- Barack Obama is wintering in the Caribbean. His visage adorns T-shirts everywhere on this small dot in the Leeward Islands beyond the eastern tip of Puerto Rico -- T-shirts worn by black, brown and white folk, natives and tourists alike.

The Caribbean has a rich and controversial sociology, but Americans think mostly of the islands as idyllic latitudes for winter lassitude. Few native-born islanders have made it into American history. One striking exception is Alexander Hamilton, who was born on the tiny West Indian island of Nevis and grew up in nearby St. Croix.

He's a founding father who might have been president even though he was foreign born -- "the bastard brat of a Scotch pedlar," in the derisive description of John Adams. He was considered a "citizen" of the new United States at the time of the adoption of the Constitution. But he had many political enemies. Thomas Jefferson derided him, unfairly, as a secret "monarchist." Martha Washington called her tomcat "Hamilton" to mock his scandalous sexual appetite.

Despite all that, and the vicious thrust and parry of his Republican opponents, Hamilton is nevertheless one of our most important original political thinkers, and he sounds like just what we need to lead us out of the contemporary economic crisis.

Although Hamilton's reputation suffered in the long shadow of Thomas Jefferson, liberal and conservative alike now agree that revisiting his words of wisdom would benefit us all. I packed up a small library of revisionist interpretations of the first secretary of the treasury, including Ron Chernow's wonderful biography, to read for reflection in St. Martin while back in Washington the politicians are huddling to give away taxpayer money in ways that would have surely appalled him.

Government debt, Hamilton said, was tolerable to pay for necessary wars, and debt can be run up carefully when the economy falls into trouble and expanded for the infrastructure repairs with specific "internal improvements" for the common good.

He reckoned nationalizing the Revolutionary War debt was legitimate because the states of the new federal government had incurred the costs against a common enemy and held a mutual interest in encouraging investment in an industrial economy. Whereas Jefferson saw America's future as an agrarian nation in the direction of landowners, Hamilton reckoned industrial prosperity as the key to a prosperous future.

He had no reluctance to give private banks power as long as the bankers made sure that their loans were granted to borrowers whose personal integrity was matched by smart business plans. They had to be capable of paying back the money. (No Barney Frank escapades with Fannie and Freddie allowed.) Such common sense evaporated over the past decade -- careless banking and foolish granting of loans, it seems clear now, is what led us to the present predicament. Idealism exploited by greed begot a deadly result.

Barack Obama invoked Alexander Hamilton and his economic genius at Cooper Union in New York City in a campaign stop last year. "The great task before our founders was putting into practice the ideal that government could simultaneously serve liberty and advance the common good," he said. "For Alexander Hamilton, the young secretary of the treasury, that task was bound to the vigor of the American economy. Hamilton had a strong belief in the power of the market, but he balanced that belief with a conviction that human enterprise 'may be beneficially stimulated by prudent aids and encouragement on the part of the government.'"

The key word here is "prudent," a cautious reserve absent from the recent big banking, and specifically from the president's stimulus bill. A year ago, Barack Obama as campaigner recognized that special interests had put their thumb on the scale so that government rewarded "financial manipulation instead of productivity." Subprime mortgage lending became reckless and unmonitored. Now it's a government thumb. Maybe it's necessary, and maybe it's not -- but it's a heavy thumb.