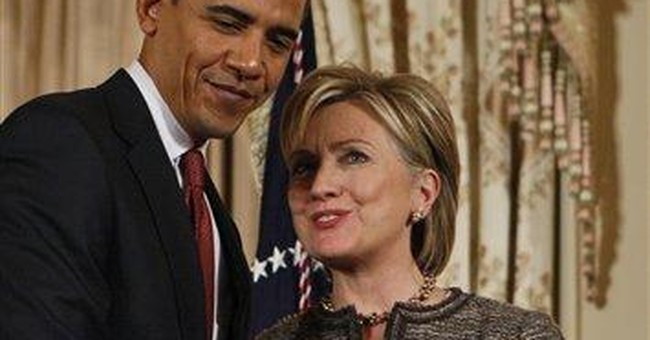 In with the new, out with the old. In with the Democrats, out with the Republicans. In with Obamaphoria, out with the relentless Bushbash. The pomp passes, the circumstance lingers on. We sat together under a tent that stretched from coast to coast, from satellite to satellite and around the globe, giving everyone who bestirred himself a front-row seat for the greatest show on earth. Inaugural 2009 filled the airwaves with guarded optimism and unbounded enthusiasm, rhetoric taking flight on the fragile wings of an attempted economic recovery and war on two fronts (at least).

The new president spoke with solemnity, reveling in the examples of the nation's heroes, asking us to rise with him above our human flaws, to share his vision for hard work, responsibility and an end to partisan bickering. The dream of the founders must live on in the land of liberty.

He reminded us that in a country where only 50 years ago his father wouldn't have been served in many whites-only restaurants he now dines on duck and pheasant as the guest of honor in a grand hall of the Capitol. It was quite a show, drawing on inspiration rather than interpretation from George Washington, Thomas Jefferson, Abraham Lincoln, Franklin D. Roosevelt, John F. Kennedy and Lyndon B. Johnson.

Elizabeth Alexander recited the poem she wrote for the inaugural, giving poetic images of the ordinary people in the crowd. We caught touching verbal glimpses of a woman and her son waiting for the bus, of a farmer checking the sky for hints of rain, of a teacher telling her children: "Take out your pencils. Begin."

She evoked images of the ordinary men and women who make our republic possible and strong, who lay the railroad tracks, build the bridges, pick the cotton and the lettuce, who sit at kitchen tables figuring out how best to "make do" when the doing grows ever more difficult. The poet's specifics are often lost in the lofty phrases of politicians: "We encounter each other in words, words spiny or smooth, whispered or declaimed; words to consider, reconsider."

As I considered and reconsidered all those smooth and spiny inaugural words and watched the crowds spread out on the Mall with their earnest, sometimes ecstatic faces, I recalled the day in 1964 when I sat with thousands of other Americans, black and white, listening to Martin Luther King Jr. tell us that "I have a dream."

On that unusually hot March afternoon, a photographer panned the crowd at the Lincoln Memorial and caught several of us with our feet in the reflecting pool, tiny figures in a throng who had no idea we were listening to history. We wound up in Look magazine illustrating the cover story. The words that day floated overhead in inspirational cadences, but some of us, many of us, were grounded in grievances, in a hurry to make the world a better place at a time when many black Americans were not allowed to vote.

Flash forward two score and five years to a cold January day where Barack Obama is sworn in as our 44th president. The crowd is bundled in heavy jackets and scarves, and no one would risk feet in the icy reflecting pool. But the new president remembers Martin Luther King: "Directly in front of us is a pool that still reflects the dream of a King, and the glory of a people who marched and bled so that their children might be judged by their character's content."

Over the weekend, I talked to a group of aspiring journalists, ages 8 to 18, covering the inauguration for Children's Pressline, an organization that teaches kids who want to be reporters to learn how to cover a big story with big questions.

"I want the policy details," says Alex Tebo, a seventh-grader from New Orleans, who adds he sharpened his questions every night at the dinner table in a debate with his parents. Alex and his young colleagues wanted to know how the new administration intended to solve the problem of delivering affordable health care, particularly for children, whether they could expect better schools and better teachers, what could be done to bequeath a future without crushing debt.

All good questions. How will Washington answer? That's the big story just now beginning to play out now, as the multitude departs the capital and the new president is left with our impossible dream.