The Sleeping Children of Israel 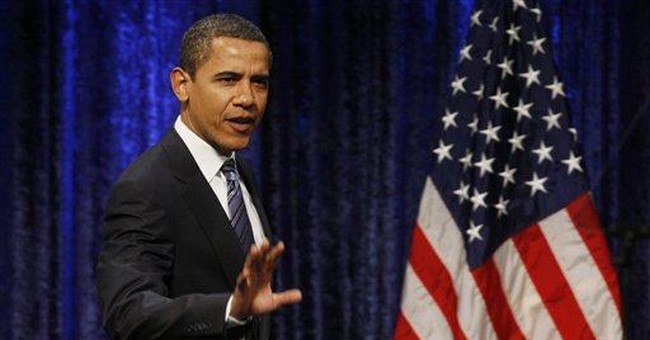 The president-elect has landed. Like Abraham Lincoln, Barack Obama on arriving in Washington headed immediately to the hotel to install his family, where they wait to move first to Blair House and then across the street to the White House. When Lincoln misplaced his bedroom slippers, Henry Willard, proprietor of the Willard Hotel, scurried to find slippers big enough to accommodate Honest Abe. So far as we know, nobody at the Hay-Adams Hotel has had to attend to Obama's cold feet.

Amidst all the speculation about the president-elect's transition priorities, it became clear this week that he puts first things first, and first was seeing that his daughters were ready for their first day in a new school. He's the daddy in chief before commander in chief, after all. Children concentrate the mind on what's up close and personal. Malia and Sasha will remember all their lives the scenes outside the windows of their hotel, watching the crowd below watching for them and observing their classmates trying to get a first look at the newest celebrities about to join them.

The Obama girls, like other girls in the West, are lucky. They could read the latest from Pakistan, where girls their age are forbidden to attend school. Taliban militants in the Swat Valley have banned education for all girls beyond the fourth grade, which disqualifies girl-children like Malia, who is already in the fifth grade. Educating girls, a mullah decreed, is "un-Islamic." While Obama tends the relationship with Pakistan and its contributions to the fight against terrorism, he'll be aware of how repressive the Islamic culture can be in the places where terrorists hide.

The world is watching America for flashes of insight into the power change in Washington, and what they see should inspire. We wrote the first chapters of our history permitting the evil of slavery, but we eliminated it at great cost of blood and bitterness, leading 150 years later to the election of a black president whose children are not relegated to segregated schools.

Historically, the transition time between the election of a president and the inauguration is one of national vulnerability, but Obama can find this interim to be an asset. It gives him time for reflection before he must make judgments about dealing with events over which he has little control. For two more weeks, knee-jerk critics can blame George W. Bush for defending Israel's right to defend itself.

We already know about Obama's commonsensical observation about Israel's right to survival, offered during the campaign. "If somebody was sending rockets into my house where my two daughters sleep at night," he told an audience in Israel in the summer, "I would do everything to stop that, and would expect Israel to do the same thing."

He has been criticized for not bringing his sentiments up to date, but silence can be useful. During the four-month interim between Lincoln's election and his taking the oath of office, he was scolded for his silence, too. But Lincoln was both intuitive and gifted in knowing when to speak and when not to speak.

"(He was) gathering the intelligence and momentum needed to arm himself for the brutal challenge awaiting him," writes Harold Holt in his book "Lincoln: President Elect." Obama frequently compares himself to Lincoln, so we can hope he's using his time to similarly reflect.

By putting himself in the shoes of an Israeli father, as Hamas hurls rockets into homes where his children are sleeping, Obama defuses the criticism of those who say Israel's defensive war is "disproportionate." When he sits in the Oval Office, he will be better prepared to mediate peace between Israel and a weakened Hamas. We weep for the children on both sides in this continuing war, but we remember that only Hamas uses children as human shields for the rocket launchers it installed in their schoolyards.

The Wall Street Journal describes Israel's invasion of Gaza as its version of the "surge," observing that "Israel, with enemies on all sides, must maintain an aura of invincibility if it is to have any chance of peaceful co-existence."

Israel's enemies are legion, and they are poised to test Obama's willingness to sit down with them without preconditions. But when he becomes President Obama, he must remember the sleeping children of Israel.

Team DeSantis Scores a Victory Against Jen Psaki
Katie Pavlich
American Medical Association Under Fire After Calling for Removal of Sex from Public Birth Certificates
Madeline Leesman
Will Biden Stick to What He Previously Said About Sexual Assault Allegations Against Cuomo?

Team DeSantis Scores a Victory Against Jen Psaki
Townhall
'Who's going to take the shot?' The RNC has come out with its own compilation video of Democrats casting doubt on the vaccine they're urging you to take
Twitchy
Yikes: Joe Biden Freaks When Reporters Ask Him if Andrew Cuomo Should Resign
Redstate
Fourth Capitol Hill Riot Police Officer Commits Suicide: Welcome to Insanity Wrap Conspiracy Central
PJ Media