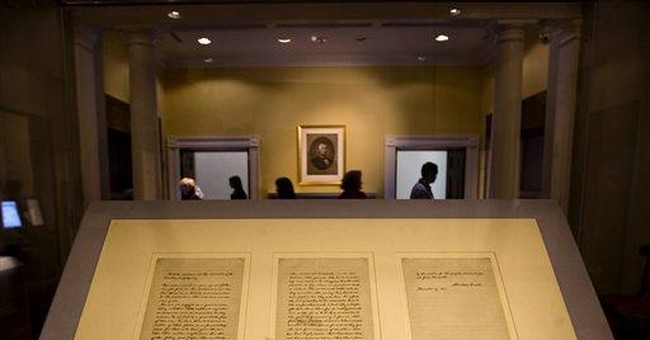 Barack Obama has been accused of hubris and arrogance for his continuing references of identification with Abraham Lincoln, who by the measure of many was the greatest of all our presidents.

"In Lincoln's rise from poverty, his ultimate mastery of language and law, his capacity to overcome personal loss and remain determined in the face of repeated defeat ... he reminded me not just of my own struggles," he told Time magazine as he set out in his quest for the White House. "He also reminded me of a larger fundamental element of American life -- the enduring beliefs that we can constantly remake ourselves to fit our larger dreams."

Hubris or not, Obama seeks a hero worthy of imitation, but the obvious similarities tell us little about what to expect. Both are lanky lawyers from Illinois, with scant legislative and no administrative experience. Both are relatively young for the White House, and both are endowed with a gift of powerful eloquence. Both came to Washington with "potential." Lincoln's biography has been filled out in thousands of books documenting his accomplishments and failures.

He may be the most written about man after Christ and Shakespeare; new books flourish with fresh information. More than one biographer points out how Lincoln was strong enough to put his enemies and antagonists in his Cabinet, welcoming challenges from strong leaders with whom he disagreed. They suggest that Obama follows in Lincoln's footsteps with the appointments of Hillary Clinton and Robert Gates. But, like Lincoln's, the mixed Obama Cabinet may show mixed results.

Both men suffered from associations with smarmy men. Southerners blamed Lincoln for the incendiary rhetoric of abolitionist John Brown, who was hanged for leading armed insurrection to free the slaves. Lincoln condemned Brown's murderous tactics but did not extend his criticism to sympathizers who advocated peaceful means to make their points. He urged mutual respect for differing opinions when it was difficult to reach middle ground.

"Jeremiah Wright was Obama's John Brown," writes historian Gary Wills in the New York Review of Books. Obama separated himself from the anti-American message of his pastor, saying his message arose from "a profoundly distorted view of this country" and failed to recognize how America had changed in providing opportunity to blacks.

Obama, like Lincoln, did not condemn those who listened to Wright for a different message. He said Wright preached a message of personal responsibility as well as hatred of America, asking the congregation to demand more from fathers, to spend more time with their children, reading to them and teaching them to accept challenges.

"Ironically, this quintessentially American -- and yes, conservative -- notion of self-help found frequent expression in Reverend Wright's sermons," Obama said in the first of two speeches about the preacher and his impact on the campaign. He called it an appeal to "the better angels of our nature," but it was the devil in the details that bit back.

Political debate in the age of the Internet has been dumbed-down into a swamp of ignorance, and Obama, like Lincoln, draws on poetic cadence to deliver a message of hope in troubled times. Pretty words can camouflage a multitude of cynicism, but we can hope that they heal our divisions: "As Lincoln said to a nation far more divided than ours: 'We are not enemies but friends. ... Though passion may have strained, it must not break our bonds of affection.'"

John McCain sounded a contrapuntal theme in his concession speech, calling for "the necessary compromises to bridge our differences and help restore our prosperity, defend our security in a dangerous world." He recalled that it was only a century ago that Theodore Roosevelt invited Booker T. Washington to dine at the White House to the outrage of many Americans (and by no means all of them in the South).

"America today is a world away from the cruel and frightful bigotry of that time," he said. "There is no better evidence of this than the election of an African-American to the presidency of the United States."

It seems fitting that the inauguration celebration takes its theme from the Gettysburg Address, with ringing words particularly precious in the age of terrorism: "that this nation shall have a new birth of freedom; and that this government of the people, by the people, for the people, shall not perish from the earth."