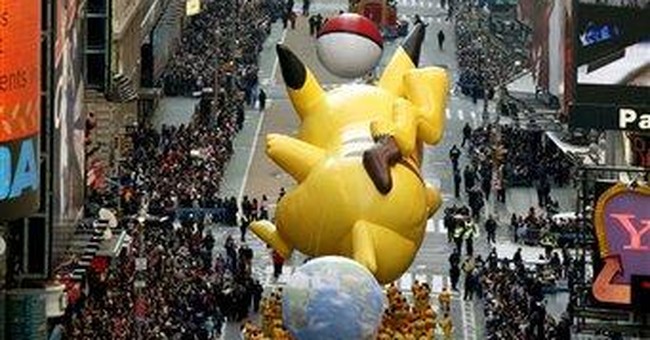 We're in transition, in more ways than one, and we hold fast to our most traditional holiday season. For all of the recent books celebrating atheism, we still gathered together this week to ask the Lord's blessing: "He hastens and chastens, His will to make known."

Thanksgiving is uniquely American. More than any other holiday, it builds on history, from a time before we began building our nation. When pilgrims and settlers set forth for the New World, they were inspired and motivated by hopes and dreams, some material and many spiritual. Some of them fantasized that they could establish a new Eden, where the descendents of Adam and Eve would no longer be tempted by Satan to do ill to others. But human temptations are always great. Theirs was a hardscrabble life, where the battles between good and evil persisted. Families depended on one another -- and on the Native Americans -- to help.

Since then, the history books have alternated interpretations that emphasized the virtues and then the vices of our forefathers. In the span of our own lives, Christopher Columbus and others who blazed trails across the continent have been demoted from their mythic portraits of courageous ambition to caricatures of rapacious exploiters of land and people.

Both descriptions are part of our story. The country grew with a mix of decency and destruction, sacrifice and suffering. The tree of knowledge had many branches from which to pluck the tempting fruit. What's important to remember during the Thanksgiving holiday is that the founding fathers of an imperfect vision of "a more perfect union" planted the seeds for achieving that union.

As different generations gather during these days of feasting and animated conversations, we scan memories of family at earlier Thanksgivings to further enjoy Thanksgiving present. The old fogies among us recall other transition times when a new president arrived amidst great optimism. My own father and mother sometimes showed the youngsters a photograph of themselves in tuxedo and formal gown taken at one of John F. Kennedy's inaugural balls. Washington was besotted with excitement over Camelot. War and controversy marked the inaugurals of Lyndon Johnson, Richard Nixon and Jimmy Carter, who came to town as Republicans and Democrats were riven into warring camps. Nearly always, the greatest differences of opinion were between the younger adults and the older ones.

What makes this season different is the optimism and pride taken by the younger generation in the election of a black man to lead America. It's warming to hear the young express admiration for their country. This is "change," sure enough.

As we confront financial meltdown at home and challenge across the seas, the debate between the generations, even between liberal and conservative, is muted, if only a bit. Conservatives know their man was defeated, and not just in a squeaker, and it behooves them to take a little humble pie along with the pumpkin. (Liberals might ponder the possibility that next year the humble pie might be for them.)

Subject No. 1 is Hillary Clinton, again. (Has there been a Thanksgiving season since the campaign of '92 that she didn't dominate argument and indigestion?) The former first lady of the failed health care plan has had more reincarnations than Shirley MacLaine. Now she's tipped to be secretary of state.

It won't be a first, but it's not a bad consolation prize for the woman who would have been president. In this season, even the "Hillary haters" have mellowed. Given the givens, she's a happier choice than John Kerry or Chuck Hagel. She's not Joe Lieberman, who might have been John McCain's choice. She has wiped from her mouth, if not from our memory, her infamous kiss of Suha Arafat after Yassir's missus accused Israel of spraying poison gas on Palestinian women and children.

Hillary learns from her mistakes. She sounds like she would be a tougher diplomat than Barack Obama, and her once-strident feminist rhetoric has softened. A secretary of state doesn't deal in the social issues, anyway. Bill still hovers large, but she can tell him there's no space on her plane when she travels the world. We can hope.

Anyone who reads the headlines is abundantly aware that these are perilous times; we all wish the new administration well. We should remember, with faith in divine guidance, the admonition of George Washington when he declared the first Thanksgiving holiday in 1789. He asked one and all to "render our national government a blessing to all people, by constantly being a government of wise, just and constitutional laws, discreetly and faithfully executed and obeyed."