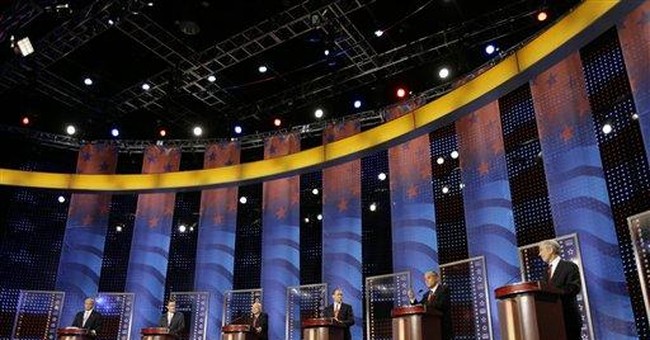 Bickering, not debating, is what modern politicians do best. Consider the Thursday night Republican debate in South Carolina. Fred Thompson accused Mike Huckabee of threatening the Reagan coalition. Did not, the governor retorted. Mitt Romney accused John McCain of not feeling the pain of laid-off Michigan autoworkers. Did too, the senator replied. Rudy Giuliani does too appreciate the surge in Iraq as much as anyone else. Is this a debate, or a grade-school shouting match?

The Democrats aren't such serious grown-ups, either. Hillary Clinton, campaigning in Nevada, suggested the debate over immigration is about sex, not law and demographics. "No woman is illegal," she told a group of Hispanic voters. (Men may still be illegal.) Barack Obama turned to losers past to shore up his campaign, gushing over an endorsement by John Kerry.

But it's the Republicans who are wrestling with an identity crisis. Mike Huckabee, the surprise of the campaign, took considerable fire in the Thursday-night debate, forced into a defense of raising taxes over his 12 years as governor of Arkansas. "What I did was," he said, "I governed." To many Republican ears, that sounds too much like a liberal Democrat making excuses.

But what, exactly, is a "liberal" and a "conservative"? Who's "true" and who's not? Different definitions proliferate at different times. Definitions can be misleading because, as Mark Twain observed, "all generalizations are false, including this one." Russell Kirk, one of the founding fathers of modern American conservatism, always said he was conservative because he was a liberal, with no fixed ideology but a strong sense of right and wrong. Those are almost fightin' words in a saloon-like brawl.

David Frum, a former speechwriter for George W. Bush, argues in his new book, "Comeback: Conservatism That Can Win Again," that the big conservative ideas of the '80s have done their job and are no longer relevant. He insists that Reagan-style tax-cutting and deregulation are for the birds flying backwards. Mantras against taxes and guns, and promises to restore traditional values, he argues, will drive away the rising generation. He prescribes federal policies to encourage larger families, hence more taxpayers, and a greener conservatism, including a carbon tax that he calls a consumption tax. "Republicans treat the coal industry with the same protective reverence the Democrats grant to their school-destroying allies in the teachers' unions," he says. This sounds to a lot of Republicans like a Democratic platform, but he scolds Democrats for their trade protectionism, state-run social welfare programs and a foreign policy that treats the United Nations as the font of international legitimacy. Democrats should understand that stuff like that won't work any better now than it did the last time.

The struggle between the parties, between the competing ideologies, is always a struggle over who controls the language. Those who control the definitions of words control the debate. In a New Criterion symposium over the future of conservatism, Roger Kimball observes that conservatives have scored points by defining affirmative action as "discrimination according to race or sex," that taxation is "government-mandated income distribution." That's why conservatives have been winning.

Liberal reforms often exacerbate the problem, running afoul of the law of unintended consequences; think welfare without strings. Welfare without strings mostly resulted in a lot of single mothers and a lot of children without fathers. The conservatives prescribed a more reflective, more prudent approach, and won the argument when Bill Clinton signed welfare reform legislation that was arguably his most important accomplishment.

The greatest difference between conservatives and liberals, a difference yet to be effectively aired out in the young presidential campaign, are attitudes toward foreign policy and national security. Asked to name their top foreign-policy concerns, conservatives invariably say, "destroying al-Qaida." Liberals almost unanimously say withdrawing from Iraq trumps everything else. Only the surge, and the improving situation in Iraq that is now clear to nearly everybody, blunted the liberal attempt to make national security the overwhelming issue of the day.

The mangled early conduct of the war in Iraq cost Republicans their historical advantage with the national security issue and made it difficult for George W. Bush to get due credit for the fact that we've gone six years without a major terrorist attack on American soil. The president can take a bit of consolation that the good news from Iraq is making the election in November about who would make the best commander in chief. Now that the surge in Iraq is working, the most important issue for voters in November should be about who would make the best commander in chief. That beats endless bickering. Somebody should tell the candidates.