Still Searching for the Beef 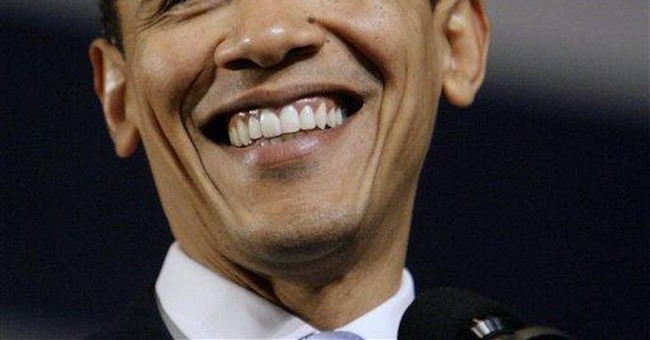 Hillary escapes the pillory. The Obama drama heads for an uncertain second act. John Who? Mac's back. Mitt's bruised, but fit. Mike's still in the fight. Is this a great country, or what?

George Washington didn't want a party system, thinking political parties, like the Democrats and Republicans, would contribute to "mischiefs of spirit" and agitate the community with "ill-founded jealousies and false alarms," kindling "the animosity of one part against another." Well, George was not only a great general, but also a wise prophet. But political parties also provide grist for argument and debate that falls between the polarities of ideology, forcing discrimination. Sometimes the candidates even say something real.

For a week before the New Hampshire primary, we heard an endless variety of simple recipes for resolving complicated issues. Something called "change" was prescribed as the chicken soup that would cure everything. We might have been voting for the chef-in-chief. "Change" was offered hard-boiled, deep-fried and marinated for grilling. If Walter Mondale were running this year, he would still be searching for the beef in the stew.

Not so long ago, "change" was a negative applied to Hillary Clinton. As first lady, she was accused of changing her hairstyle as often as she changed her shoes, which suggested she couldn't make up her mind about the little things in life. Wasn't that just like a woman? Vanity, vanity, all is vanity. For a while in this campaign, she was accused of not changing enough, of hanging tough, of sticking to her guns, of withholding emotion. (Wasn't that just like a man?)

"Gender is probably the most restricting force in American life, whether the question is who must be in the kitchen or who could be in the White House," wrote Gloria Steinem in the New York Times the day before the New Hampshire primaries. Hillary, in the feminist formulation, had it tougher than Obama and had to guard against showing too much female "difference." Ms. Steinem, like the rest of the pundits, consultants, pollsters and wise men, was wrong.

The turning point may very well have occurred when Hillary's eyes welled in response to a question about how difficult it must be for her to get out of the house in the morning, knowing the day would bring another assault by all those men. "I couldn't do it if I didn't just passionately believe it was the right thing to do," she said. "This is very personal for me." Skeptics thought they saw an onion up her sleeve, but she never actually produced a tear. Planned or not, the incident was a reversal of Ed Muskie's tears in New Hampshire in 1972. He said the tears were snowflakes, but whatever they were it scuttled his presidential ambitions. Maybe men and women really are different.

Hillary's questioner was more than satisfied with her response. She told reporters later that the show of emotion told her, and apparently lots of other women, that "she really loves us and wants us to succeed in the world. I think she's real now, there's a person there." But she voted for Obama anyway. How's that for change?

"Change," however, is merely a word and one filled with ambiguities, allowing everyone to see whatever they want to see in it. But as the candidates move to Michigan, South Carolina and beyond, we're entitled to know how the candidates define the word, which after all has meaning. Shakespeare's Falstaff characterized "honor" with rationalizations and calculations in self-defense: "Can honor set to a leg? No. Or an arm? No. Or take away the grief of a wound? No. Honor hath no skill in surgery then? No. What is honor? A word. What is in that word honor? What is that honor? Air."

Change, like honor, breathes air fresh or foul, to work for public good or public ill, to support personal ambition or community aspiration. That's why the tightening of the candidates' race can be for good. We can scrutinize more carefully what "change" means in the mouths of these worthies who want to sit in the seat of the mightiest. Looking to the Bard again: We know who they are, but know not what they may be.