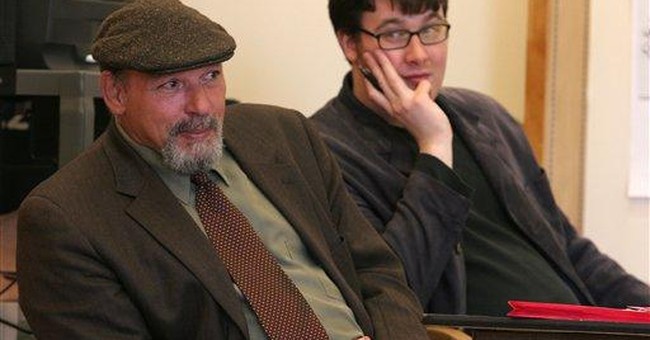 College just ain't what it used to be. The evidence lies all around. If you're a baby boomer you're going to feel old, very old.

Nicholas Handler, a Yale junior and the winner of an essay contest by the Sunday Magazine of The New York Times, says the contemporary college generation is "post-everything, post-cold war, post-industrial, post-baby boom, post 9/11." He even subscribes to literary critic Frederic Jameson's description of the young as "post-literate." Instead of rebels without a cause, their cause is rebelling against their parents' generation by pointedly not rebelling. The students who protest just to imagine how their parents might have felt are reduced to wearing their parents' old Che Guevara T-shirts.

But the fault, dear Brutus, may not lie with those parents, but the generation's professors, writes Frankie Thomas, a junior at the University of Southern California and a runner-up in the contest. "They made us buy and read $100 textbooks that they had written themselves," she writes. "Their lectures were word-for-word recitations of these very books. And it was excruciatingly clear, from the way they spoke, that these may have been the only books they had ever read." Such are the luxuries of academic tenure.

To many students, it makes little difference what their teachers have to say, because they don't listen. They have more interesting things to do, text messaging, video games, watching boring stuff on YouTube and socializing on Facebook. When a cell phone rings on the front row the professor usually doesn't care; his is likely to ring, too. (Rudy Giuliani would approve.) If the students of the 1960s had enjoyed these high-tech gadgets and contrivances or even better television, Thomas suggests, they might have been too busy to protest something as irrelevant as a war in Vietnam.

Travis Weinger, a senior at the University of California at San Diego, sees what separates his generation from parents and professors through a different lens. "The Cold War is over," he says. "Capitalism won. Our generation has grown up always knowing the futility and barbarity of Marxist-Leninism, Maoism and all their various spawns." Mao's Little Red Book reads like satire (just as it did, to be sure, to a lot of students even then).

He understands the way the market economy runs as well as the reason Marxist intellectuals can't find work outside ivy-cloistered walls: "It is a sign of college evolving beyond its petulant, radical, '60s phase and maturing into a place where hard work and valuable skills and knowledge are rewarded." That's arguably a sign of maturity for parents and students.

Changes on campus remind us all that change happens everywhere. Most of us don't expect the old neighborhood or the old college campus or even our parents to change, but they do. A lot of boomers who liked the revolutions they used to blow up society when they were young are considerably less keen to have their children and grandchildren blow up everything now.

Elizabeth Samet is a professor at West Point who teaches poetry to the cadets being trained to run the engines of war. She says poetry helps them think through the answers to questions hidden deep in the consciousness. This is particularly interesting because poetry has come on hard times on campuses, despite the folk wisdom that recitation of disciplined language, like the sound of music, illuminates both the romance of the struggle and the grim reality of the battlefield.

Samet feeds the imagination of her students with fresh words for understanding the verities of military life. The cadets, for one example, can be transported into the mind of Thomas Hardy, who wrote the poem "Man He Killed." A soldier, facing an enemy he has just shot, contemplates how in other circumstances he might have stood that same fellow to a convivial drink.

Death in battle is never far from the minds of cadets, even in training. Poetry offers sound and sight to offer sustenance. Fine literature enables them to ask crucial questions when they go to war, as many of them will, and how to compare themselves to the heroes of Homer's Iliad or to the cynics of Tolstoy's "War and Peace."

Writes Samet: "They know their lives may contain a share of necessary violence, but, at their best, they have the courage to meet brutality with imagination as well as ammunition to engage ambiguity rather than running away from it." That's still the point of a college education, even when we forget.