A Mirror to Ourselves 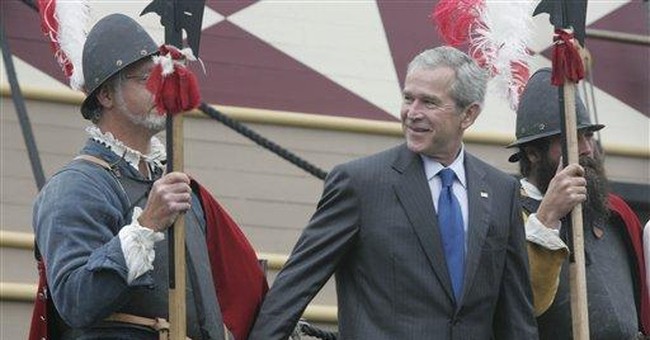 JAMESTOWN, Va. -- Jamestown is not Disneyland, but a brief visit to this early settlement in America can inspire the young (and the old) and makes a wonderful transition from vacation to school. Jamestown abounds in tales of romance, rapacity, courage and determination hard to fathom today. It's in a beautiful natural setting on a bend in the James River. (If you want to be taken for a native, pronounce it "Jeems.") The settlers of Jamestown had no leisure to celebrate a holiday called Labor Day; every day required hard, long labor. Out of their labor American democracy grew.

Jamestown has none of the patriotic mythology of Plymouth Rock, although it was the first permanent English settlement in North America, established 13 years before the Mayflower Compact. Our forbears arrived on three small ships, the Susan Constant, the Godspeed and the Discovery. Virginians, with a twinkle in their eye, point out that the New England pilgrims were actually looking for Virginia and ended in Plymouth by mistake: They missed the highway signs. Jamestown settlers had no great thanksgiving feast because the Indians were not particularly friendly and the Englishmen were starving soon after they arrived. They came in search of gold and spent most of their time searching for something to eat.

Karen Kupperman, a scholar of Jamestown, summed it up at a Washington symposium earlier this year celebrating the 400th anniversary of the establishment of the first colony: "Jamestown is the creation story from hell." Indeed. The history is a devil's brew boiling with good and evil, opportunism and heroism, barbarism and slavery.

But an understanding of Jamestown better captures the complexities inherent in our founding than the experience of the pilgrims of New England, who get considerably more space in the history books. "You can't airbrush out the tragic consequences of colonization," says James Horn, author of "A Land as God Made It: Jamestown and the Birth of America." He shows the brutality and the perseverance, the toughness it took to overcome human nature and the nature of beasts and vegetation at the mercy of a climate that dictated a hardscrabble life. "But Jamestown," he writes, "provides us with a mirror. If we don't understand our history, we can't understand ourselves."

Ambitious college freshmen who want to learn something could spend a little time at Jamestown on their spring breaks. The 10th annual Beloit College Mindset List reminds us that the Class of '11 hasn't lived through epochal history, such as the fall of the Berlin Wall or the end of the Cold War. Cultural touchstones, of course, change with each new college class, but with the knowledge of contemporary history diminishing an understanding of our origins becomes more difficult. At Jamestown there's even a memorial to the Magna Carta, a celebration of the roots of Anglo-Saxon common law. Does anyone memorize the date 1215 anymore?

Full disclosure: I couldn't interest my two redheaded grandsons, 8 and 11, in Captain John Smith until they discovered that he had a red beard. But as a hero he cut a fascinating figure. If only half the stories about him are true, he was one tough critter, a rebel with a cause, to save Jamestown from extinction by ordering everyone to work if he wanted to survive. "He that will not work, shall not eat," he said. He was captured by the Powhatan Indians and according to legend was saved from execution by Pocahontas, one of the many daughters of the chief. Peggy Lee sang about their "mad affair" in her hit "Fever," but that's probably myth. The actual story is that Pocahontas grew up to marry John Rolfe, a colonist who established a popular strain of tobacco in Jamestown, the first big money-making crop of the founding community. Husband and wife took their young son to London for a publicity tour to raise money for further investments in their fledgling colony.

When President Bush spoke at the celebration commemorating the 400th anniversary of Jamestown in May, he conceded the flaws of the settlers, but reminded the gathering, including Queen Elizabeth II, that the drive for liberty demands sustained courage in the face of discouraging setbacks. "Yet we can have confidence in the outcome," he said, drawing an analogy with the war in Iraq, "because we've seen freedom's power to transform societies before."

Sandra Day O'Connor, the Supreme Court justice now retired, spoke with greater subtlety. "The settlers of Jamestown underwent severe testing," she said. "Yet Jamestown endured and gave America, if not a perfect start, certainly a legacy of self-reliance sufficient to build upon and establish a system of citizen participation in government." Hear, hear. And enjoy the leisure of this Labor Day. There's a lot of work ahead of us before the next one.