The Facebooking of America 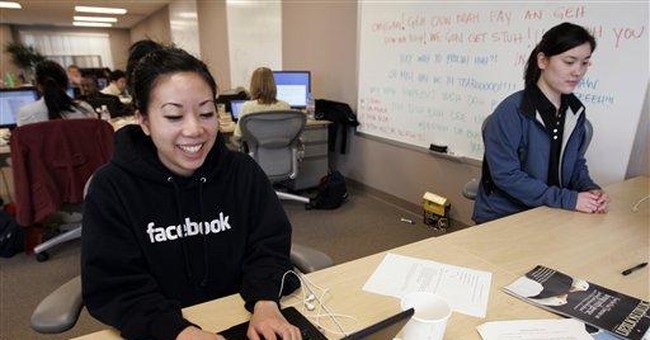 Every generation is sure that its social and cultural trends are here to stay. When history moved slowly before the dawn of the electronic media, it might have seemed so. But with instant communication through cell phones, fax machines, e-mail and Internet meeting places, such as Facebook and YouTube, cultural trends accelerate dramatically. The future as imagined by Generations X, Y or Z is easily blown away by the high velocity winds of change.

Nearly forty years ago this week, more than a half-million young men and women, giddy with their liberated hedonism, descended on an alfalfa field in Woodstock, N.Y., and proclaimed the new consciousness, delivered through drugs, music, sex and unreal optimism. The next year, Charles Reich, a professor at Yale Law School (who should have known better), published "The Greening of America," a best-selling book that foretold of the newest revolution in human affairs, a transcendent form of reasoning heralded by these youthful prophets. He called it Consciousness III.

Consciousness I in his scenario was based on self-interest, competitiveness, suspicion and the perception of the world as "a rat race with no rewards to losers." Consciousness II elevated the "Organization Man," powerless unless he conformed to something larger than himself, and required to pay homage to the prime values of science, technology and organizational planning as ways to triumph over nature, collectively and without individual responsibility.

Consciousness III was born in the alfalfa field, weaned on the naivete of the '60s. It was what could be called "peace(nik) in our time." If the older generation saw problems of work, injustice and war as the inevitable frustrations of the human condition, the Woodstock generation tasted love and liberation in the new Eden and admired their flowering power through the eyes of the sensitive adolescent. These permanent children identified with Holden Caulfield, the fictional character of J.D. Salinger in "The Catcher in the Rye." Professor Reich called him the prototypical hip hero. The despised grown-up world was populated only by old fogie phonies.

To escape his own adulthood, the professor strolled the Yale campus barefooted in bell bottoms emblematic of his liberation: "They give the ankles a special freedom, as if to invite dancing right on the street."

Anyone not hallucinating would have questioned this silly thesis within three months of Woodstock. Another free rock concert, this one in Altamont, Calif., "Woodstock West," descended into blood with a soundtrack. Dozens were injured and one man was fatally stabbed just below the Rolling Stones performing on stage. So much for drugs, sex and loud music as the route to peace and love.

Max Yasgur, the dairy farmer who lent his Woodstock farm for the event, is long dead, and his property is for sale for $8 million. Sens. Hillary Clinton and Charles Schumer have earmarked $1 million of your money for the Museum of Bethel Woods, dedicated to "interpreting" the 1969 Woodstock Music Festival experience. At least 176 trademarks have been granted by the U.S. Patent and Trademark Office to exploit the word "Woodstock" to sell clothing, shoes, coffee and other things. These trademarks are meant to appeal to aging hippies who push "peace and love" like granola and trail mix. This can seem terribly quaint to Generations X, Y and Z, whose compatriots are considerably more interested in tuning in online than tuning out on drugs.

The boomers who never trusted anyone over 30 are now over 60 themselves, struggling to understand the world of their children and grandchildren. Permissiveness has turned into perplexity in confronting "The Facebook Generation." Economist Arnold Kling, writing on TechCentralStation.com, asked one young man if he thinks the creators of Facebook, "primarily a flirt zone for young people," should try to reach out to those of the older generation or wait for them to die off. Replied the young man, cheerfully: "Wait for you to die off."

That may not be the last word; there's a new Generation Gap, as there always will be. How many parents of the Woodstock generation have asked their 12-year-olds to help them with the technology of the Internet, or to program a cell phone or help with a DVD? Cell phone manufacturers, in fact, are targeting a new demographic, called seniors. Samsung's Jitterbug has big numbers, is easy to read and only makes calls without text messaging. No camera, no Web browser, no screen to play movies. Less can be a lot more.

No one, so far as I know, is at work writing "The Facebooking of America," but the favorite flavor of Generations X, Y and Z will follow Consciousness III to the Island of Depleted Trends. It's the one sure bet.