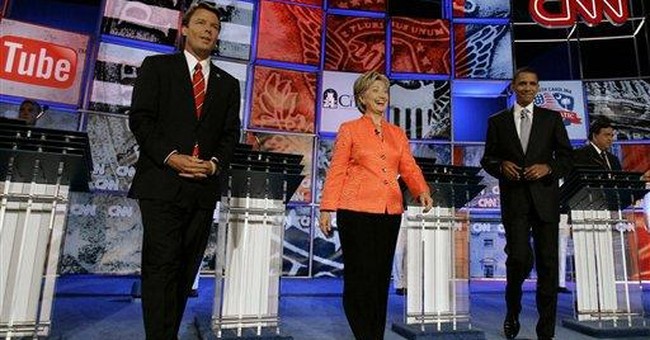 So many debates, so much time. The Democratic candidates complain of debate strain (or their staffs do, anonymously). Too many candidates, too little to say. The debates, a leading Republican non-candidate insists, are good reasons not to run for president.

"The presidential nominating process in its current format is insane," says Newt Gingrich, who likes to talk (and talk and talk). He describes the debates as "auditions" that diminish the seriousness of the candidates, elevating (if that's the word for it) only the status of the interviewers. The debates are the political version of game shows -- think "The Bachelor," or "American Idol," and "Are You Smarter Than a Fifth Grader?" If Jack Abramoff were not making license plates, he could moderate "The Price Is Right."

Newt Gingrich, freed from the restraints of public office or the quest for one, can be a stitch, making fun of both Republicans and Democrats, needling "the latest exciting Republican name" as a man "who has to leave TV to get on TV." (Guess who?) The former speaker of the House, despite being a "former," is a popular power-breakfast guest, and Bob Tyrrell, editor of The American Spectator magazine, invited Newt to serve the salt and pepper with the bagels and fruit the other morning to a few pundits eager to get up from their beds at dawn.

"Once upon a time I thought I should run because it would be interesting, and senior Republicans thought I would enrich the debate," he said. "Well, has any candidate enriched the race or made it interesting? Or gotten anyone to say, 'I can't wait 'til the next debate'?" He clocked one of the debates and found that each candidate got a total of 7 minutes and 20 seconds. Neither Newt nor any other pol could clear his throat in twice that, and when Sean Hannity and Alan Colmes interviewed him on Fox he got 20 minutes -- with a larger audience.

"Why should I join the pygmies, shrink to the level of 30-second answers, standing like a trained seal waiting for someone to throw me a fish?" he asks. But he won't say he couldn't develop an appetite for fish. If he doesn't see "a conservative candidate" emerge who he reckons can win, he's willing -- eager, even -- to be tempted. He thinks there's time to wait until Sept. 27 to decide, when the results are in from a nationwide "workshop" supplying talking points if not actual answers to crucial questions about health care, jobs, energy, the environment, education and immigration.

In Newt's view, nobody else has either questions or answers. Democrats can't give up their rote contempt for the free market that makes everything possible for most Americans. They're willing to cook the golden goose to stuff themselves one last time. The Republicans are technically incompetent and dysfunctional, like a business that can't recognize its market and enrages the customers of its market share. This encourages Democrats to say goofy things.

Worse, when the politicians are incompetent, it logically follows that the government they fashion will be incompetent, and the public reaction is usually not to fix it but to let the politicians make the government bigger. That's why almost no Republican looks to next year with anticipation. The Republicans, Newt says, could win if they run against what he calls "the Oprah ticket" -- Hillary and Obama. But Bill (and Hillary) Clinton, it occurs to me, did not get to the pinnacle of politics by making dumb choices.

For all his put-downs and put-ons, the former speaker sounds best in the heat and light of his moment at the podium. Follow-through is not always the mark of the successful campaigner. His stunning triumph with the "Contract with America" in 1994 turned swiftly to ashes. Now he's pushing a 21st-century "Contract with America," requiring not only a change in government policy, but a change in public attitudes. The debate stuck in red vs. blue has to become what he calls "the red, white and blue."

He brandishes a handout of polling data, available to candidates of either partisan stripe, emphasizing that 80 percent of Americans agree there's a desperate need to strengthen and revitalize the nation's core values. Like the college professor he was and is once more, Newt insists this means restoring pride in being an American, teaching what American citizenship and American history actually mean. "First you win the argument," he says, quoting Maggie Thatcher, "and then you win the vote." But the devil, as they say, is in the details. We have few details and lots of devils. The former speaker is eager to tell you who they are.