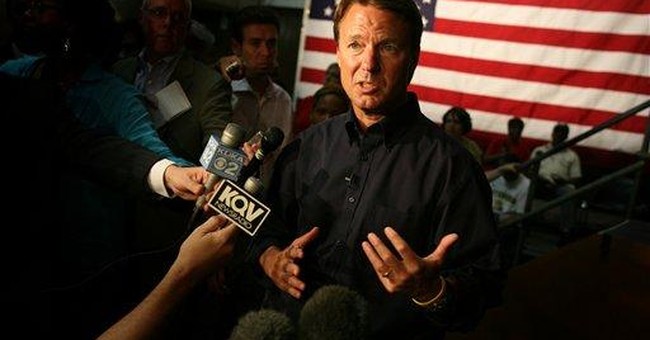 John Edwards has finished his celebrated poverty tour, making obligatory stops in hurricane-ravaged neighborhoods in New Orleans, decrepit Delta towns in Mississippi and Arkansas, up through Appalachian backwaters and finally home to Washington.

Now he ought to sit down for a good read with "The Forgotten Man," a new book by the economist Amity Shlaes. She shows how he's looking through the wrong end of his binoculars, emphasizing poverty and not the prosperity expanding the economy that lifts the poor. The public seems to understand what he doesn't. He has to bring up his poverty program because no one else will.

Mr. Edwards has forgotten "The Forgotten Man." Franklin D. Roosevelt first used the forgotten man in a speech in 1932, when he applied it to the poor man, the old man, the sick man and the man at the bottom of the economic pyramid. That forgotten man needed government help. In another earlier version, the term applies to well-meaning social "progressives," whose economic analyses ignore the man who bears the heaviest burden for paying for all the do-good programs. The forgotten man is the tax-paying working stiff. Joe Sixpack, as we called him a generation ago.

"The Forgotten Man" is coerced through taxes to pay for dubious social programs. He's the little guy who forever works, usually votes, sometimes prays, "but always pays." Like Roosevelt, John Edwards can't understand how the rich and prosperous are crucial to helping the poor. He wants to raise taxes on the rich even when it inhibits economic growth. Like Roosevelt, he doesn't understand how rigid laws dictating or encouraging higher wages won't reduce unemployment.

The Edwards emphasis on poverty (like Lyndon Johnson's infamous "war on poverty") is likely to end in ashes. Dennis Goldford, professor of political science at Drake University in Des Moines, Iowa, observed in The New York Times that people who vote don't think of themselves as poor, and are unlikely to identify with his message. "Even if they may be poor, many of them don't think that they are."

Amity Shlaes brings a new evaluation of Franklin Roosevelt's response to the Great Depression, with lessons for our times. FDR needed a foil, and he elected the businessman. His rhetoric was sharp and persuasive. In saying that "the only thing we have to fear is fear itself," Shlaes told a buffet luncheon the other day at the Americans for Tax Reform, FDR was clever, charming and original, "but he scared businessmen away from investments and innovation and frightened them into inaction." He turned the government into competition the private sector could not match. Fear froze the private economy. What often gets lost in the mythologies of the New Deal is that it was World War II, not the New Deal, that ended the Depression; the Dow-Jones Average did not rise to pre-Depression levels for at least a decade after FDR died in the early spring of 1945.

The president changed the meaning of words, too. Before FDR assumed office in 1933, the word "liberal" identified someone who championed the rights of the individual. FDR changed "liberal" to mean someone who champions rights and advantages of groups. The individual wouldn't any longer count for very much. Republicans, to be sure, had long practiced interest-group politics on behalf of business, but Roosevelt raised group rights to an art, creating constituencies of labor unions, senior citizens, teachers, farmers and others. The election year 1936 saw a landslide for FDR and the first time short of war that federal spending outpaced the spending of the towns and states. All those political constituencies showed their appreciation with votes for Roosevelt. Said his aide Harry Hopkins: "Tax and tax, spend and spend, elect and elect."

"It can even be argued," says Shlaes, "that one year -- 1936 -- created the modern entitlement challenge that so bedevils both parties today." The year 2007 is nothing like 1936, but the attitudes that polarized the country then are with us still, occasionally exacerbated by ambitious politicians like John Edwards and his reprise of class-warfare rhetoric.

I grew up in a New Deal family, with a photograph of FDR on our living room wall. I understood his appeal, which we imagined could never be successfully challenged. His "fireside chats" reassured us all. Evaluating the economics was not something for a child to worry about, and the trust that the nation reposed in FDR was often little more than child-like.

Amity Shlaes says she wrote "The Forgotten Man" to remind young people that such child-like faith is for children, that young and old must understand that lavish government programs cost money, and they will pay for them no matter how the bill for them is disguised. Otherwise, theirs, too, will become a generation of the forgotten men.