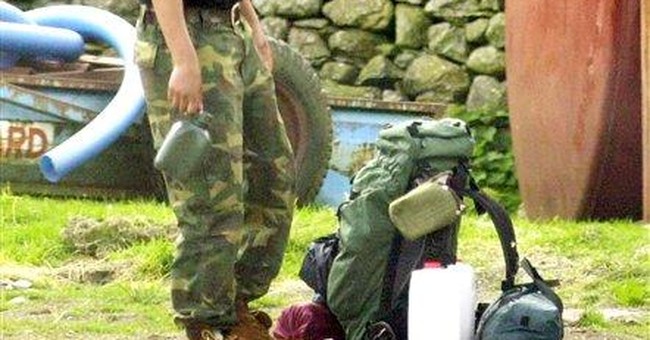 Nothing about the recent terrorist plots gone awry in England and Scotland has surprised -- and saddened -- the public quite like the fact that the villains were doctors. Every society awards special value to those who promise to dedicate their lives to healing others. We think of them as doing God's work. Lawyers (like pundits) have rarely enjoyed such prestige.

Even when healing was based more on unproven ideas than on proven science, we put our trust in the medical men (and before that in medicine men). The sick may be the most vulnerable among us, so it's only natural to place faith, even if based on illusion, in those we believe can soothe our aches and pains. But medicine can never be got on the cheap. The Islamist terrorists could get into the United Kingdom largely because Britain has suffered a drain of native-born doctors. British physicians fled to other countries with greater opportunity; young men and women often turned to other professions with greater promise.

The brain drain began in the 1960s. When I lived in London during that decade I often heard the sneer that "British medicine is the best that Pakistan can provide." That was long before the Islamists of many trades and professions were recruited to kill infidels. White coats can suggest good works, and a stethoscope around the neck can tune in to beating hearts, but it can't reveal what's in the secret places of the heart of the doctor.

The history of medicine is rife with villains who signed up to do the devil's work. It's only human to weave myths around particular professions, and medicine has been protected by the mythology that suggests that doctors are noble as a group even when the evidence points otherwise.

In "Passions and Tempers: A History of the Humours," Noga Arikha documents the false theories that dominated medicine for more than 2,000 years, false theories sometimes surviving long after gross errors and miscalculations were exposed. This was a mixture of arrogance and tenacity in the face of falsehood, a failure to let ethical behavior be the guide.

In other times in other societies doctors did their share of harm, too. In "The Nazi Doctors," psychiatrist Robert Jay Lifton tells how Nazi doctors contributed to genocide. Doctors in other places, too. The Soviet Union enlisted the collaboration of psychiatrists to diagnose dissenters as mentally ill and hid them away, drugged and suffering, in grim and sordid mental hospitals. Doctors in Chile of the Pinochet era tortured dissenters. Japanese doctors performed hideous experiments and practiced vivisection on prisoners, often without anesthesia, during World War II. Doctors of our own Public Health Service conducted experiments on 399 black men with syphilis between 1932 to 1972.

Some of my best friends are doctors, as the somewhat altered saying goes, but we have to look closely sometimes to see what's before our eyes. The Islamist doctors would have screamed bloody murder at being stereotyped if someone had suggested that they be required to submit to rigorous background checks, but in the new world, certain Muslim immigrants have raised suspicions about the intention of doctors of Islamic origin to "first, do no harm."

Doctors who have done harm are motivated by varying reasons and rationalizations, visionary motivations to rid the world of those whose religion or race or ideology they believed inferior to their own. The Nazi doctors designed and participated in "medicalized killing." The Islamist doctors who connived to explode automobiles in places where they would inflict maximum brutal death on innocent men, women and children were men who wore their professions as camouflage, enabling them to gain greater access to the innocents. Both acted from a psychology that destroys boundaries between healing and killing. They were trained in the healing arts, and skilled in the arts of evil as well.

The Hippocratic Oath is an ancient document that calls on Greek deities reflecting more than mere healing. Apollo is invoked as a physician, but also as a symbol for light and truth. The oath compels doctors to protect patients from injustice as well as physical harm. The medical arts, though imperfect, are considered gifts for the living. The poet W.H. Auden, whose father was a physician, grew up learning that "healing . . . is not a science but the intuitive art of wooing Nature." What a wonderful phrase. Doctors of death seek to pervert Nature. Nobody admires a pervert.