Gorillas in the Nursery 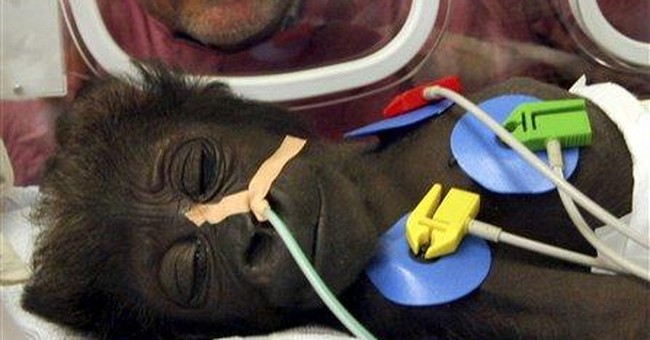 Mary Zwo was six weeks old, neglected by her mother and abused by her father, when she was admitted to a pediatric intensive care unit at a university hospital. Mary was dehydrated, with low blood sugar and at risk of hypothermia. Doctors quickly put her in an incubator. Mary Zwo is a gorilla.

"Gorilla babies are similar to human babies," the German zoo director in the western German city of Munster explained to der Speigel magazine. Her human caretakers ("caregivers"?) thought the care in a veterinary clinic wouldn't be good enough.

Mary Zwo is still not getting the public attention that Knut, the white polar bear cub rejected by his mother in the Berlin Zoo, received a few months ago. Knut became a global celebrity. A gorilla isn't as cute as a bear and doesn't evoke the same warm cuddly human feelings.

Confusing people with animals is fashionable over here, too. If you want a friend in Washington, as Harry Truman famously observed, get a dog. If you're a presidential contender, you had better be as nice to the dog as you are to your kids. Mitt Romney lashed the dog's kennel to the roof of the family car, along with the suitcases, when it was off on a family vacation. A few miles down the road and the dog got a sudden attack of tourista, soiling himself and the car, and there was no sympathy for Romney when he had to stop for a considerable clean-up. The animal-rights lobby instructed him sternly that he should never put the kennel anywhere he wouldn't put one of the kids. (This could give a parent ideas.)

Mary Zwo hasn't so far inspired animal rights advocates to ask that Mary be put to sleep to avoid having to live "unnaturally" in a zoo. So far, no demands to include gorillas in the medical-care system for human Germans, but that may be coming. But if human mothers object to their infants lying in an incubator next to a baby gorilla, they should keep quiet about it, particularly since Mary Zwo has recovered and is back at the zoo.

Some people confuse kids and animals (sometimes easy to do). Kama, a dolphin trained by the U.S. Navy and domiciled in an aquarium in Boston, became a cause celebre when he was moved to the Naval Ocean Systems Center in Hawaii. Animal-rights fanatics sued on behalf of the dolphin, claiming the transfer violated his rights, that Kama's life would be in jeopardy in the new environment. The case was thrown out on a technicality, no doubt when the judge smelled something fishy.

Steven M. Wise, Kama's lawyer, has written the inevitable book about it, which Jane Goodall, the primatologist who documented the humanlike behavior of chimps describes as "the animals' Magna Carta." It's called "Rattling the Cage," and Harvard has appointed Wise to teach "animal rights law." This isn't the first time a university has appointed someone to teach something that doesn't exist. Peter Singer, the Australian philosopher who advocates killing certain disabled babies up to 29 days after birth, teaches at Princeton University's Center for the Study of Human Values.

Respect for human life has always been the gold standard for measuring the morality of a society, but for how much longer it is difficult to say. Frank Furedi, a sociologist, shows how the environmental movement perpetuates the notion that humans should be regarded with suspicion, even hostility, as predators of the planet. The vocabulary of our era is despoiled by an ideology of cultural pessimism and loathing of the human species. Such terms as "ecological footprint," "human impact on the environment" and "human consumption" evoke a sense of dread, what he calls "the new misanthropy." Anyone who suggests that man is superior to beast is a "speciest." Making a politically incorrect purchase is judged "unethical."

A "speciest" does not have to do something bad to warrant prosecution, or at least persecution, but only to do something perceived as bad by animal do-gooders. Driving a car big enough to protect the kids is bad; leather belts and shoes are bad. Fur is an atrocity on par with Auschwitz. Advances in the production of chicken and eggs (no matter which comes first) offer cheaper nutrition for families on a low budget, but are labeled as "man's inhumanity to animals."

It's testimony to human achievement that doctors were able to save the life of Mary Zwo, whose name translated from the German means Mary Two. The original Mary was killed at the age of five months by another gorilla. We should be wise enough not to confuse gorilla "rights" with our own. The gorillas don't. You could ask one.