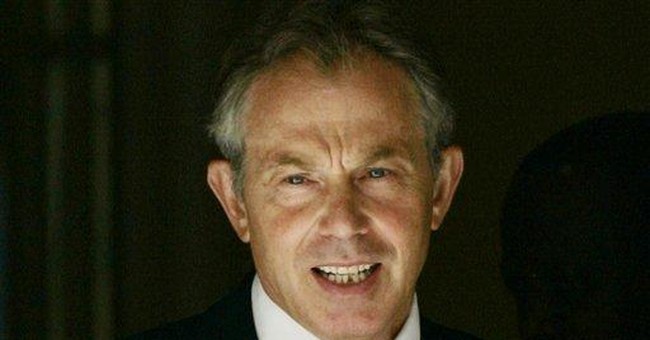 LONDON -- More than 700 nude bicyclists pedaled from Hyde Park to Wellington Arch the other day to protest global warming and excessive emissions from automobiles. Their message was better "nude power" than "nuke power."

This was the fourth annual World Naked Bike Ride, with cyclers in 60 cities participating this year. The bikers want to flesh out the pleasures of fresh air cycling and persuade others to enjoy pedal pushing without pedal pushers.

"Bikes and naked bodies harm nobody," one biker told the BBC. That depends, of course, on your aesthetic sense. These were not necessarily the likes of the beautiful nudes on the Elgin Marbles in the British Museum. But we get the point.

Tony Blair has been giving vigorous farewell speeches in preparation for stepping down as prime minister, but anyone who knew London in an earlier day -- I lived here for several memorable years in the 1960s -- senses a country beset with doubts, fears and dark thoughts about what has happened to the culture. The world power is long gone. The royal family has become all too ordinary. Education once hailed for its discipline and rigor is as flabby as some of those exposed bums pedaling past Hyde Park.

A report by the General Teaching Council, an independent regulatory agency appointed by the government, describes children in British schools as unmotivated, intractable and bored. There's plenty of blame to go around, but the prescription ordered by the educationists sounds worse than the ailment: "Let's just stop testing." That's a little like saying to a sick patient that "you're fine as long as we don't take your temperature, your blood pressure and your pulse."

The council wants to abolish standardized tests now mandatory for students aged 7, 11 and 14. The tests are said to be so stressful that psychologists are more and more frequently called on to treat anxiety attacks. Surely these can't be descendants of the English sailors at Trafalgar, of Wellington's legions at Waterloo, or the blokes whose stiff upper lips could not be softened by the Blitz.

Today's teachers don't sound like Mr. Chips, either. They're feeling stress from the pressure to produce students who make high grades on the tests. One teacher under investigation for helping her students cheat on an exam hanged herself.

England's teachers have a problem Americans can recognize -- teaching so narrowly to the test, requiring memorizing facts and dates -- students fail to comprehend what actually happened. When test grades are all, teachers and students conspire to achieve high scores on statistical tables without thinking through complex ideas.

"The range of knowledge and skills that tests assess is very narrow, and to prepare young people for them they need a set of skills that are far broader," says Keith Bartley, chief executive of General Teaching Council, in an interview with the London Observer. That sounds about right, but surely it would be better to change the tests, not abolish them. Our own Scholastic Assessment Tests (SATs), for example, have added an essay question to open a wider sample to assess actual learning.

England, like America, suffers from the consequences of political correctness. What it means to be British is lost in a blush of multiculturalism. After the London Underground bombings in 2005 by three native Englishmen of Pakistani origin and one Jamaican immigrant, all Muslims, the government formed a commission to find a way to develop a greater sense of citizenship. The commissioners came up with one obvious suggestion. Along with learning about Martin Luther King Jr., Mohandas Gandhi and Nelson Mandela, great men all, English schoolchildren should also study the greatness of David Lloyd George and Winston Churchill, and how they led the nation through two world wars.

Themes of British identity are being debated now by Tory and Labor parliamentarians. Gordon Brown, soon to follow Tony Blair at 10 Downing Street, sounds like an old-fashioned Englishman, demanding "British jobs for British people" and rebuking firms that prefer to hire low-paid immigrants to Britons. (Sound familiar?) Others have joined him in proposing a national holiday to celebrate what it means to be British.

David Cameron, the Tory leader, urged Muslims to take pride in Old Blighty, and suggests copying the American model of shared values found in the daily Pledge of Allegiance, the celebration of the Fourth of July and the observance of Thanksgiving Day. Guy Fawkes, celebrated for trying to blow up Parliament two centuries ago, doesn't quite cut it. It's quaintly satisfying to an American to see the mother country looking to the colonies for inspiration.