Sour and in Decline 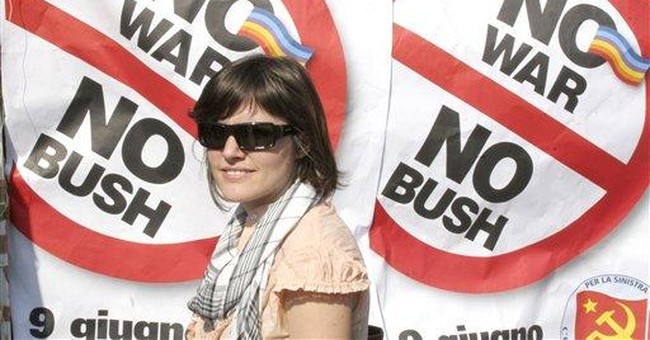 TODI, Italy -- From the window of a farmhouse, high on an Umbrian hill, a summer visitor is entranced by the view of a gentle landscape punctuated with olive and cypress trees, grape vines, lavender and thyme. In the middle distance, Todi, a medieval Italian town frozen in time, invites the contemplation of history.

Visitors like me were once ridiculed as Ugly Americans. In my student days, Europe was forever reminding us that the United States was young, immature and inexperienced. Europe was old, and though a little stodgy, quite grand. We were brash and confident -- and why not? We had won World War II and initiated the Marshall Plan that helped European recovery. But we still suffered a bit of an inferiority complex, aware that the beloved country was loud and slightly vulgar, lacking the rooted traditions of the remnants of the Roman Empire. Ah, youth.

Europeans continue to mock the New World, sneering with condescension whenever the name of George W. Bush enters the conversation, as it always does. Beneath the envy of American productivity and prosperity, the yearning for the goods, the books, the movies and the culture that Europeans affect to loathe and can't get enough of, there's still George W. to deride, to ridicule, to scorn. It's just about all they have left.

Unwilling, unlike some of our politicians who know better, to join the criticism of the president in a foreign land, I listen aggressively and rebut gingerly the arguments of old friends as we sup on the superb pasta and sip the mellow local wine. What becomes abundantly clear is that however fierce the European scorn for everything American, Europeans offer no persuasive defense for their lack of energy and creativity. They're tired. Their ideas, when they offer any, are stale. It's as if they've come to terms with living in a theme park of the Old World.

In "The Last Days of Europe: Epitaph for an Old Continent," Walter Laqueur describes how Europe's promise after World War II, its amazing recovery through the Marshall Plan, led to the belief that its "soft power" would become a unifying force and give birth to common institutions. "The recovery was not just economic," he writes. "Not only were European living standards higher than ever before, but also welfare states were established, providing essential health and other services and free education. No one any longer had to fear disease, old age and unemployment." Europe was not Utopia, but Europeans believed in their future.

The optimism did not last long. Those who wrought the miracle were Europeans -- Frenchmen, Italians, Spaniards, Portuguese and Yugoslavs. The immigrants drawn here by the miracle, numbering in the millions, came from the Middle East and Africa. They didn't want to return to their countries of origin, nor did they want to adjust to the customs of their adopted homeland. Assimilation was something to avoid. Attitudes didn't change with the following generation. While unassimilated immigrant birthrates soar, the Europeans soon failed even to replace themselves.

Demography accelerates intellectual and economic decline, and the "quality of life" founders. The economy fails to sustain the growth that once inspired robust confidence. Unemployment rises along with government payments to the unemployed. Students stay in college for as long as they can find a reason for not getting a job; the student population grows to 10 times the size in earlier generations. Welfare and medical costs soar. The ambitious individualism of American capitalism is scorned as a model. The Europeans love their 35-hour workweek and their five-week vacations, and there's no recognition of the hard fact that making money to pay for the good life requires skill, ambition and competition.

Germany provides a fascinating example of a country caught unprepared for success. Its economy is booming, despite a growing dearth of qualified employees. Retired seniors are recruited to fill in the gaps, but post-pensioners, known as "silver workers," have few economic incentives to return to work. Employers are anxiously trying to make work more rewarding.

The rejection of a continental constitution by the Netherlands and France has soured enthusiasm for the European Union. New heads of state in Germany, France and Britain are counted on to bring European nations closer together -- but they might not. Walter Laqueur paints a pessimistic picture of Europe turning into a kind of European Disneyland with tourist guides, gondoliers and translators pitching to the visitors: "Ladies and gentlemen, you are visiting the scenes of a highly developed civilization that once led the world. It gave us Shakespeare, Beethoven, the welfare state, and many other fine things..."

The prospect was enough to send me hurrying off to Assisi, to gaze upon Giotto's frescoes of St. Francis preaching to the birds. You seek illumination where you can.