The Clowns and the Chancellor 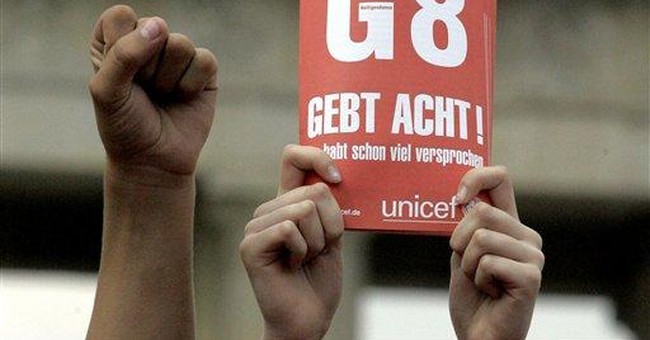 BERLIN -- The G-8 summit brought in the clowns, and now the demonstrators are gone, with their painted sardonic smiles of greasepaint only a mocking memory. The jester foes of globalization aspired to apply the needle to deflate Angela Merkel's moment of triumph along the Baltic coastline, lined with storybook castles and glistening seascapes. She got her photo-ops with her seven male counterparts.

Bild, the German tabloid, called her "Miss World" in a blockbuster Page One headline, an accolade for her "crowning" achievement. But in this gaggle of political groupies, Merkel's chief competition at Heiligendamm was Cecilia Sarkozy, the new "first madame of France," described in breathless chic magazine prose as "Jackie Kennedy a la Francaise." Madame Sarkozy, a former fashion model, didn't stay around long enough to enjoy her celebrity. She doesn't like sharing the spotlight with her husband. The German reporters gushed with cowgirl metaphors to describe how Frau Merkel had tamed the men. But they were not really buckaroos and couldn't even stay in the saddle with George W. Bush during the climate-change rodeo.

Frau Merkel accomplished nothing specific, and there was no historic moment to seize. But she succeeded in European eyes for getting George W. to return to climate control talks at the United Nations, rather than have his say at a conference of his own. Even that, such as it was, was less than meets the eye. With his cowboy deference and a toughness reminiscent of John Wayne as Rooster Cogburn, the president was content to let the lady in the big boots earn her spurs and show his true grit by preventing the adoption of mandatory targets for reducing carbon emissions. He appealed for industrial ingenuity to reduce emissions without curbing economic growth. The emissions are already falling, according to The Wall Street Journal, by 8 percentage points in the first four years of the new century. George W. even revived interest in nuclear power, which is not a big seller with the anti-nuke activists.

None of this impressed the clowns, of course. They derided the summit as obsolete "political marketing," as if the demonstrators themselves were not obsolete, behind the curve and even quaint. "Globalization," said Frau Merkel, "offers enormous opportunities for all countries to grow and prosper." She observed that 8 million German jobs are dependent on exports already, and Germany stands to benefit even more as robust economies emerge from stagnation. Graffiti decrying the summit was scattered throughout Berlin, but for the average German the summit was a yawn. Business as usual was the order of the day, and Germans love order. Europe is enjoying unusual summer weather, and if it's global warming that's causing it, hooray, anyway. The outdoor cafes, parks, swimming pools and nearby lakes are crowded with families catching the friendly rays.

Only in Kreuzberg, a neighborhood devoted to "alternative" attitudes (Che Guevara T-shirts are still popular), was there much fuss about the summit. Kreuzbergers are descendents of the West Berlin neighborhood that spawned a punk protest culture before the wall came down. The red flag was once raised in solidarity with the Communists, and the neighborhood proudly calls itself a "McDonald's-free zone." The Kreuzbergers mean it, too. Ronald McDonald, the clown mascot for the Big Mac and all the little Macs, has been warned not to set his splay foot anywhere near their falafels.

The postal service, in a stealth move five years ago, sold a piece of property in Kreuzberg to McDonald's, and the community rallied with cries of "Kein McDoofin Kreuzberg" -- "No McStupid in Kreuzberg." Now they have a website that unites anti-capitalists with anti-burger burghers, arguing that it's "a health issue." But Turkish entrepreneurs hear no criticism of their doner kebab, made of lamb (or mutton) at 550 calories, which compares to the 505 calories in a Big Mac. Observed der Spiegel newsmagazine: "And wasn't there some report on the news about spoiled meat being used in doner kebabs?"

McDonald's has added salads and yogurt to the menu, and showed sensitivities to Islamic cultural considerations with the introduction of a "halal" burger in England, made of meat from animals killed in keeping with Islamic dietary laws. Whether its new salads and yogurts, to accompany the burgers and fries, can compete with kebabs and falafels in Kreuzberg and add the McCulture to multiculturalism will depend on how open the Germans, and their neighbors in the European Union, really are to an open market. Ronald McDonald was conspicuously not among the other clowns at the summit.