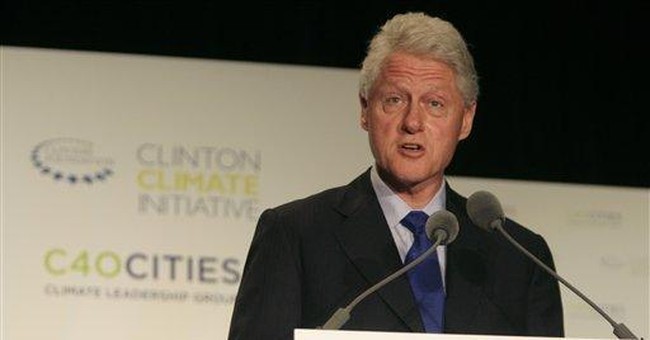 The feminists got one thing right. The personal is political. The phrase is stretched out of shape to cover a multitude of occasions, but as a rock-bottom truth it holds up. Just not the way it was originally intended.

Feminists of the '60s used it to identify their subjugation. They held endless consciousness-raising sessions to berate the men in their lives, as well as the "conservative values" that forced on them cultural roles of "gender" rather than sex, as determined by biology. They identified marriage and motherhood, in Betty Friedan's memorable phrase, as "living in a comfortable concentration camp." That was hyperbole, vulgar and perverse.

But as women were educated and entered the job market in huge numbers, sexual politics changed. Bill Clinton campaigned with Hillary in 1992, promising voters they could "buy one, get one free." That didn't sell; Americans don't like someone they didn't vote for exercising power over them. In her own campaign for president, Hillary is running on "their" record in the White House, but suggests her husband will be an adviser, not a co-president. (If you believe that, I've got a Jefferson Memorial to sell to you, a nice weekend cottage on a lake shaded by cherry trees.) If their last name were "Wolfowitz," Hillary would find work for Bill outside the White House.

"First Man" is just not the same as "First Lady." Bill would never complain about being expected to stay home and bake cookies, but he complains a lot about being on the street after eight years as the most powerful man on the avenue. Bill's friends and acquaintances confided to Bob Tyrrell, for his revealing book "The Clinton Crack-Up," that despite his troubled tenure in office, Bill hates being out of office: "In fact, wherever he is right now, whatever he is doing, you can be certain that he would rather be at 1600 Pennsylvania Avenue."

When Queen Elizabeth II visited Washington the other day, reporters and columnists went gaga, cheering America's love affair with royalty. Britain's The Economist magazine observed that it didn't take a visit from a British monarch to give the White House an "air of royalty." Royal fever is contagious. If Hillary is elected in 2008 and re-elected in 2012, "the world's greatest democracy will have been ruled by either a Bush or a Clinton for 28 years straight." Or as Michael Barone put it, "Bush, Clinton, Bush -- Clinton? It sounds like the War of the Roses." That's not exactly a royal flush, but it does add a dimension to the fusing of the personal with the political. Bill's celebrated promiscuity has not risen to the level of Henry the VIII -- when the king lost his head over a woman, she was likely to lose hers later -- but his White House rutting inevitably concerned affairs of state.

Monica Lewinsky was less about a sexual liaison than about the way it exposed the president's lack of dignity and self-discipline. When he lied under oath about it, the personal became the political and impeachment followed. Hillary Clinton dealt with it by turning the personal back to political, inventing "a vast right-wing conspiracy" to blame everything on. We can expect her to revive this fantasy as needed.

For now, she understands that the less said about all that the better. Many women say they'll vote for Hillary because she's a woman, counting on the herd mentality. But this underestimates the thinking women and it's countered by men who vow they'll vote for anyone but Hillary. Campaign '08, once it actually gets here, is likely to be issue-oriented, and fears of Islamist jihad will trump other concerns.

Hillary must be wary about too close an identification with Bill, popular though he is in many quarters. Bernard Lewis, the eminent scholar of Islamist terror, argues that the Clinton administration gave Osama bin Laden the idea that America was weak, indecisive and vulnerable when Bill Clinton didn't respond to the terrorist attacks on his watch -- the first World Trade Center bombing in New York in 1993, attacks on U.S. soldiers in Mogadishu in 1993, the Khobar Towers bombing in Riyadh in 1996, the attacks on the American embassies in Kenya and Tanzania in 1998 and the assault on the U.S.S. Cole in Yemen in 2000.

Hillary is nevertheless betting that her husband is more popular than she is and he can raise money and warm up her image. His Southern drawl is the real thing, too. He knows that she knows that he owes her, big. He's her security blanket. But security blankets lead to dependency and when they disappear, tears and tantrums typically follow. Freud said both love and work were important in life -- but not necessarily in the same place.