The Media is the Politics 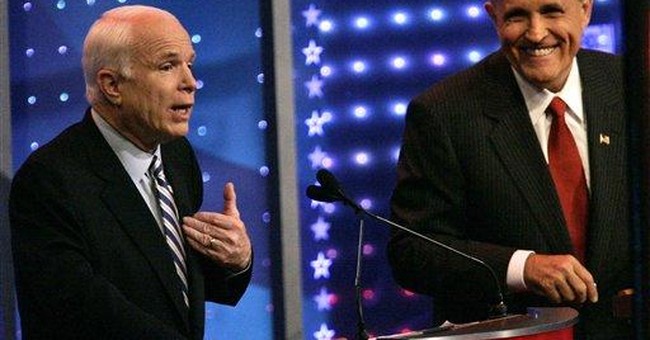 The "debates" between the current crop of presidential wannabes bear little resemblance to the stirring intellectual drama of Lincoln and Douglas, but they accurately reflect our times. Short answers to trivial questions for short attention spans. There's little opportunity for eloquence in a sound bite and it's not likely that television audiences would stay tuned if there were.

Politics is a victim of the electronic culture, just as the voter who chooses his candidate based on it. When body language becomes as important as verbal expression, when intellect is reduced to image, caricature inevitably becomes substance. In less than half a century, our culture has undergone a radical transformation in how we process information. That's the good news. The bad news is that it can only get worse.

The shift from reliance on carefully wrought ideas, developed through language, to learning through imagery, is almost total. It starts in the crib. A new study reported in the Archives of Pediatrics and Adolescent Medicine finds that 40 percent of babies under three months watch television regularly and 90 percent of children under the age of 2 do. These babies have not yet been counted in the Nielsen ratings, but they have established their favorite shows, often the ones their parents watch.

In a random telephone survey of 1,000 parents of children ages two months to 2 years in Washington state and Minnesota, parents said they let their babies watch television for "fun and education." Few of them admit they use the tube as an electronic babysitter.

In other studies, doctors suggest that babies who watch television experience changes in their brain development at a time when they should be learning to talk through association with the larger of their species. Tweens and teens who overdose on television are more at risk for making poor habits of learning, leading to poor grades.

Adults who grew up in a transitional society with a strong reliance on the written word are more likely to use the electronic media selectively. But the percentages are declining. We joke that we rely on our children to teach us how to program our computers and cell phones (who's joking?), and we don't think much about what our kids have lost in the bargain.

The shift from the printed page to what we see on a flickering screen has wide-ranging ramifications for how we think. The printed newspaper is losing circulation as its readers move to the Internet and television, which means the gatekeepers of information are becoming a different breed, too. That's why Rupert Murdoch's bid to buy the Wall Street Journal from the nurturing Bancroft family has struck horror in the hearts of newspaper readers.

We're losing the patience developed through reflection and perception provided by leisurely reading long and complex books, or even magazine articles and the op-ed pages. Camille Paglia, who writes about culture, likens the young to the astronaut in Stanley Kubrick's epic film "2001: A Space Odyssey," who spins helplessly in space when a master computer goes amok. "The new generation, raised on TV and the personal computer but deprived of a solid primary education, has become unmoored from the mother ship of culture, " she writes in "The Magic of Images," an analysis of the ways education fails the young. The young are flooded with disconnected images and fragments of ideas. They're left without the ability to make or sometimes even understand coherent argument.

Most of the current political candidates are smart and well educated, but they dumb down content to fit the audience, tailoring their messages to a shrinking framework. Youngsters for whom flickering images become more important than an expanded vocabulary built up through books depend ever more on the acceleration of the delivery of dribs and drabs of information. "The computer, with its multiplying forums for spontaneous free expression from e-mail to listservs and blogs, has increased facility and fluency of language but degraded sensitivity to the individual work and reduced respect for organized argument, the process of deductive reasoning," says Paglia.

How we process information tears down the wall between the popular culture of entertainment and the side of politics that enables us to critically assess character and measure intellectual content. When I watch from my treadmill episodes of the television series "24," which depends on intense action drawing on images guided by fast-moving technology, I run twice as fast as when I watch the news. When it's over I look forward to settling back into the printed word. The tiny tots raised in front of the television screen may never learn to do that.