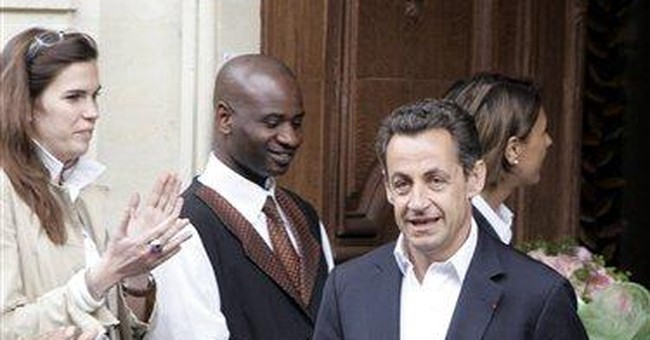 Nicolas Sarkozy talks about "new cleavages" in France, but he's not talking about Parisian decolletage. The man France elected president is talking mere politics, about the "social cleavages" between the left, demanding more government largesse and rigid laws mandating laziness, and the right, railing against the 35-hour workweek as devaluing merit and undercutting competitiveness in a hard new world of market economies.

Monsieur Sarkozy seduced enough of the women of France to run his majority to 53 percent. When his Socialist opponent, Segolene Royal, campaigned as a feminist and worked on her image as a "mother" who would be France's first female president, the French media swooned. So did the intellectual class, but nobody else bought the feminist-first mystique. Like women in America, the women of France voted for the candidate they thought would be the most competent leader. A woman is a woman, but that doesn't necessarily make her the best president.

"We do not want a president who changes her ideas as often as she changes her skirts," hissed Michele Alliot-Marie, the conservative defense minister. Madame Royal's perceived superficiality was derided by another female commentator who called her the "Emma Bovary of politics," reprising Flaubert's novel about a bored housewife who seeks excitement in a world she doesn't understand. What Mme. Royal needed was Cyrano de Bergerac to give her words power if not poetry. She never found the answer to the famous question posed by Freud: "What do women want?"

The Royal defeat ought to be cautionary for Hillary Clinton. Women, like cats, are not easily herded. They don't necessarily, or even usually, vote as a bloc. Most women in France, like most men in France, try to balance a satisfying home life with a successful work life and understand that rigid limits on the workweek retard their ability to tailor work to the different stages in their lives. One size does not fit all. "When you're young, you're ready to work like crazy to start a family, buy a house, and get your career off the ground," M. Sarkozy says. "Those who want to earn more want the freedom to work more."

That's a tough sell in France, considerably tougher there than here. When France enacted a law enabling employers to dismiss workers under 26 who, after two years in the job demonstrate that they can't do satisfactory work, college students protested as if they were denied their birthright. They regarded as that birthright moving from ma mere l'Oye , or Mother Goose, to ma mere l'Etat , the goose of state responsible for laying the golden egg. They wanted to eat their eclair and keep it, too.

M. Sarkozy prefers the American model. French Socialists, he says, look on work as punishment, something everyone should try to escape. "American society, on the other hand, understand that work well done is liberating." He defends not only the work ethic, but how the rewards of that ethic are distributed. "What could be more just than to ensure that those who work hardest and make the extra effort are able to earn more money and climb higher in society?"

The cleavage M. Sarkozy decries includes the deep chasm between the United States and France. Not since Lafayette and Rochambeau saved Washington at Yorktown have the two countries expressed authentic affection for one another. The American ascendancy in world affairs coincided with the French decline, and jealousy, as Richard Chesnoff reminds us in "The Arrogance of the French," destroys affinity. Actor Yves Montand compared America to "the worst kind of beautiful woman; a powerful woman that we desire but feel unworthy of, and whom we must therefore degrade."

Reconciliations have been sporadic and brief. The French loved the Americans who liberated Paris in 1944, but memories fade and affection sours when gratitude turns to resentment. When Charles de Gaulle demanded that the United States take its NATO soldiers out of France, Dean Rusk, Lyndon Johnson's secretary of state, asked with blunt eloquence: "Should we dig up our dead in Normandy and take them home, too?" The Paris newspaper Le Monde, in a fit of reconciliation after September 11, remarked that "We are all Americans now." The sentiment waned when America went to war against Saddam Hussein.

"Whatever our disagreements, France and the United States share the same values: freedom of speech, thought and faith; equality between men and women; and love of life," writes Nicolas Sarkozy in his book, "Testimony," which became his campaign manifesto. "We will prevail if we stand together." Kissing can be nice, but it takes more than a kiss in the heat of a moment to reconcile.