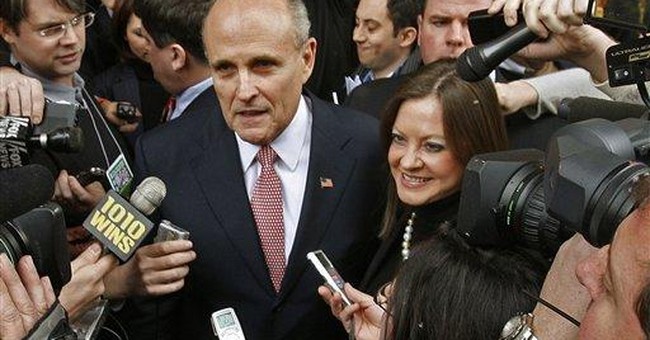 Where is Jane Wyman now that we need a good example? After she and Ronald Reagan were divorced in the '40s, and he became more politician than movie star, she never spoke about their marriage or their years together. That was their business, not ours, and she treated it so.

But that was a long time ago. Today we think we're entitled to know every naughty fact about a candidate's marriage and nocturnal adventures. We say we need to know all that to read character, for insights into the nature and temperament of everyone who wants to be the president of the United States. That may be true, but it may be irrelevant, and most of the time all we really want is titillation.

Does anyone think Franklin D. Roosevelt would have been a better wartime leader if he hadn't cheated on Eleanor? He might not have given the first lady so much responsibility if he had wanted to keep her closer to home. A scandal would have distracted him from the business of war, and that certainly wasn't in the public interest.

This was not necessarily true of John F. Kennedy. He was defiantly careless in his extra-marital liaisons. Judith Exner, one of his favorite mistresses, was simultaneously sharing the bed of a Mafia don, and pillow talk is always fraught with risk of blackmail. The result could have been devastating for all of us. If Jack Kennedy had lived to serve out his term, he might have been impeached.

When Bill and Hillary Clinton appeared on "60 Minutes" to talk about their marriage early in the '94 campaign, they more than hinted that Bill had been busy in the boudoirs of Arkansas, but voters gave him a pass. His greater offense lay in the future when he lied under oath (the crime that may send Scooter Libby to prison) about his liaisons with Monica Lewinsky in the Oval Office pantry. The perjury, not the liaison, sordid as it was, is what got him impeached.

By contrast, John McCain's first marriage, divorce and subsequent new marriage are part of his biography, and so far it doesn't seem to weigh very much on the public mind. That may not turn out to be true for Rudy Giuliani, who has been married three times. He divorced his second wife while he was mayor of New York, and the messy details suggest a lack of careful judgment. He uses his third wife in his campaign, and that aggravates a perception problem, too. She introduced him at a recent fund-raiser with a remark open to innuendo -- "I wanted to tell you all a little bit about how Rudy and I came to be our team together" -- that surely made his handlers wince.

Voters usually understand human vulnerability and the perils of temptation, particularly when it's in the interests of the country to do so. Rudy Giuliani's strong leadership in the wake of 9/11 continues to give him high poll numbers among conservatives. Public presence can trump personal flaws.

Newt Gingrich's randy past tests voter indulgence, too. He has publicly acknowledged that he had an adulterous affair with an aide whom he subsequently married, and he insists that he won't further discuss personal issues. (If he runs for president he will, like it or not.) He wants to talk about ideas, and he has lots of them. He organized something called American Solutions for Winning the Future, to hold workshops to talk about health care, the economy and foreign policy, all to be put on the Internet. He's counting on the public to pay attention to his public-policy ideas, not ideas for a moonlit night.

He was warmly received by conservatives at the recent CPAC convention, where he warned of the risks of a campaign exploiting the personal weaknesses of candidates. "We will not defeat the Clinton machine by being negative," he said, "[but] by offering better solutions based on better values, with a deeper reach into the American people's minds and psyche and history. And it is by representing the future of the American people that we will defeat the left."

He says he won't make up his mind whether to run until after his September workshops. By then we'll know a lot more about all of the candidates, for better, for worse, and whether Jane Wyman will be a model for all those ex-wives out there.