Back to Bare Knuckles 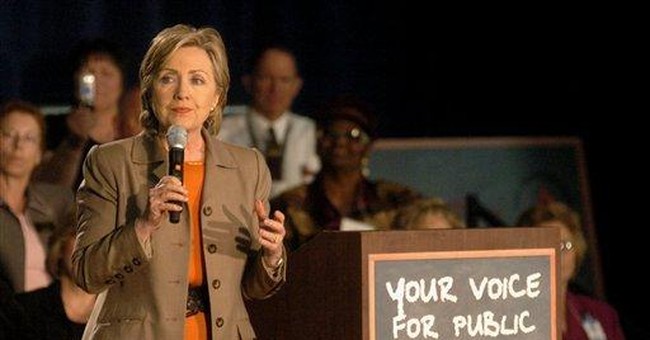 The early rounds of presidential boxing matches for the Democratic nomination are more for entertainment than politics. Like the prizefighter aspiring to be the champ, punching his way to the top, a presidential aspirant can't expect to land a knockout quickly, and it's a long way through the early rounds.

Hillary and Obama must summon the stamina that carried John L. Sullivan through 75 rounds until Jake Kilrain, bloodied and beaten to a pulp, could barely stand up. Only later would bare knuckles give way to padded gloves and 15 rounds. Hillary and Obama, who have already dispensed with the padded gloves, seem resigned to the 1889 rules.

My late father promoted fights -- he matched Joe Louis against Max Baer for the championship in Washington's old Griffith Stadium in 1941 -- and Mom sat perched at ringside center. He checked with her after each round to learn whom she gave the round to, and she had an unerring eye for punch and counterpunch.

Television gives us all ringside seats now, but it's harder to call the winner of the rounds when the White House is the prize. Obama wants to avoid toe-to-toe combat, to keep his distance from Hillary's left hook, but he had to move in closer than he wanted after Maureen Dowd, our premier gossip columnist, coaxed the hot skinny from David Geffen, the Hollywood movie mogul. Hillary's little fists delivered a flurry of punches at Geffen and some of them hit Obama, but he wanted to spar and block, protecting a pretty face from the inevitable cuts and bruises.

No matter what the candidates say about negative campaigning, the skill to hit powerfully at the opponent's vulnerability always determines who wins. That's why David Geffen's attack was so effective. It aimed at Hillary's weakness. "Everybody in politics lies," said the man from where the purest mendacity is manufactured, "but [the Clintons] do it with such ease, it's troubling." He reminded the feminists how she stood by her philandering man, clinging to borrowed presidential power through feminine wiles and "weakness." He reminded voters of her "lies" in the White House, when she blamed "a vast right-wing conspiracy" for Monica Lewinsky, who was merely a one-woman conspirator.

But that's ancient history. As every fighter and presidential contender knows, you're only as good as your next fight. Barack Obama has set himself up as Mr. Clean, requiring him to fight passively (whatever that is), but he can only do that for so long. As soon as he lands a sucker punch after the bell or during a clinch, he's in trouble.

The only presidential candidate who ran a passive campaign, avoiding negative campaigning, was George Washington in 1789. But he had no opponent. Primaries, nominating conventions, political speeches and debates lay far in the future. He was elected by all 69 votes of the Electoral College.

"The first presidential election in American history was thoroughly undemocratic," observes Paul Boller in his book "Presidential Campaigns." But it was the perfect expression of the popular will, and a grateful public approved unanimously. He could have been king, but settled for being the unifying figure that candidates today can only dream of. He won his second term with a unanimous Electoral College vote, too, but by then two feuding cabinet ministers, Secretary of State Thomas Jefferson and Secretary of the Treasury Alexander Hamilton, had set up a vicious struggle over ideological differences. They drew the blueprint for future campaigns. Washington had warned about the "spirit of party," but the creation of political parties, which the writers of the Constitution had not anticipated, grew in proportion to personality and policy distinctions.

Intraparty rivalries started then, too. When John Adams ran for re-election against Thomas Jefferson, his subsequent loss was more the result of his own party infighting than hard licks delivered by the opposition. Alexander Hamilton, a fellow Federalist, sent a harsh letter to party members criticizing Adams. "I would be deficient in candor," he wrote, trying to take the high ground, "were I to conceal the conviction that he does not possess the talents adapted to the Administration of Government." He described Adams as petty, mean, egotistical, erratic, eccentric, jealous-natured and hot-tempered. And that was just for starters. Hillary would call this the "politics of personal destruction" (which she and Bill know a lot about), but the point that Adams lost is never lost on any candidate.

Bill Clinton describes his wife as a "tireless fighter." Hillary describes her pugilistic approach with more revealing bluntness: "When you're attacked, you have to deck your opponent." So we shouldn't expect anyone to play by the Marquis of Queensberry's rules. The marquis wouldn't last a round in this fight.