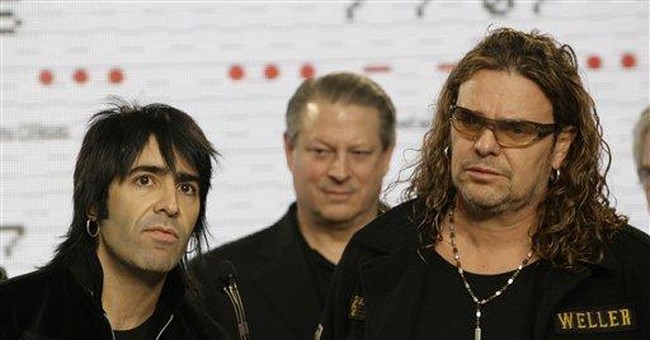 There's nothing like a celebrity sing-a-long to get the global warming juices boiling. Al Gore, the vice president who became a midway barker, has the greatest show on earth, maybe even the universe. He's offering a day of "Live Earth" concerts during the summer that will include musical artists and "thought leaders" such as Cameron Diaz, Snoop Dog and Enrique Iglesias. Hea-veee, as the kids used to say.

The carnival show will reach more than a million spectators with an additional 2 billion watching on television screens. Kevin Wall, who produced world tours for Madonna, is in charge and says he aims for coverage throughout the world, maybe even the solar system. "Two billion sets of eyeballs," he tells The Washington Post, "and we'll hand the mike to Al Gore."

The ex-veep is poised to take home one or maybe two Academy Awards for his documentary, "An Inconvenient Truth," and has been nominated for the Nobel Peace Prize. This could put him in the league with Obama and Hillary. He says he's not running for president in '08, but that may be because he wants to be president of the Earth, or at least the Whole Earth Catalog. Who wants to spend a winter in New Hampshire talking about the heat somewhere else?

Trendy notions are recycled overnight now, so Diesel, the Italian fashionista, is advertising the newest line as "Global Warming Ready." The designers are playing it for laughs all the way to the bank, but they're deadly serious about the Higher Cause. Models in global-warming-ready togs are photographed against a backdrop of Mount Rushmore with the sea flooding the nostrils of Washington, Jefferson, Lincoln and Teddy Roosevelt. The most colorful characters on Diesel's website, however, are penguins in their natural formalwear and a parrot in his coat of many colors. Diesel understands that among environmentalists, the lower animals trump the human animal every time.

All this could be great fun if it weren't so dangerous. Winston Churchill, after all, once observed that he liked pigs because "a dog looks up to you, a cat looks down on you, but a pig accepts you as an equal." But when politics, fashion and entertainment fuse with scientific "factoids," truth drowns in a flood of misinformation. In his new book, "Eco-Freaks," John Berlau, a policy director at the Competitive Enterprise Institute, a think tank devoted to environmental policies, catalogs the tragic mistakes imposed on the rest of us by the environmentally correct. After Rachel Carson published "Silent Spring," DDT was banned nearly everywhere. Most of her "evidence" later turned out to be all wrong, but 2 million poor Africans die every year of malaria that DDT was on the way to eradicating. Al Gore, of course, blames global warming.

Asbestos, like DDT, gets a bad rap in the popular media, but nothing else comes close as a shield against heat. The original plans for the World Trade Center called for the interior steel in both towers to be covered with asbestos-based fireproofing material. Asbestos was eliminated when environmentalists objected. Engineers think the twin towers might be standing today but for the politically correct construction. Asbestos would have at least slowed the spread of the fire and the melting of the metal, giving hundreds of those who perished a chance to escape.

Hurricane Katrina need not have been the tragedy it was. In 1977, the Army Corps of Engineers wanted to build large steel and concrete "sea gates" below sea level to prevent hurricane force winds driving storm surges into Lake Pontchartrain, overflowing into low-lying New Orleans. Such gates have been enormously successful in the Netherlands. But the Environmental Defense Fund, which had been a party to the lawsuit leading to the banning of DDT, persuaded a judge that the sea gates would discourage the mating of a certain fish species. Fishy romance trumped the lives of 3,100 Orleanians. "If we had built the barriers, New Orleans would not be flooded," says Joe Towers, who was counsel for the New Orleans District of the Corps.

John Berlau spreads blame at all levels of state and national government where intimidated politicians glibly hide behind "greening of America" soft-headedness. Not all ecophiles are goofballs, but many show considerably less concern for humans than for the kangaroo rat, the Delhi Sands flower-loving fly, and that little darling the snail darter. Radical environmentalism is often hazardous to your health. That's the inconvenient truth Al Gore ignores.