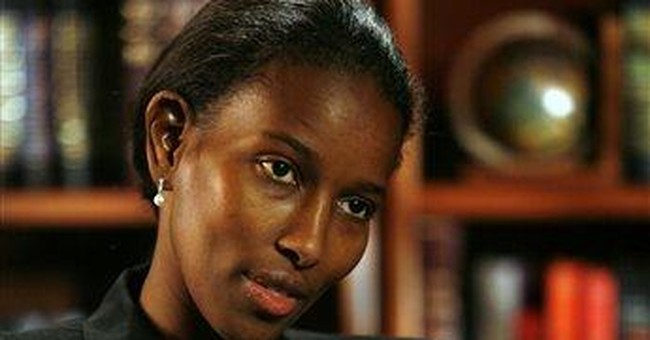 A generation ago, Betty Friedan wrote "The Feminine Mystique" to expose the misery of American housewives living in what she scorned as a "comfortable concentration camp." Gloria Steinem put on a bunny suit with a fluffy cottontail to dramatize the way the male customers regarded the bunnies at the Playboy Clubs.

Together they enlisted millions of followers and ushered in a feminist revolution on behalf of the most privileged women in the world.

Ayaan Hirsi Ali is trying to spark another revolution, one that reveals Western women of that earlier revolution as engaging in child's play. In her memoir, "Infidel," Ms. Hirsi Ali targets the tortured legacy of Islam, the way in which a literal interpretation of the Koran makes it difficult for women in many Muslim cultures to thrive, or even survive.

Her odyssey takes her from Somalia in her younger years to Saudi Arabia, Ethiopia and Kenya, always seeking a larger vision for her life. She endured painful female circumcision at the age of 5. As a teenager, she took pride and pleasure in wearing the hijab that covers the entire body in black, declaring her faith to all. Her intellectual odyssey finally takes her to Holland, where she studied writers of the Enlightenment and began to understand and appreciate democracy and the freedom to think for herself. She began to question her faith.

The world first heard of Ayaan Hirsi Ali when filmmaker Theo van Gogh was murdered on the streets of Amsterdam by a Moroccan-born Dutch Islamist who pinned a note to van Gogh's body with a dagger. Ms. Hirsi Ali had worked with van Gogh on a documentary titled "Submission," describing how Muslim women are often forced into arranged marriage and beaten if they disobey what the men understand as the teachings of Mohammed.

In Holland, she worked as a Somali translator and listened to many accounts of Muslim women who had been beaten, bloodied and raped by the men in their lives. She became an aggressive advocate. She pushed the Dutch government to keep records of "honor killings," and the findings of a pilot project initiated by the Dutch parliament astonished the public. In only eight months in just two small regions of the country, 11 Muslim girls were killed by their families for bringing "dishonor" to the family. (Such offenses range from going out with a non-Muslim, running away from an arranged marriage, or wearing lipstick and modern dress.)

As a Liberal Party member of parliament, she urged the Dutch to quit tolerating the oppression of Muslim women in the name of multiculturalism. This was a hard sell. She urged Muslims who lived where they could enjoy free speech to start a debate to expose inequities inherent in Islam. This was a harder sell. She urged Muslim women to understand that their suffering was not ordained even though they found interpretations in the Koran that sustained it. This was the hardest sell of all.

"People who are conditioned to meekness, almost to the point where they have no minds of their own, sadly have no ability to organize, or will to express their opinion," she writes. She understands their meekness and fear; she travels with bodyguards.

Her friends and colleagues told her that Islam had nothing to do with September 11. She disagreed, and argued that September 11 had everything to do with Islam as the radicals teach it. Islamist violence, she says, has nothing to do with poverty, colonialism or Israel. Mohammed Atta, the leading hijacker, was exactly her age, and she knew many men like him. She understood that these terrorists acted as if on behalf of Allah, counting on their brutal violence as validating "a one-way ticket to heaven."

She accuses "stupid analysts," especially those who call themselves "Arabists," as spinners of fairy tales, who know nothing about the reality of the Islamists but blindly defend Islam as "a religion of peace and tolerance." Those who look for reasons everywhere but in the Koran to explain Osama bin Laden and his followers are like those who would analyze Lenin and Stalin without reading the works of Karl Marx.

Ayaan Hirsi Ali lives somewhere in Washington, and works to expand her forum at the American Enterprise Institute, a conservative think tank. Each chapter in her book "Infidel" reads like a perverse version of "Tales of the Arabian Nights." Muslims, she insists, can transform their religion into one of peace, but they have a long way to go. Well-meaning friends in the West can help by appreciating the difference between fancy and fact, between myth and reality.