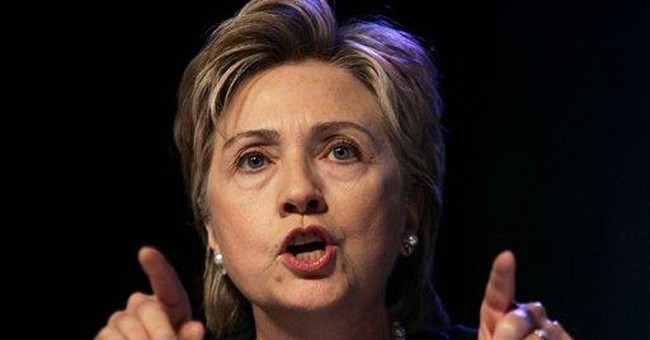 "Sexual politics" means a lot of things in Washington, even how men and women relate to each other, defining notions about femininity and masculinity. For better or for worse, as in the marriage vows. In Washington, "sexual politics" is usually more about power than sex. The Republicans are the Daddy Party, the Democrats the Mommy Party.

But the stereotypes are changing right before our eyes, and smart pols will take due notice now because public expectations and psychological perceptions will shape their future. Nancy Pelosi, pretty in pearls and looking warm and maternal surrounded by her grandchildren, wants to be perceived as one tough mother with a gavel.

Henry Kissinger said "power is an aphrodisiac," and that's certainly true for men, but so far it hasn't quite applied to women. We expect women in power to be defeminized, if not neutered. Think Maggie Thatcher, Indira Gandhi (and if you're old enough, Golda Meir). Geraldine Ferraro shared her recipes for blueberry muffins, and she got burned around the soft edges.

Nancy Pelosi is helped along by what John Lapp, former executive director of the Democratic Congressional Campaign Committee, calls "the Macho Dems." These men were recruited as a new breed of candidate, part of a strategy for winning back the Congress. "So we went to C.I.A. agents, F.B.I. agents, N.F.L. quarterbacks, sheriffs, Iraq war vets," he tells The New York Times. "These are red-blooded Americans who are tough."

How this will play out with the red-blooded American ladies who live in Gender Gap, so far a Democratic enclave, is not yet clear. "Macho McGovernite" is an oxymoron, and the left wing of the party, still addicted to McGovernite nostrums, wants to rewrite Teddy Roosevelt's famous dictum to "speak softly and carry a big shtick." The macho Democrats are culturally conservative, and how they clash with their liberal colleagues will give us clues as to how sexual politics will be played in 2008.

Hillary Clinton is the most vulnerable of the prospective presidential candidates, caught in a crossfire between the sexes, not quite sure how to conduct the power foreplay. The granny of her Wellesley College days has morphed into the fashionable, carefully coiffed middle-aged matron, inviting speculation that a little Botox has helped her look buff and even a little younger. But if a changed physical image serves her well, her political facelifts have not.

The unattractive icons to whom she is compared are legion, and Mother Jones magazine rounds up the familiar suspects. They range from Lady MacBeth, constantly trying to rub out the "damned spot" of memory, to Martha Stewart, always eager to freshen up the label with a little spot remover. When the old Hillary claimed that she was no Tammy Wynette, eager to stand by her man, the radical feminists who should have been her natural constituency imagined they heard Tammy singing from Monica's thongbook.

That's all ancient history, and the wife of the governor of Arkansas can only hope that now that she's a New Yorker, old times there are now forgotten. It won't be easy. The hardened feminists may decide they can vote for the humiliated wife if she can be counted on to carry their agenda into office, but this creates problems with voters swimming in the mainstream. One irreverent critic, looking at an artist's sculpture of her, sneered that she looked like "Jimmy Carter with boobs."

Hillary's big problem is that nobody can be sure who she is. Familiarity in politics is not meant to breed contempt, but comfortable acceptance. Her mistakes -- the health-care fiasco, the Arkansas financial shenanigans, her hug of Mrs. Yasser Arafat -- sent her underground for a season and made her little more than one of those life-size cardboard cutouts. Like Nancy Pelosi, she's a great fund-raiser, but unlike Nancy Pelosi, who was elected and re-elected by her liberal constituency, she has no consistent persona except that of a woman who easily changes her mind. We can hear someone saying it now: "Isn't that just like a woman?"

It doesn't matter now whether she was willing once to stand by her man. The voters of '08 will want to know where she stood when her man was making certain bad decisions, like, for example, letting Osama bin Laden get away when he was ripe for the picking. "The husband of" told Israeli television in 2005 that in some ways his wife would make a better president than he did "because of what we did together." The campaign of '08 may be the first to require the intense public scrutiny of a marriage. That will redefine "sexual politics" once more.