The army was sick and cold. Many of the soldiers had no shoes, but wrapped rags around swollen feet. Faces were marked with sores. The Continental Army had no appetite for crossing the Delaware behind their leader George Washington. And so they didn't.

But these soldiers weren't the soldiers in the Revolutionary War, but re-enactors, dressed in the authentic uniforms of Washington's army, gathered on the Pennsylvania banks of the fast-flowing river on Christmas Day this year to reprise the historic crossing. For three years past, they've been unable to cross because the weather outside was frightful. But so were the weather and the river on the dark night of the 1776 crossing, when chunks of ice crashed against the shore and dense sleet sheathed the cannon the soldiers strained to get into boats. The reluctance of the enactors - intelligent reluctance - underscored the courage required of the real soldiers on that real December night.

As it happened, only two of three groups Washington commanded actually made it across. Two other contingents had to turn back. The group that made it is immortalized in the famous painting, inspirational if not historically accurate, by Emmanuel Gottlieb Leutze in 1851 in Dusseldorf that is - or once was - reproduced in every school child's history book. 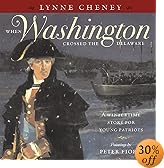 To set the record straight and to do a little inspiring herself, Lynne Cheney, the wife of the vice president, has written her own account of that fateful night in a children's book, "When Washington Crossed the Delaware: A Wintertime Story for Young Patriots." It's a wonderful way to challenge children with a page-turner that describes the fortitude required to get our young country underway, borne on the ideals of freedom and liberty. The successful crossing led to two major victories, at Princeton and Trenton, which were turning points in the Revolution.

Lynne Cheney waged an aggressive campaign for reviving historical memory when she was chairman of the National Endowment for the Humanities from 1986 to 1993, and that commitment has been taken up again by Bruce Cole, the new chairman of the Humanities. Since the city named for the general is a company town, and the company is partisan politics (and the more partisan the better), the Humanities endowment doesn't get the attention it deserves for reviving an awareness of our past, attempting to cure what historian David McCullough calls 'historical amnesia."

Bruce Cole speaks with passion about the need for young people to know their history. "Our country has been attacked," he said over lunch the other day in Washington. "Not only the Twin Towers and the Pentagon, but really the idea of our country, the ideas generated by the founders. How are we going to defend it, if we don't know much about it?"

To that end, the Humanities endowment sponsors an essay contest for high school juniors every year, called "We the People," asking them to reflect on the "The Idea of America" (www.wethepeople.gov). It's aimed at getting them to think about what it means to be an American, and why the liberties that make our way of life possible require a vigorous defense. The legislation that established the National Endowment for the Humanities noted that "democracy demands wisdom."

The essay requires clarity of thought and writing, talents that lead toward wisdom. Last year the subject was Lincoln's Gettysburg Address. This year students are asked to examine totalitarianism and the ways its goals and methods differ from the ideas that unite Americans. The winner earns $5,000.

In 2004, Rachel Shafer, a home-schooled student, wrote the winning essay about how Lincoln was echoed by Martin Luther King. "His tribute to Abraham Lincoln's legacy," she wrote, "like the opening of the Gettysburg Address, shows the power of remembering America's history and the great men and ideas that have determined it."

Historical ignorance is often abetted by an unabashed ignorance and political hostility, as shown, for example, by television interviewers equipped with more ego than knowledge. When Matt Lauer interviewed Lynn Cheney about her new book, he equated Islamic terrorists in Iraq with George Washington's ragtag army. "I'm just saying . . . the insurgents believe they're fighting for a cause as well," he told her. "They don't believe any less than we believe." (So did Genghis Khan, Hitler, and the James gang.)

Cheney reminded him that unlike the bombers and beheaders of Baghdad, the Americans are "on the side of freedom." The men shivering on the banks of the Delaware in 1776 understood that, too.