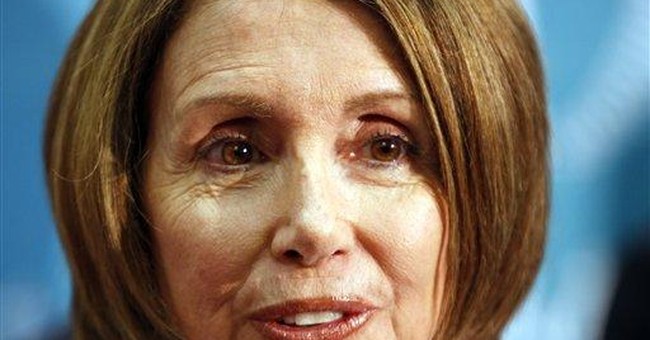 Each day thousands of farmers in California’s Central Valley depend on water to produce America’s food, but that water isn’t being delivered. Inaction from Speaker Nancy Pelosi, Congress and state legislators are leaving thousands unemployed, threatening national food security and further crippling the American economy by causing a man-made drought in the most fertile land in America.

California farmers are not receiving enough water to sustain their crops because lawmakers refuse to ease the application of the Endangered Species Act, creating dire economic and agricultural conditions throughout the Central Valley.

This disaster will have a ripple effect on food prices across the broader economy and make it harder for American families to put food on the table – in the middle of the greatest economic downturn since the Great Depression. Economists at U.C. Davis recently concluded that drought conditions, coupled with federal regulations restricting the flow of water, would lead to income losses of nearly $1 billion. With an economy already facing tough times, there is no reason to justify allowing costs to go up for consumers when we can prevent it with immediate action.

My time in both public service and the private sector has proven to me we can’t sit by praying for Washington D.C. or Sacramento, CA to so solve problems. When it comes to the current water crisis in California’s Central Valley, the time to talk is over. We need action. California needs water now.

Join me and sign this online petition asking Speaker Nancy Pelosi to bring “Water Now” to California.  We need to send a message to Speaker Pelosi to put American families first and support legislation for a more flexible application of the Endangered Species Act especially during times of emergency. Speaker Pelosi has voted for a similar exemption to aid New Mexico in the past, yet she stands in the way to provide relief for the farmers and workers of her home state.

Unemployment rates in some Central Valley counties are near 20%--and the news is even worse in a few California communities, like Mendota, where the unemployment rate is near 40%.  One scholar predicts that up to 30,000 jobs will be lost in the Central Valley, all because Speaker Pelosi and many of her colleagues in Congress have decided to turn their backs on California’s farmers, families, and small businesses.

During my current run for governor of California I have met with citizens from every corner of the state and they have explained to me how this water crisis has affected their livelihoods. Driving through the state, it’s hard to miss the miles of sandy wasteland, where crops once grew. Workers in California’s San Joaquin Valley cannot grow food, they cannot afford to buy food and many have turned to food banks to feed their families. America’s breadbasket is going hungry.

I’m running for Governor of California to solve problems and find solutions to the issues facing California. We are all tired of career politicians talking endlessly about issues. Bold and immediate steps are needed to restore the flow of water, save jobs, revitalize the economy and protect American families.

The most immediate action that you can take to get water to our farmers now is to pressure Speaker Nancy Pelosi to support legislation to encourage the more flexible application of the Endangered Species Act during times of drought emergency in California.

Already, hundreds of people have joined me by adding their name to the online petition to Speaker Pelosi. Many others have sent a message on Twitter to Speaker Pelosi using the hashtag #WaterNow asking Pelosi, Congress and lawmakers to turn the water on now and chooses American families and building a stronger economy.

Signing the petition to Nancy Pelosi is the most immediate action available and I encourage you to let your voice be heard, but I know that a more flexible application of the Endangered Species Act isn’t the type of comprehensive solution that will solve this problem once and for all

Accordingly, I have key proposals that will ensure we don’t find ourselves back in this situation again. California must invest in new infrastructure, promote water conservation and efficiency, and commit to innovative strategies that ensure the sustainability of nation’s natural resources. It’s important that we increase surface and groundwater storage so that we can be prepared for sustained dry periods in the state and that we empower our local water agencies to implement diverse water management strategies because our water system cannot function on a one-size-fits-all approach. Read my plan and leave your thoughts and suggestions.

After talking to farmers in the Central Valley and voters from all around the state, I know that easing the application of the Endangered Species Act in California is an issue that has bipartisan support. I also know that Californians want a comprehensive water plan so that we don’t find ourselves in the same situation a few years down the road.

Sign the Petition to Nancy Pelosi and send a clear message we need water now in California.