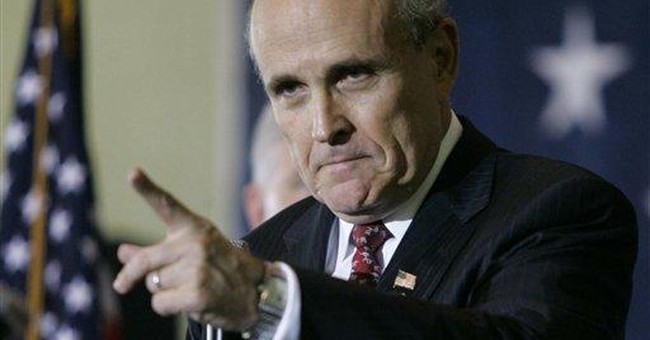 Rudy Giuliani is the real fiscal conservative in the 2008 presidential race. That's why I'm endorsing him for president.

Most Americans know that Mr. Giuliani turned around America's largest city. They know he cut crime and welfare in half; they know that he improved the quality of life from Times Square to Coney Island and everywhere in between. And they witnessed his Churchillian leadership following the terrorist attacks on 9/11.

Less well known is the mayor's fiscal record. Nonetheless, conservatives will find it impressive. He built New York's resurgence not just on fundamental police work, but also on a foundation of fiscal discipline. He cut taxes and the size of government and turned an inherited deficit into a multibillion dollar surplus.

Mr. Giuliani entered office in 1994 with a $2.3 billion dollar budget deficit handed to him by his predecessor, Mayor David Dinkins. Liberal conventional wisdom held that the only way to close the gap was to raise taxes while cutting back on basic city services such as sanitation. The new mayor rejected this advice -- in fact, he famously threw the report recommending tax hikes in the trash!

Instead, he set out to restore fiscal discipline to the "ungovernable city" -- and achieved results that Reagan Republicans can applaud.

In his first budget address Mr. Giuliani explained that he would "cut taxes to attract jobs so our people can work." While lots of politicians make promises about cutting taxes Mr. Giuliani delivered, overcoming the initial resistance of the overwhelmingly Democratic City Council. He ultimately prevailed 23 times, including cuts in sales, personal income, commercial rent and hotel occupancy taxes. He understood that these taxes were not revenue producers, but counterproductive job killers.

When he left office after eight years, New Yorkers had saved over $9 billion, while enjoying their lowest tax burden in decades. The private sector, which had been hemorrhaging hundreds of thousands of jobs in the years before he took office, produced over 423,000 new jobs. Meanwhile the unemployment rate was cut in half. Businesses responded to Mr. Giuliani's reforms by returning to the center of city life.

Controlling government spending is another pledge often made by politicians. Conservative voters now know to be skeptical of such claims. But Mr. Giuliani has a record they can have confidence in. His first budget cut spending for the first time in the city since the fiscal crisis of the 1970s -- and over the course of his administration he controlled the city's spending while federal government spending grew by over 40% and average state spending ballooned by over 60%. Mr. Giuliani always made fiscal discipline a priority: instructing city commissioners to cut agency budgets even when the deficits had turned to surpluses.

Mr. Giuliani set out to cut the size of city government, insisting that New York should live within its means. New Yorkers saw their quality of life improve with more effective delivery of services while the bureaucratic ranks were being thinned by nearly 20,000 -- a near 20% decrease in city headcount, excluding police officers and teachers. He increased the number of cops and teachers because he understood that public safety and quality education are what we expect in return for our tax dollars, not partisan job protection or union featherbedding. As mayor, he proved that government can be smaller and smarter -- more efficient and more effective.

Rudy Giuliani can unite the Republican Party and restore our traditional claim as the party of fiscal conservatism. He has already proven he can stand up to liberal special interest groups and achieve tax cuts, even with a Democrat-controlled City Council. That's the kind of leadership we need in Washington. That's the kind of leadership that will inspire the next generation of the Reagan Revolution. And that's why America's Mayor should be America's next president.