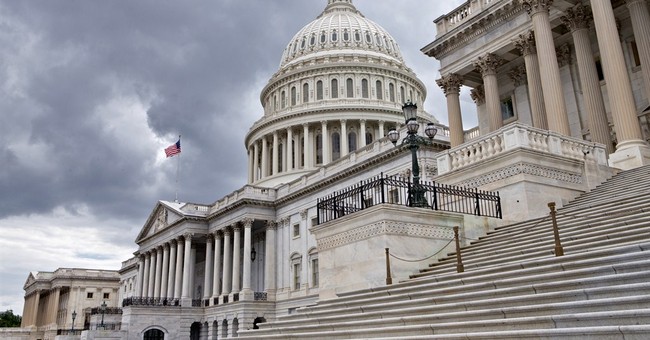 In ending the rancorous impasse that led to the shutdown of much of the federal government, Democrats and Republicans agreed they need to sit down together and address the budget to avoid a repeat of the debacle next year. And they probably will reach agreement -- to do as little as possible.

That's not because the budget picture is bright or suffers from problems that will subside on their own. On the contrary, the fiscal forecast is straight out of a Stephen King novel: scary, with every assurance it will grow ever more terrifying.

The federal debt is now equal to 73 percent of gross domestic product -- the highest since just after World War II. The only good news is that the annual deficit has been declining. But it's a brief respite. After 2015, the Congressional Budget Office figures, it will resume its upward trajectory.

Given current trends and policies, CBO said, "By 2038, the deficit would be 6.5 percent of GDP, larger than in any year between 1947 and 2008, and federal debt held by the public would reach 100 percent of GDP, more than in any year except 1945 and 1946. With such large deficits, federal debt would be growing faster than GDP, a path that would ultimately be unsustainable."

At some point, the two parties may have to take painful steps to stave off disaster. But that point is way off in the future. For now, we can expect them to perpetuate the status quo as long as they can.

Balancing the budget is never easy for our leaders, which is why the federal government almost always runs a deficit. But a glimmer of hope can be found in the four-year string of surpluses from 1998 through 2001. Maybe the solutions employed then could be revived.

But a closer look at that experience offers cause for even greater gloom. The balancing of the budget came about through events and circumstances that bear no resemblance to the present.

Back then, says fiscal analyst Chris Edwards of the libertarian Cato Institute, "politicians in both parties were afraid of deficits" -- worried they would bring on high interest rates, rising inflation and economic stagnation. Since then, it's become apparent that most economic indicators do not rise or fall on the tide of red ink -- not in the short run, anyway.

The Clinton administration also benefited from the "peace dividend" generated by the end of the Cold War. The collapse of the Soviet Union allowed us to cut defense spending to the lowest level in decades.

In the 1990s, a booming economy (and stock market) meant more people were paying taxes and fewer were collecting benefits. The baby boom generation was in its prime working years.

Today, however, the economy is in a never-ending slump. Costs for social programs, such as food stamps and Medicaid, have risen sharply, while tax receipts have not. Many boomers have reached their golden years and started to collect from Social Security and Medicare on an unprecedented scale.

So the budgetary environment is much tougher than it was then. Meanwhile, politicians have gotten more comfortable with fiscal laxity. Spending ballooned under George W. Bush and again under Barack Obama.

"Few members of either party want to cut spending," laments Edwards, who notes that among the Republican attacks on Obama is that his health care plan would cut Medicare, whose growth happens to be "the biggest single problem in the federal budget."

Today, Democrats won't tolerate new cuts in Social Security and Medicare unless Republicans agree to boost revenue. Republicans think no spending cut can justify a tax increase. Each party kindly lets the other off the hook.

Last week, The New York Times reported House and Senate budget conferees "largely agreed at a closed-door breakfast on Thursday that a deal involving significant new tax revenues and large-scale changes to Medicare, Medicaid and Social Security, whose growth in an aging population is driving long-term projections of growing debt, is not going to happen."

Nor is it a sure thing that Congress will stick with the automatic cuts mandated by the 2011 budget deal. Democrats complain they shortchange vital domestic programs, while Republicans fear they weaken the military. It's not hard to imagine a solution that would satisfy both parties.

Avoiding fiscal responsibility would mean continuing to run up huge debts and court economic ruin. But that's never stopped them before.