The Real Meaning of the "Redskins" Debate 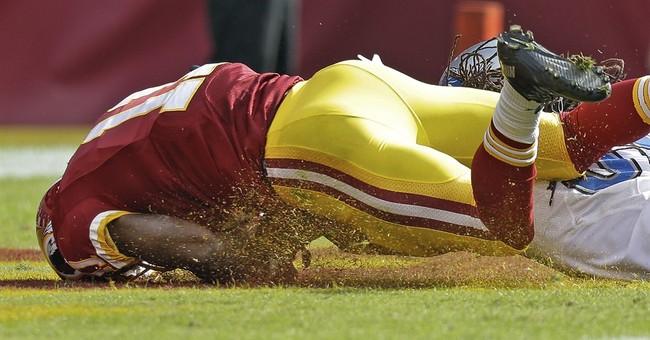 As a general rule, the names of professional sports teams, and their connotations, are of little concern. No one cares that the Chicago White Sox don't wear white socks, or that Utah, where the NBA's Jazz are based, is the last place you'd think of when you think of jazz.

But the Washington Redskins are different. Their name is a big deal. A group of Native Americans is pursuing a suit to strip the name of federal trademark protection. A few publications have stopped using the term in stories about the team.

In May, 10 members of Congress wrote team owner Dan Snyder asking him to find a new name. Snyder, however, says that will "never" happen.

Plenty of commentators have expended plenty of words arguing for and against the idea. If I were Snyder, I'd have replaced "Redskins" a long time ago. But what the team, the NFL, the courts or Congress ought to do is not the only question. Another one is: Why does it matter so much?

The difference of opinion is not a mere matter of habit or upbringing, like "you like tomato, I like tomahto." It's not a matter of taste, like preferring green to purple. It goes to fundamental beliefs and values.

For insights on the subject, I emailed Jonathan Haidt, social psychologist, professor at New York University and author of the 2012 book "The Righteous Mind: Why Good People Are Divided by Politics and Religion."

He has argued that there are several "clusters of moral concerns" that affect how people think about issues. What distinguishes liberals is that they place great value on fairness, liberty and compassion -- to the exclusion of the other factors. Conservatives don't reject the liberal values, says Haidt, but they give equal or more weight to fostering loyalty, upholding authority and respecting the sacred.

How do all these motives color the debate over the Redskins' name? For the most part, Haidt thinks the issue splits Americans along familiar ideological lines.

"The left tends to value compassion particularly highly," he told me, especially when it concerns the victims of oppression. Not surprisingly, liberals perceive the name as a racial slur against Native Americans, one of the most ruthlessly abused groups in American history. The members of Congress said in their letter that the term is "a racial, derogatory slur akin to the 'N' word among African-Americans."

By that reasoning, nothing could justify its use as a team name. Expressions of racism, however familiar or fondly cherished, have no place in society. Non-Indians have no business telling Indians they should accept something they find degrading.

So why do most people prefer to leave it alone? Not because they're all bigots. A poll by The Washington Post found that about four out of five Redskins fans want to keep the name -- and that only 11 percent of Americans support a change. In a country that has twice elected a black president, it's hard to make the case that 89 percent of the population is racially backward.

One reason for the prevailing sentiment is that many Native Americans don't object to the name. The Post reports that the leaders of three Virginia tribes -- the Pamunkey, the Patawomeck and the Rappahannock -- say it doesn't bother them. "About 98 percent of my tribe is Redskins fans, and it doesn't offend them, either," said one.

ESPN's Rick Reilly found high schools with mostly Native American student bodies that call their teams the Redskins. If even Indians disagree about the term, it's easier to justify keeping it.

Haidt says other elements also come into play. "The right tends to value group-loyalty and tradition particularly highly, and to hold symbols of their groups sacred, particularly when those groups are engaged in intergroup conflict," he said.

Traditions count for a lot among conservatives. To abandon a tradition without a very good reason strikes them as disloyal and unprincipled. Among liberals, by contrast, tradition is viewed as something less important, which is often used to excuse the inexcusable -- and sometimes has to give way to evolving standards of morality.

If we all thought it through the way Haidt does, we might have a more generous attitude toward those who disagree with us. It's too easy for either side to work itself into a lather, viewing the other side as totally clueless. But on this issue, both sides have plenty of clues. They just have different ones.