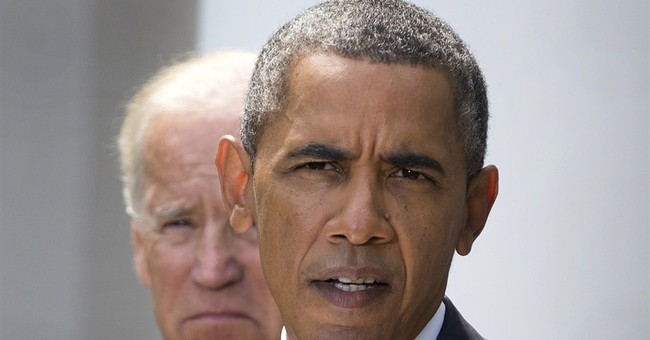 Trending
In the runup to an attack on Syria, some disenchanted voters were thinking, "This wouldn't be happening if we had elected Barack Obama." On Saturday, they got a welcome surprise: They did elect Barack Obama.

That would be the Obama who opposed George W. Bush's aggressive interpretation of presidential war powers. "The president does not have power under the Constitution to unilaterally authorize a military attack in a situation that does not involve stopping an actual or imminent threat to the nation," Obama said in 2007.

But once in the White House, Obama suddenly grasped the attractions of being free to do whatever you want without getting permission from fussbudgets on Capitol Hill. He intervened in the 2011 Libya civil war while claiming the action was exempt from the time limits in the 1973 War Powers Resolution. His refusal reached unprecedented heights of absurdity when the administration insisted that sending U.S. planes and missiles to destroy enemy targets did not trigger the law because it did not constitute "hostilities."

Obama never admitted second thoughts about how he handled Libya. And in recent days, he gave every indication that he planned to act with similar disregard for the law and the Constitution in Syria.

Facing requests that he put the question to Congress, the White House released a statement Thursday saying, "The views of Congress are important to the president's decision-making process." It sounded exactly like that recording when you're on hold that says, "Your call is very important to us." He bridled at the idea that the lawmakers were entitled to anything more than an explanation of what he planned to do without their consent.

But in the end, he had the grace and maturity of judgment to change course. Maybe he was persuaded by the letter, signed by 140 House members, that could have been taken from his 2008 position papers. "Engaging our military in Syria when no direct threat to the United States exists and without prior congressional authorization," the letter said, "would violate the separation of powers that is clearly delineated in the Constitution."

Maybe he was sobered by the sight of the British Parliament standing up on its hind legs and rejecting Prime Minister David Cameron's plan to join the attack against the forces of President Bashar al-Assad. Maybe he reviewed lecture notes from his time teaching constitutional law and realized how grossly out of step he was with the intent of the framers and the mandates of the law.

Maybe he realized that his National Security Agency's surveillance program had pushed many of his supporters to the limits of their indulgence and that they needed a reminder of why they voted for him. Or maybe Obama got up Saturday morning, saw the grinning face of Bush in his bathroom mirror, and decided it was time for a change.

In his expansive view of executive authority, Obama had not been as bad as Bush; he had been worse. Bush claimed vast powers as commander in chief but asked and got Congress to authorize the invasions of Afghanistan and Iraq. Obama went to war in Libya without giving Congress the time of day, and he apparently was ready to do the same in Syria. The craven record of legislators on such matters gave him every reason to believe he could get away with it.

A sudden reversion to his past ideals cannot be ruled out. But there were also sound political reasons to take a more inclusive approach.

Obama unwisely climbed out on a limb when he warned that any use of chemical weapons by the Assad regime would cross a "red line." He obviously feels he has to take action in following through on his threat, even if it doesn't promise to do any good. Going to Congress offers a way out: If the votes go against him, he's off the hook. Supposing Congress goes along, though, he has someone to share the blame with if things go badly.

Whatever it was, it was an overdue step toward recognizing that the person holding our highest office has only limited powers, and for good reason. When a president wants to incur the dangers of war, he had better make sure the nation is behind him. And if it's not, that ought to matter.