Why We Shouldn't Boycott the Olympics 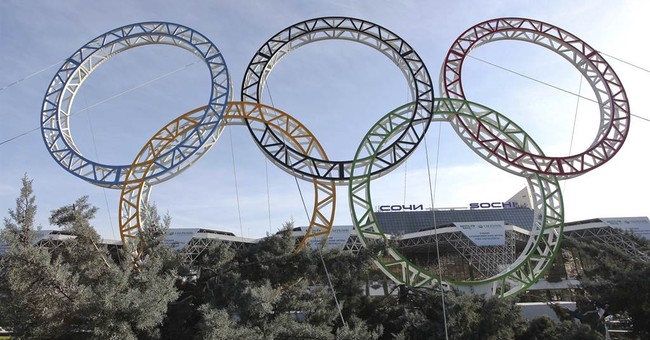 It's like 1980 all over again. There's a war in Afghanistan, the economy is lousy, Paul McCartney has a new record coming out, and some people are calling for the United States to stay away from the upcoming Olympics in Russia.

When the first talk of another Olympic boycott arose, no one took it very seriously. It came from Sen. Lindsey Graham, R-S.C., who enjoys far more face time on Sunday morning talk shows than influence over U.S. policy, and who is upset about Edward Snowden. But the idea could be gaining traction.

Some gay rights advocates, from both the United States and Russia, have urged the U.S. and other countries to stay away from Sochi this winter to protest an anti-gay law signed by Russian President Vladimir Putin in June. The law makes it a crime to engage in "propaganda" in favor of "nontraditional" sexuality among minors, which is an ominously wide net.

Human Rights Watch has said the law "is clearly incompatible with the Olympic Charter's promotion of 'human dignity,' as well as a blatant violation of Russia's international legal obligations to guarantee non-discrimination and respect for freedom of expression." Comparisons have even been heard to the 1936 Berlin Olympics, presided over by Adolf Hitler. On Friday, though, President Barack Obama said he does not favor a boycott.

It's true that the Olympic Games can be exploited for the benefit of a repressive, authoritarian government. But everyone knew all along that Putin's government views personal liberty with suspicion and malice.

It's not clear, though, that Russia is less free than China -- which was allowed to host the 2008 Summer Games. In both cases, the International Olympic Committee decided not to use human rights as the main criterion for choosing a site.

Maybe it should. But that would mean restricting the games to liberal democracies -- which could lead other governments to withdraw on grounds of second-class treatment. This approach, like a boycott, would undermine one of the central purposes of the Olympics: fostering international understanding and friendship. It would separate the world into good guys and bad guys, instead of building bridges between the two.

Back in ancient Greece, the games took place under a truce. "Wars were suspended, armies were prohibited from entering Elis (the site of the first Olympics) or threatening the Games, and legal disputes and the carrying out of death penalties were forbidden," notes the Perseus Digital Library Project at Tufts University. That allowed enemies to meet without hatred or bloodshed. To stay away from the event because it is being held in a place inhospitable to our values is to miss the point.

The International Olympic Committee says it has "received assurances from the highest level of government in Russia that the legislation will not affect those attending or taking part in the Games." If police were going to drag protesting medalists off of the podium, a different approach would be warranted. But Putin isn't likely to do something that would impress his brutality upon the world.

The last U.S. boycott, in 1980, suggests that refusing to participate will accomplish nothing of value. It was a protest of the 1979 Soviet invasion of Afghanistan. But the Soviets stayed there until 1989.

What the protest did achieve was to punish blameless athletes who had trained for years for the chance to compete in the ultimate contest. Many of them lost the chance forever. The same thing happened in 1984, when the Soviets and their satellite states paid us back by spurning the Los Angeles Games. They had no more effect on our government's policies than we had on theirs.

It's true that host governments endeavor to strengthen their hold on power by showing themselves off in the most flattering light. But as the Chinese can attest, the games also invite intense worldwide scrutiny, which in the modern media age is likely to trump any gains.

By singling out gays for discrimination, the Russian government has invited athletes to find ways to signal their belief in equal treatment -- before the eyes of the Russian people and the world. In the end, the games are likely to highlight the flaws of the ruling regime, not conceal them.

Will the games make an important contribution toward expanding gay rights and human rights in Putin's Russia? No. But that's not their purpose. Their purpose is to showcase individual excellence, honest striving and peaceful competition across national boundaries. It's not everything, but it's enough.