Obama and the Power of No 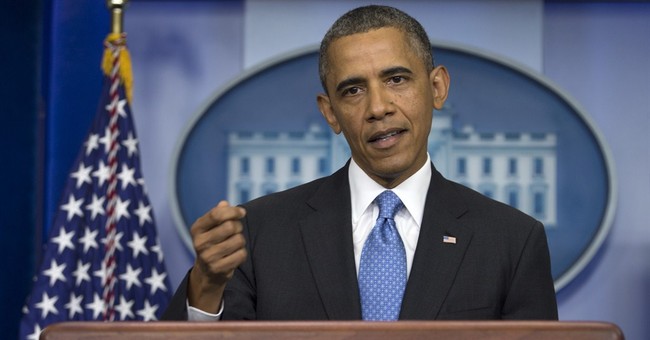 In his use of American power and influence abroad, Barack Obama's critics say he has been reluctant, gun-shy and prone to saying one thing and doing another. They're right. They're only wrong in thinking it's a bad thing.

Egypt has undergone a military coup that critics complain we either failed to prevent or failed to promote. Syria's civil war is going on with the rebels losing ground and getting little help from Washington. The administration has floated a "zero option" in Afghanistan, which would mean pulling out all U.S. troops by the end of 2014.

Obama is getting slammed for lack of aggressiveness by crusading internationalists in both parties -- who brought us the Iraq war and the Afghan quagmire. If they think he's wrong, he must be doing something right.

Afghanistan? "News of the 'zero option' damages our position in Afghanistan, erodes our standing with our allies, emboldens the Taliban and demoralizes our troops," declared House Armed Services Committee Chairman Buck McKeon, R-Calif.

The substance behind the charges is real enough. Obama has not pulled out every stop to force Egypt one way or another. The Syrian rebels have been losing ground, while the arms promised by Washington have yet to arrive. Afghanistan stands a good chance of going to hell as soon as we hit the door.

None of these situations is working out in a way that is pleasing to us. So it must be Obama's fault, and it must be his responsibility to fix them. Right?

Well, no. The beginning of wisdom about the international realm is that those are not our countries. We don't have the responsibility to dictate what direction they take, and we don't have the means to impose our preferences. When we get deeply involved, we're apt to produce results very different from what we hope.

It's true that there is often a gap between Obama's words and his deeds. This may be because he's weak and indecisive. Or it could be because he's paying lip service to avoid taking action that carries grave hazards.

The latter possibility may be damned as a cynical ruse. But the path to wise policy does not always run straight and level through a field of daisies.

Obama called for the departure of Syrian President Bashar Assad and said any use of chemical weapons would cross a "red line." In Egypt, the administration privately urged President Mohamed Morsi to make concessions to his opposition, while asking the military not to overthrow him. Neither listened.

When Obama finally agreed to send arms to the Syrian insurgents, some people hoped he was finally ready to make a difference. Alas, The New York Times reports, the help "could take months to have any impact on a chaotic battlefield" and is not likely to force Assad to the negotiating table.

That's not the worst outcome. By doing something, Obama proved his threat wasn't empty. But he avoided initiating a war that is far more dangerous for us to get into than to stay out of.

The President can't very well step way back from Egypt, our second largest aid recipient. So the State Department was obliged to make our desires known to the central players. Obama, however, is plainly averse to taking drastic action in a place outside our control -- and which has only minor implications for our security.

In Afghanistan, he acceded to the demands of his commander to expand the war. But in doing so, he insisted on an accelerated schedule for removing combat troops. The surge was a short-term concession for a long-term gain. Better than leaving early? No. But better than an open-ended project? For sure.

Obama proved in Libya that he is willing to deploy military force when the risk is low -- even if no tangible U.S. interest is at stake. But overall, he has weighted the scales against intervention and interference. Those who expected him to deploy air power in Syria, threaten an aid cutoff in Egypt and carry on an endless fight in Afghanistan seem to have misjudged him.

For now, at least, Obama is carrying out a foreign policy that errs on the side of caution, patience, restraint and economy. As for the critics, you know what? We tried their way.