Is Gay Marriage a Threat to Freedom? 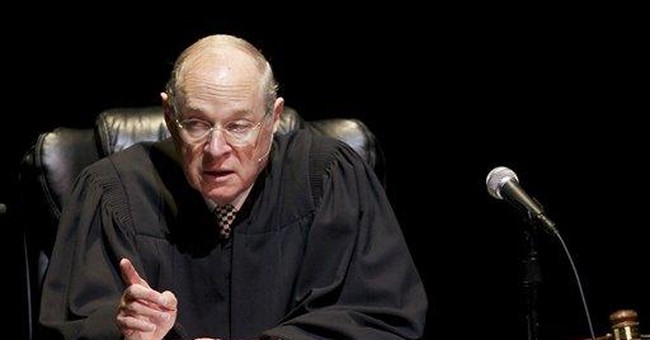 One reason Americans have moved so rapidly toward support of same-sex marriage is their stubborn bias toward liberty. When interest groups demand something material, or when they seek to take something from other groups, the public is apt to resist. But when a group asks to live and let live, it can usually count on getting its way.

Legal scholars have long thought that if the Supreme Court upheld same-sex marriage, it would base that decision on the 14th Amendment's guarantee of "the equal protection of the laws." When Justice Anthony Kennedy made the case for overturning the Defense of Marriage Act, though, he relied on a different provision. DOMA, he wrote, "is a deprivation of an essential part of the liberty protected by the Fifth Amendment."

The right to marry a person of the same sex fits perfectly within Thomas Jefferson's conception of freedom. "It does me no injury for my neighbor to say there are twenty gods or no God," he wrote. "It neither picks my pocket nor breaks my leg."

The beauty of gay marriage is that it grants something to one group that doesn't come at the expense of anyone else. Heterosexual rights are undisturbed. Straight people could marry before any state legalized same-sex matrimony, and likewise after.

That fact explains why so many non-gays have come to embrace the idea. But it presents a high hurdle for opponents of same-sex marriage. Even Americans who have moral qualms about it may not think the law should try to dictate morality.

After all, the Supreme Court said in 2003 the Constitution protects the freedom of adults to engage in sodomy -- a decision that conservatives spent five minutes denouncing and never mentioned again. (Well, except for Attorney General Ken Cuccinelli of Virginia, who wants to reinstate its ban.) It's a small step from saying people should be free to have sex with whomever they want to saying they should be free to marry whomever they choose.

So how did staunch opponents of gay rights react to the decisions striking down DOMA while upholding marriage equality in California? By claiming that it would trample on their rights.

Thomas Peters, the communications director for the National Organization for Marriage, told me, "Same-sex marriage and religious freedom don't coexist very well. In fact, they probably are mutually exclusive."

Bryan Fischer of the American Family Association called the DOMA verdict "the greatest threat to the First Amendment in history." The Liberty Institute said the rulings will mean "attempts to use government to punish those who disagree" and "create a climate of fear and oppression."

It's a bit rich for these groups to complain that the court is infringing on their freedom to infringe on the freedom of gays. Advocates of same-sex marriage are not trying to exclude heterosexuals from matrimony. They are only asking to be free to practice it, as well.

But opponents charge that churches will be forced to host same-sex weddings and their clergy will be required to perform them. Churches that refuse, they say, may be stripped of their tax-exempt status.

The likelihood that any of these fears will come to pass ranges from minimal to zero. State laws allow divorce, but Catholic priests haven't been forced to preside at the weddings of divorced Catholics. Employment discrimination laws haven't been applied to end bans on female clergy. Nor have such internal church polices led to the loss of standard tax exemptions.

The only real friction comes in areas where religious institutions provide public accommodations or act as agents of government. A Methodist organization in New Jersey lost a special tax break for an open-air pavilion after it refused to let a lesbian couple use it for a civil union ceremony. Catholic Charities abandoned the adoption business in Illinois rather than work with same-sex couples in civil unions.

Those cases may represent good or bad policy, but they're not a new thing. A hotel owner who objects to integration on religious grounds can't bar access to blacks. An organization taking state money for state contracts has to comply with state policies. Lawmakers will have plenty of these peripheral issues to argue about, but the idea that believers will suffer rank oppression is a fantasy.

The only liberty they will lose is the liberty to deprive others of their liberty. Sorry, but that's one freedom a free society doesn't offer.