Surveillance Cameras Are Not All That 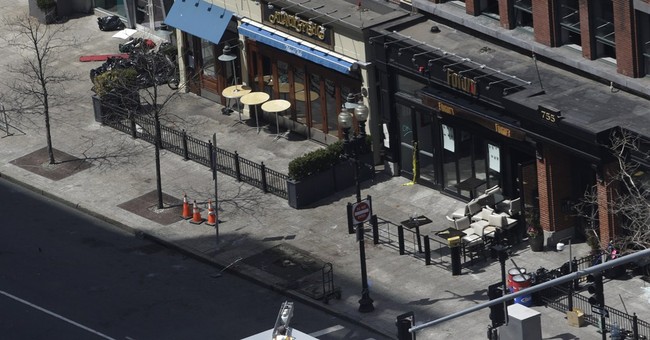 Video surveillance cameras have been growing in popularity for years, but in recent weeks their advance has gotten a turbo boost. After helping to identify two suspects in the Boston Marathon bombings, they went from occasionally desirable to universally vital.

Mayor Rahm Emanuel of Chicago, which already has some 10,000 cameras, said the city would keep on adding cameras -- perhaps outdoing his predecessor, who dreamed of a camera on every corner. New York Mayor Michael Bloomberg took a similar tack: "You wait -- in five years, the technology is getting better, there will be cameras every place."

It was seen as useful before, but the Boston attack cloaked it in glory. Three days afterward, police released images of the suspects, which apparently flushed them out. The next day, one of them was dead and the other was in custody.

There is no doubt that the cameras were a big help this time. But that doesn't mean they are generally a good idea -- much less a crucial tool in fighting terrorism and crime.

Surveillance cameras were originally touted as a strong deterrent, scaring away bad guys fearful of being caught on tape. But these devices have a disappointing record in action. In some places, they noticeably reduce crime. In others, they have the same effect as a potted plant.

In the Boston bombings, the cameras utterly failed in their preventive function. Not only did the bombings occur; they occurred in perhaps the most heavily photographed spot in America that day. Besides the permanent video cameras in operation, hundreds of spectators with cellphones were eagerly capturing the scene.

The alleged killers could hardly have been unaware of their exposure. They obviously chose the finish of the marathon precisely because of all the people and lenses that would be there when the explosives detonated. They made no effort to conceal or disguise their faces to avoid being identified.

In this instance, the footage did help in catching the culprits. But one success is not enough to validate the whole enterprise. Terrorism, after all, is an extremely rare event, particularly compared to ordinary violent crime -- and, unlike crime, it tends to occur in places of high visibility.

Putting video gear in areas that are obvious potential terrorist targets is one thing. Putting them on every corner of an entire city is another. Some places are enviably safe without surveillance, which means any cameras installed there should be color-coordinated, since they will be primarily decorative.

They will fall victim to the law of diminishing returns. If you put out a couple of mousetraps, you may catch some mice. If you put out dozens, you may not catch many more. The second 10,000 cameras won't add nearly as much crime-fighting value as the first 10,000 -- or possibly even the first 1,000.

Supporters may ask: What's the harm? One drawback is that taxpayers are not composed of cash. Buying a camera costs money; so does maintaining it and monitoring the images it generates. A dollar spent on surveillance video is a dollar that can't be spent on foot patrols, police training, DNA tests or streetlights.

Another is that cameras contribute greatly to the steady erosion of personal privacy. Americans are generally oblivious to this phenomenon because they are oblivious to the multitude of unblinking eyes watching them in the course of a day. If each of us had a little alarm that went off every time we came into camera range, we might be less agreeable to the monitoring.

Of course, the impact varies demographically. A typical middle-aged white male can count on being largely ignored by the cops watching live video feeds. In camera-rich Britain, it turns out, the eyes in the control room tend to focus on two groups: dark-skinned young males and fetching young females.

Cameras may also soften us up for even deeper intrusions. If video feeds are so great, why not add audio? If you can stand being watched whenever you leave home, surely you won't mind if every word is heard as well. And how about a tiny drone hovering over your front door, round the clock -- for the rest of your life?