Time To Tear Down Wrigley Field? 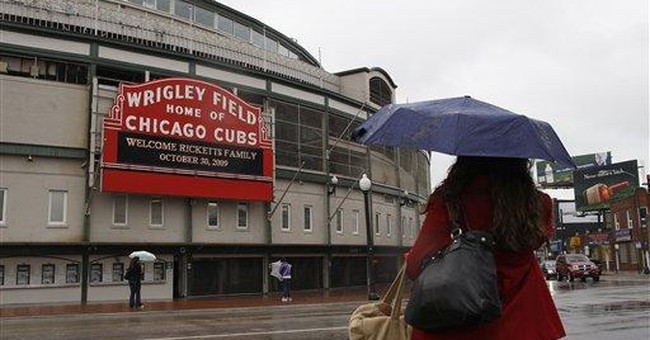 Wrigley Field: It's one of the most iconic stadiums in America, with a distinctive urban location, nearly a century of history and an old-fashioned ambience. It's the best thing about the Chicago Cubs since Ernie Banks. But, as was once the case with Ernie Banks, maybe it's time to admit that Wrigley can't go on forever.

That's the obvious conclusion to draw from the organization's request for taxpayers to "invest" up to $300 million in the park. The Ricketts family spent $845 million to acquire the Cubs from Tribune Co. last year, the highest price ever paid for a Major League Baseball franchise. But now the new owners find they can't afford the upkeep on their elderly home, which runs about $10 million a year.

So they want the state, county and city to divert a share of future entertainment taxes to help fund a major renovation. Never mind that the state of Illinois is broke and the city of Chicago has a record budget deficit.

Chairman Tom Ricketts says the owners can't justify putting more money into the park and the adjacent area "unless you know Wrigley is going to be there." Left unspoken is the prospect that it won't be there -- that the Cubs will move to new quarters in the suburbs or raze the old park and put up something suited to the needs of a 21st-century team.

Not a bad idea. Wrigley is attractive and charming in many ways, but it's like driving a vintage car: After a while, the novelty is not enough to justify the antiquated design. The ivy-covered walls and manually operated scoreboard have to be balanced against the cramped concourses, primitive restrooms, modest kitchen facilities and obstructed views.

To even think of replacing the nostalgia-drenched ballpark is heresy to diehard Cubs fans. But Yankee Stadium was even richer in history and tradition -- winning tradition, by the way -- when the Yankees abandoned it in 2008.

This year, the Dallas Cowboys managed to suppress sentiment long enough to demolish Texas Stadium, probably the most recognizable facility in the National Football League and just 39 years old. Ricketts envisions playing in Wrigley for another 50 years. In what universe does that make sense?

He argues this would be a no-lose deal for the public because all the tax revenue to be diverted to the Cubs is money that would not be generated without their presence in Wrigley. "Those are dollars that wouldn't have been spent anywhere," he said in a meeting with the Tribune editorial board.

Wrong. "These things may affect where people spend, but not what they spend," says University of Chicago economist Allen Sanderson. People allocate a certain share of their budgets for entertainment. Absent the Cubs, they will go to movies, concerts, museums, White Sox games, Six Flags Great America or Navy Pier.

But it's not as though the Cubs would be absent. Blessed with one of the biggest markets in America, and fans who turn out win or lose, they are not about to pick up and move to Nashville.

So they should be thinking of how to make the best of their location. A new park would rid the Cubs of their maintenance headaches, while providing them better ways to relieve fans of cash -- lots of luxury boxes, better dining, new shops and diversions.

It would allow the team to hire better players and pamper them in style. The architect could lovingly re-create the treasured features of the existing stadium, while omitting the shortcomings.

I am not immune to the appeal of Wrigley, though I was wearing a Cardinals cap the last time I went. But I am immune to the appeal of using tax dollars to enrich a private business. If you own a building that is falling apart, you should either sell it, spend the money to fix it up or admit it's not worth saving -- not ask your neighbors to pick up the tab.

The Cubs can command ample resources. They have the third-highest ticket prices in baseball, and they outdraw 23 other clubs.

Sure, lots of other teams have gotten government help with their parks, including the Bears and the Sox. But not only were they also bad deals for the public, they were made in an era when our governments had plenty of money to waste.

That day, you may have noticed, is over. Could be Wrigley Field's time has passed as well.